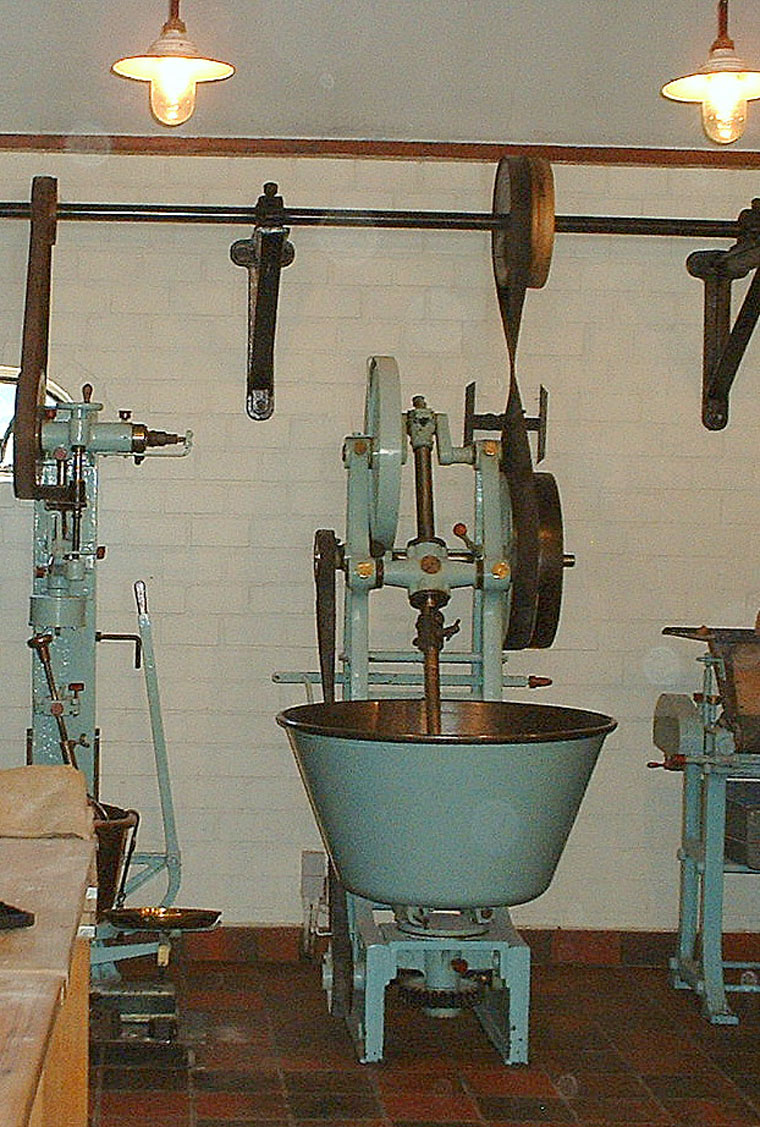 Dough mixer built to Willi Pott's original design at the Bakkersmolen Museum, Wildert, Belgium. This one was most likely built between 1907 and 1926, and was probably built by Nieulant Pelkman. 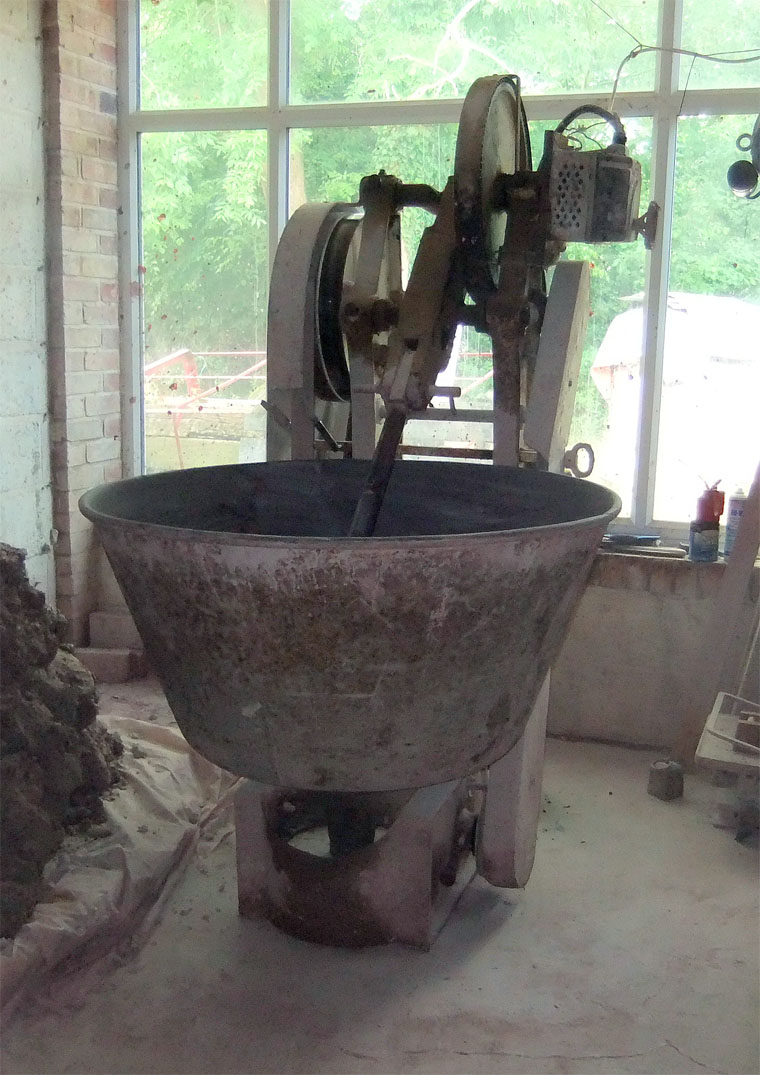 Dumbrill dough mixer at Winchcombe Pottery, Gloucestershire, used for mixing clay. This one was probably built after 1937, judging from the guards. Apart from having Pott's "slotted link portion" of 1927 (forming the upper part of the kneading arm), and the more substantial guards, the basic design has changed little since 1900. Model of Dumbrill's 1947 dough mixer, in effect a "Mk.2" version of Pott's machine. 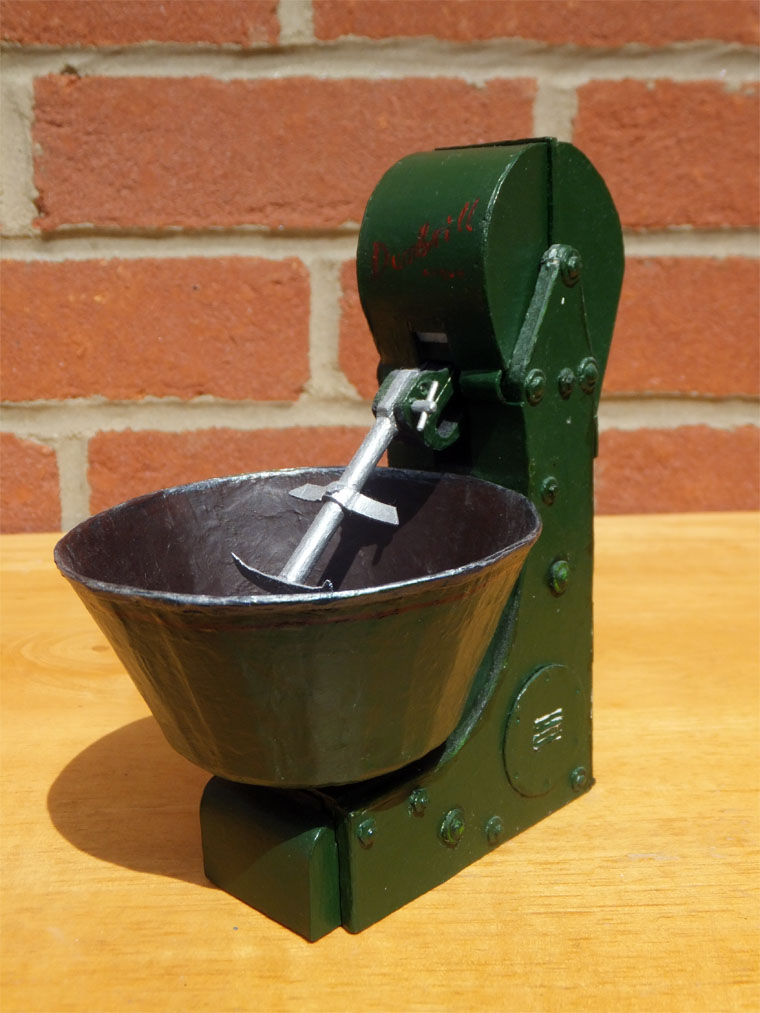 Dumbrill Plant and Engineering were a company from south London/ Surrey that made bakery equipment. They made dough mixers, cake mixers and ovens and catered for all different sizes of bakery.

Their best known product was their dough mixer, which was found in bakeries all over Britain. This was originally designed in 1900 by Wilhelm Pott of Rothe-Erde Maschinenfabrik in Aachen. It had a rotating conical bowl and a single beater that moved in and out of the bowl in an oscillating fashion. It was a type of “diving arm” dough mixer; this type of machine mimics the act of kneading by hand. As well as in Germany, Pott had quite a success with his machine in the early 20th century with the Dutch company Nieulant Pelckman, who sold his machine in both the Netherlands and Belgium.

c.1920 Albert William Dumbrill set up his business on the Queenstown Road, Battersea, initially as an electrical engineer. There was an engineering works here already, but it did not make bakery equipment. Before the War, many bakers had their dough mixers powered by stationary engines rather than electric motors. Dumbrill had an arrangement with Lister of Dursley where a baker could buy a Dumbrill dough mixer and Lister engine together. For small to medium machines, this was most often a Lister A.[1].

1927 Pott revised the upper part of the kneading arm to make the mixer run more efficiently. As well as taking out patents on this feature in Holland and Germany, Pott took out a GB patent, 273631. This new feature was described in Dumbrill literature as a “slotted link portion.” In this year Dumbrill had 2 businesses on the same site, one was an electrical engineers, and the other bakery engineers.

1930 Dumbrill applied for a patent on a “Viennese” oven of his own design.

1931 The business moved “out of town” to a purpose built factory, listed on their literature as in “Beddington Lane” or Beddington.

1947 Dumbrill took out a patent on a dough mixer (GB 609410 and 609409). It was in effect a “mark 2” version of Pott’s machine. It worked on the same principle as Pott’s machine, but was much more refined, with all the belts and pulleys placed in between the frames above the motor, and boxed in with a sheet metal casing. The motor powered a countershaft just under halfway up, and belts went from this to drive the bowl and beater. The belts were a combination of v- belts and link belts, and there was a sliding clutch mechanism to engage the motor. To start the machine, the baker would turn the motor on, and then pull a lever at the back from right to left to engage the drives.

1949 A group photograph was taken of the workforce. There were around 60 employees, including 4 women. Two of the women are most likely Bert Dumbrill’s wife Florence, and one of his daughters, Winifred. Florence helped run the business, and 4 of the 5 Dumbrill children became directors in the company; Winifred, John (Jack), Reginald and Henry.