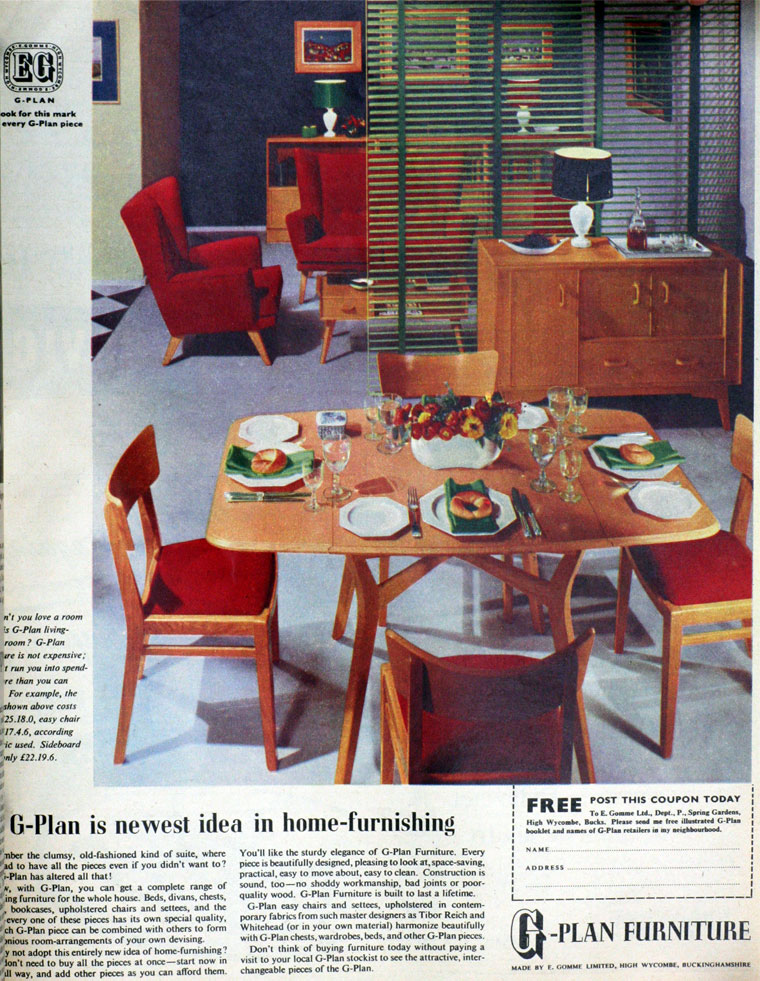 The family then moved to Totteridge Road. Ebenezer is supposed to have set up a chair workshop behind his house.

By 1903 he had installed some machine tools.

1909 New factory built in Leigh Street, High Wycombe. The company was at the cutting edge of the furniture trade in High Wycombe. The firm introduced new machinery and was the first to abandon old practices like part-time working.

1911 Ebenezer's two sons, F. R. and E. C. Gomme, were taken into partnership. The range of production began to include sideboards, tables and other cabinet goods. Gomme pioneered the concept of the dining room suits, designed and made in harmony.

WWI the company made aircraft frames.

1927 the Spring Gardens factory was built, and was subsequently extended.

1933 The firm became a limited company.

Between the wars, Gomme’s were the first to introduce the concept of the dining room suite.

By 1938 Gomme’s employed 800 people and was one of the country’s biggest furniture manufacturers.

WWII The company made aircraft frames. Manufactured parts for the De Havilland Mosquito. [1]

1943 During wartime, furniture was part of rationing in the UK; the Board of Trade set up the Utility scheme which limited costs and the types of furniture on sale. A small number of simple designs were available in oak or mahogany. Designers, such as Mr Barnes and Edwin Clinch, were on the board appointed by the Government to design the Utility line, which set the tone for British furniture making until the early 1950s.

Post-WWII. After the War, Gomme became one of the country's largest furniture manufacturers.

1953 Donald Gomme, the designer at E. Gomme, decided to produce a range of modern furniture for the entire house which could be bought piece by piece according to budgets. Advertising was part of the plan from the beginning. The furniture was advertised in magazines direct to the public. Designs were available for several years so people could collect them slowly. All furniture was marked with the distinctive brand mark - G-Plan. The G-Plan name was coined by Doris Gundry of the J Walter Thompson advertising agency – from the Gomme Plan, a plan for living. The G-Plan range appeared just at the right time – when consumers wanted a change from the limited choice of the utility furniture of the Second World War and the dark brown, chunky furniture of earlier decades. G-Plan’s light oak furniture was stylish, attractive, adventurous and had a contemporary feel. It could also be bought a piece at a time. While retailers determined the styles of furniture, which most manufacturers produced, G-Plan went over retailers’ heads and appealed directly to the public through a national advertising campaign. G-Plan pioneered the display of furniture in complete room settings with accessories. The range became hugely successful. At one point there was an 18-month delivery wait and other manufacturers copied styles. G-Plan changed radically over the decades, from light oak furniture in the early 1950s.

The success of G-Plan lead to E. Gomme becoming one of the UK's largest furniture manufacturers, with profits increasing sixfold between 1952 and 1958 when it was floated.

Another part of the direct marketing was the showrooms where the public could see the furniture. There were small centres over the country, and "The G-Plan Gallery" in Vogue House, St. George Street, Hanover Square in London.

1958 Took over Castle Brothers, with their factory in Cressex

1960 Bought Clover Mill at Nelson, Lancashire, to do upholstering work.

Early 1960s, the government introduced restrictions on hire purchase (the most common method of purchasing furniture), and in response to competition from Danish furniture the company introduced a Danish Modern range which made the rest of the range seem dated, and Gomme lost their market leading position, though they continued to be a major manufacturer making innovative designs with a very well known brand name.

By 1980 Gomme’s employed 2000 people, several hundreds with at least 25 years’ service, and there were many sports and social clubs including cricket, football, netball and bowls clubs.

1987 the Gomme family – major shareholders in the company - decided to retire. They sold the business to the then directors

1989 Sold to the Christie Tyler part of the Hillsdown Group.

1992 The High Wycombe factory was closed

1996 G-Plan furniture is still made, although now by two separate companies - the Morris Furniture Group acquired the licence to make and market the Cabinet furniture in Glasgow. The upholstered furniture is made in Melksham, Wiltshire. The company, now based at modern offices near Melksham, Wiltshire, currently operates under the name of G-Plan Upholstery Ltd.