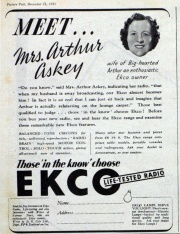 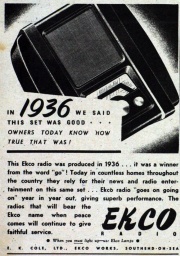 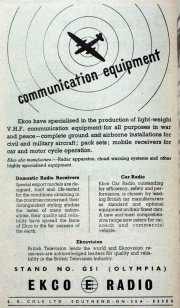 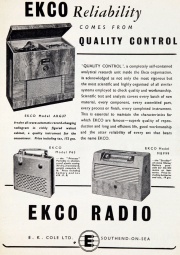 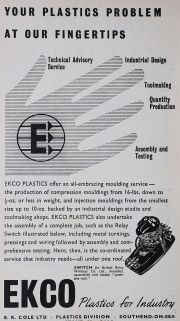 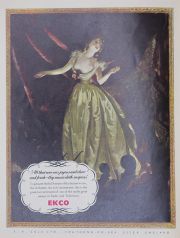 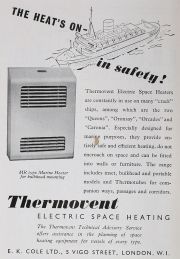 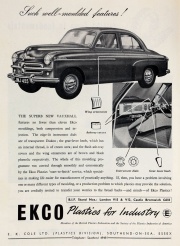 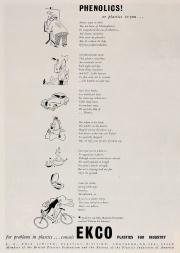 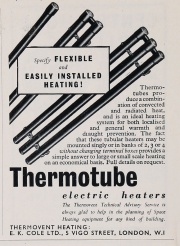 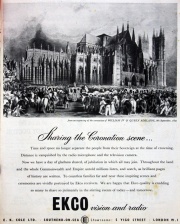 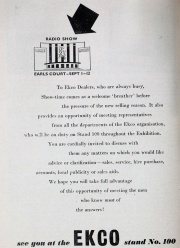 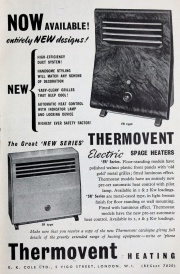 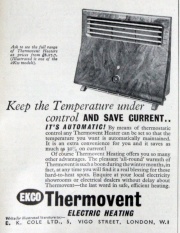 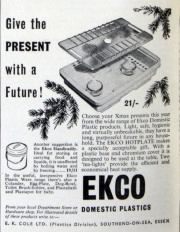 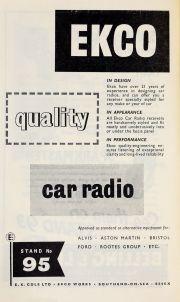 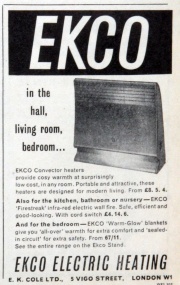 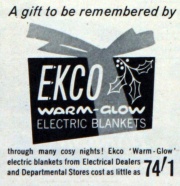 1927 Funding obtained to move to larger premises in Leigh.

1928 A. W. Martin joined the business (later to become Chief Engineer and designer of the famous round Bakelite radio) – 500 employees. Other key employees who joined at this time were John Wyborn from Marconiphone Co as Chief Engineer, and Michael Lipman as Production Engineer.

1931 First Bakelite press ordered; this was something of a gamble as Bakelite moulding required considerable capital investment in machinery that could be used economically only for very large production runs. In the event, the gamble paid off. 1,000 employees.

1932 Fire destroyed part of factory including the R. and D. labs (1932/3 prototypes lost). The firm nearly went out of business. The firm survived by introducing a new range of receivers in attractive cabinets that could not have been made in more traditional materials. These new cabinets became a pattern for the rest of the industry and helped increase Ekco's turnover to more than a million pounds in 1934

1935 Working agreement between the television firm of Scophony Ltd and E. K. Cole radio manufacturers, with investment by Cole's[3]. Scophony had produced one of 4 television systems in the UK; this was based on an optico-mechanical system suitable for commercial projection[4].

1938 Verrells resigns as Managing Director and Cole takes his place.[7]

WWII: Ekco was engaged in the production of portable radios, airborne radar sets, plastic practice bombs, and the T1154/R1155 radio sets for bombers.

1941 After the Blitz, radio- and valve-manufacture re-commenced at Southend.

1942 Full production of air interceptor radar - AI Mark 8 – which stayed in production through the rest of the war.

1943 Development started of 'man-portable' VHF military radios (Walkie-Talkies); these came into service in time for invasion of Italy. Radio sets, and wiring harness for Lancaster bombers made at Southend. Approx. 8,000 employees across all sites. Acquired Ensign Lamps

1945 Production scaled down across all sites. Ashton Clinton and Alyesbury closed down, Malmesbury continued. Southend re-commenced radio and plastics production.

1947 Began testing a Weather radar prototype in a Sunderland aircraft.

1952 EKCO Electronics Limited was set up as a separate business unit within E. K. Cole.

1954 Flight trials began on the Blue Sky at Llambeter – later at RAF Valley. Development work started on AI Mark 17. Intended as follow-on from the Blue Sky; designated for thevGloster Javelin.

1960 Merged with Pye of Cambridge as British Electronic Industries; each company retained its own operations and management initially but by 1962 the new company had complete control of Ekco[9].

1961 Eric Cole and his son Derek left board