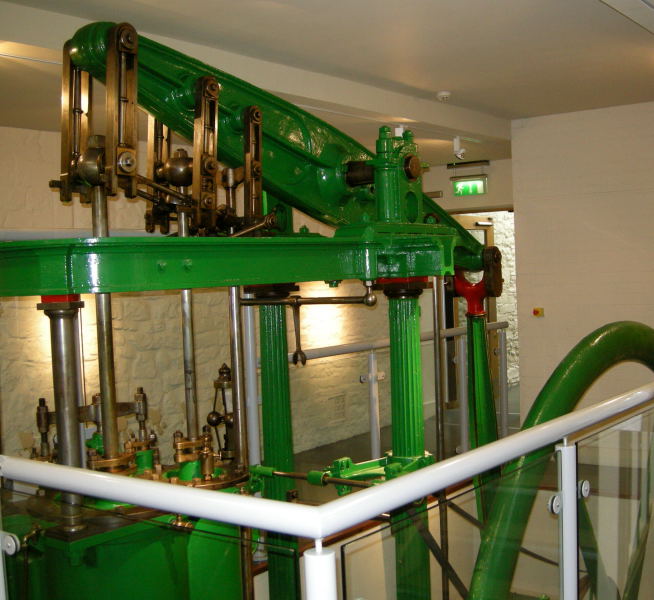 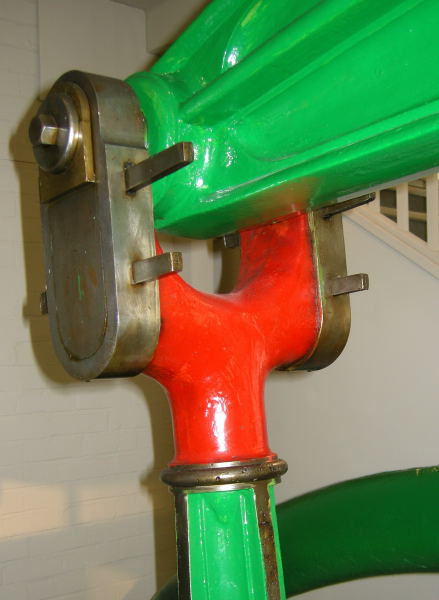 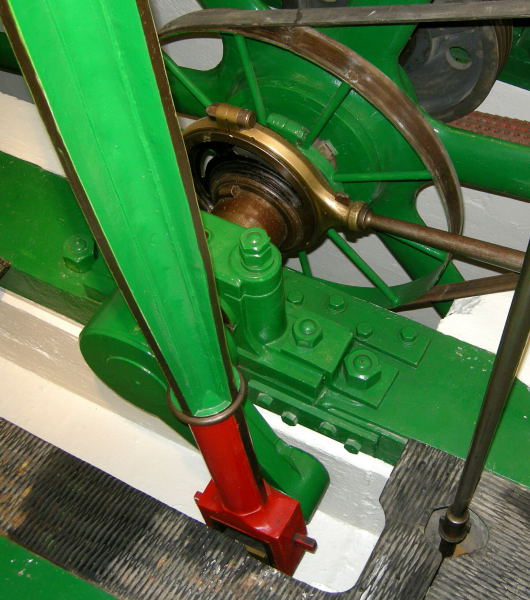 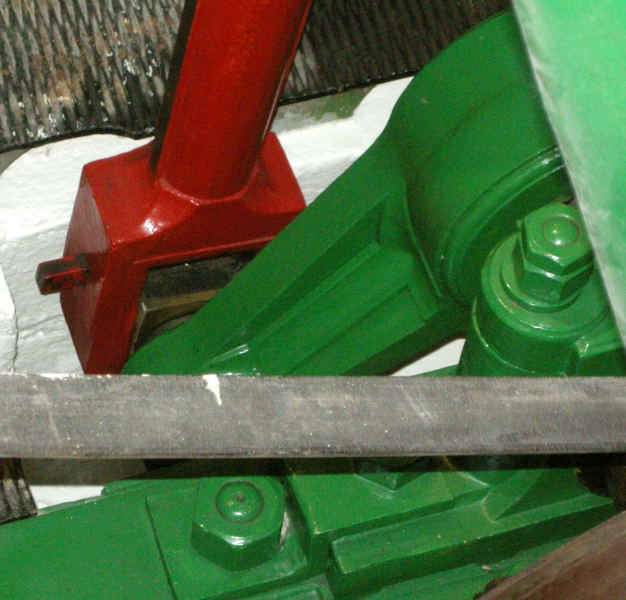 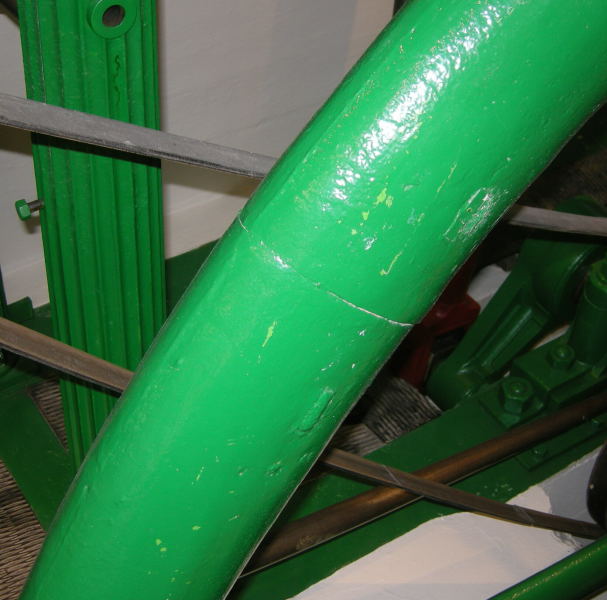 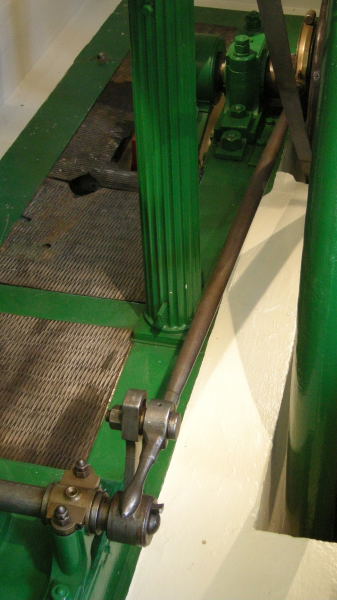 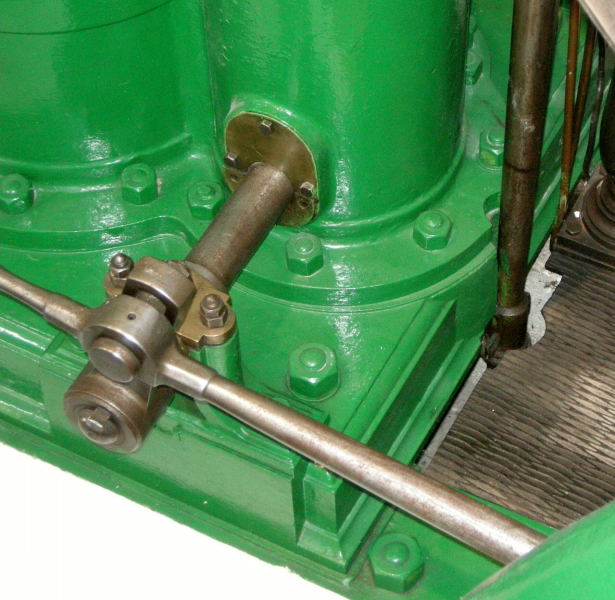 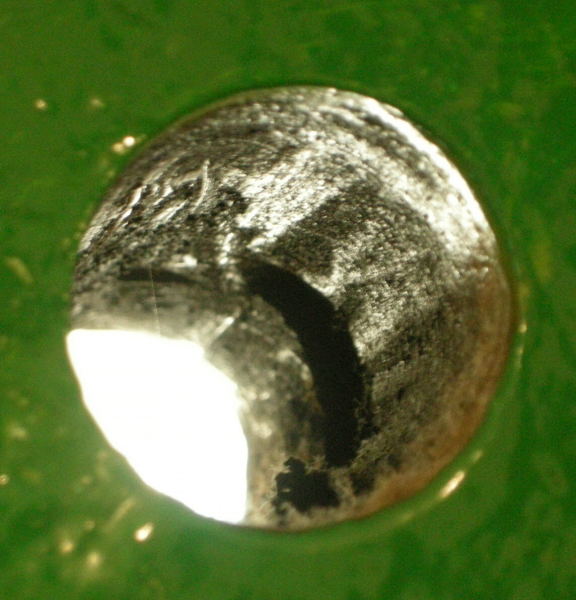 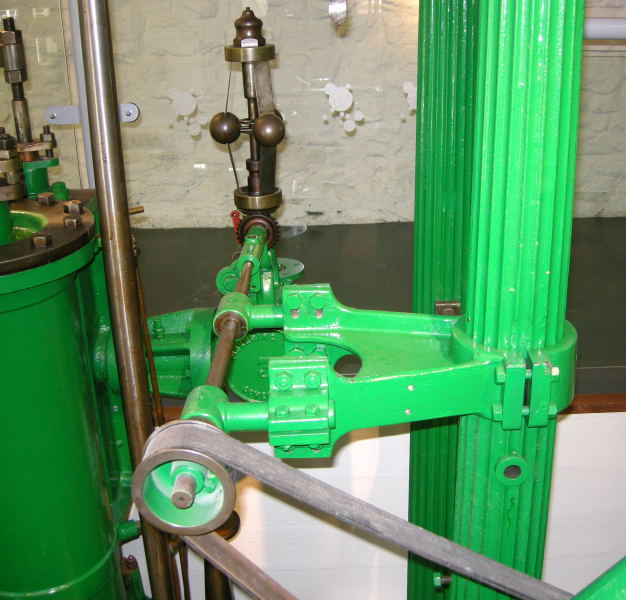 This engine was built by Easton and Amos and installed in Pearsall’s Silk Mill in Taunton, Somerset, where it worked until 1955. It is now on display in the Taunton Museum (The Museum of Somerset) in Taunton, where it may be seen turning (by an electric motor, on request).

The engine originally drove machinery via a large gear wheel on the crankshaft which engaged with a smaller wooden-cogged pinion. The gear was removed before installation in the museum.

The photographs show some details of the engine’s construction.

Photo 1: The engine is a Woolf compound. The low pressure (LP) piston is connected to the end of the beam nearest the camera. The high pressure (HP) piston comes next, followed by the air pump shaft. The piston rods are connected to the beam by U-shaped straps. Their split bronze bearings are retained by these straps and by nicely-turned compression struts, the assembly being tightened by tapered cotters.

The three pairs of links are connected to each other by a pair of rods. The innermost pair of links is also linked to the horizontal girder (note the the two bolts at the bottom of the photo). This assembly provides the parallel motion mechanism needed to keep the piston rods vertical as they move up and down.

Photo 2: The method of tightening the bearings in the parallel motion 'radius arms' is unusual. Note that the bearing is cocked, perhaps due to excessive wear. The purpose of the collars or weights is not clear.

It might be expected that the horizontal cast iron beams seen in Photo 1 would simply continue under the beam's bearing pedestals. In fact the arrangement is more complicated, as will be seen in the following photos.

Photos 3 & 4: The structure sandwiched between the bearing pedestals and the fluted columns is a complex casting, bolted to the horizontal beam mentioned earlier. It may be apparent that the section nearest the camera has been cut through: this originally extended into the wall of the engine house, as did the corresponding section on the other side. This considerably stiffened the structure, but it did in theory make the cast iron framework of the engine susceptible to movement or settlement of the building. However, since the engine ran for a century, the designer’s confidence was well-founded!

Photos 5 & 6: Showing more detail of the castings used in this part of the assembly. Plenty of mental exercise for the patternmakers and foundry moulders.

Photo 7: The beam's pivot is a close fit in the hole in the beam, a move forward from the older method of having a bigger hole and 'staking' the pivot in place. This reflects the greater availability of suitable machine tools in 1850. The escaping rusty oil shows that some slackness has developed.

Photo 8: Cast iron connecting rod, with a simple but effect method of connection to the beam.

Photos 9 & 10: Note the repair to the bedplate, to the right of the main bearing.

Photo 11: The flywheel is cast in two halves. One of the joints at the rim can be seen here. There will be an internal tie bar, loose until the tapered cotters were driven in. The castings would tend to distort on cooling, so the way the two halves match almost seamlessly, on this unmachined casting, is quite impressive.

Photo 12: This shows the rod between the eccentric and the rocking lever which operates the engine's slide valves.

Photo 13: Showing the gab gear. The horizontal rod may be lifted to disengage it from the crankpin which works the valve operating gear. This would allow the valve gear to be moved manually for manoeuvring or reversing the engine (although it could not continue to run in reverse). However, this would require a handle for moving the valve gear, and there is no handle and no obvious provision for one. It may be that a open-jawed lever, like a spanner, would be applied to the rectangular-section crank. The shaft passes through the skirt of the HP cylinder and emerges on the other side, where a bell-crank transmits the movement to the slide valves. There is bruising on this bell-crank, and it may that some sort of spanner was applied here rather than on the other side.

Photo 14: There is an unused hole in the beam (centre of photo). This could have been used for working a pump, but it was probably always redundant (a 1938 photo shows it not being used[1])

Photo 15 & 16: Peering into the hole shows what might be a blowhole in the casting

Photo 17: The Pickering governor was added much later.