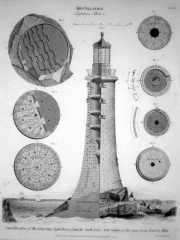 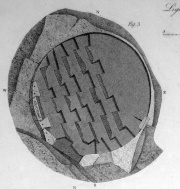 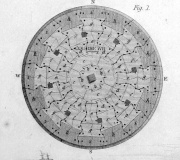 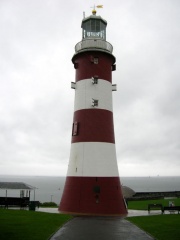 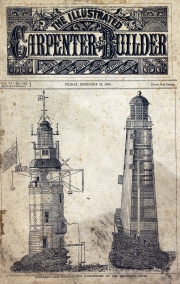 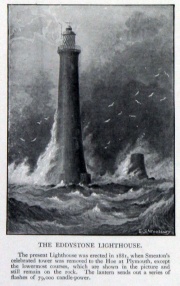 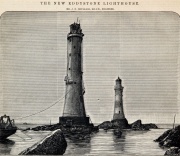 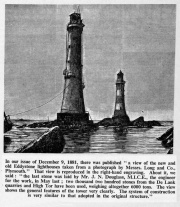 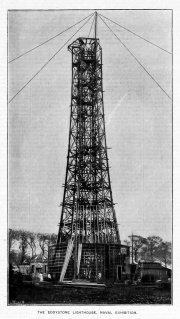 The Eddystone Lighthouse is situated on the treacherous Eddystone Rocks, some 9 miles south west of Rame Head, Cornwall.

The current structure is the fourth lighthouse to be built on the site. The first and second lighthouses were both destroyed in accidents. The third lighthouse, also known as Smeaton's Tower, is perhaps the best known of the four, because of its influence on modern lighthouse design and its importance in the development of concrete as a building material. Its upper portions have been re-erected in the nearby city of Plymouth as a monument.

The first lighthouse to be erected on the Eddystone Rocks was an octagonal wooden structure built by Henry Winstanley. Construction started in 1696 and the light was first lit on 14 November 1698. During the construction period, the lighthouse first made news when a French privateer took Winstanley prisoner, causing Louis XIV to order his release with the words "France is at war with England, not with humanity".

The lighthouse survived its first winter but was found to be badly in need of repair. In doing this, the top of the structure was removed and replaced, a fact which causes some sources to state that there have been five lighthouses on the Eddystone Rock. Winstanley's tower then lasted in its modified state until the Great Storm of 1703 erased almost all trace of it on 27 November. Winstanley was on the lighthouse at the time, completing some additions to the structure. No trace was ever found of him.

Following the destruction of the first lighthouse, a Captain Lovett acquired the lease of the rock, and by an Act of Parliament was allowed to charge all passing ships a toll of 1d per ton, both inward and outward. He commissioned John Rudyard (or Rudyerd) to design the new lighthouse, which was built as a conical wooden structure and was first lit in 1709. This design proved much more durable than its predecessor, surviving for nearly 50 years.

However on the night of the 2nd December 1755, the top of the lantern caught fire, probably through a spark from one of the candles used to illuminate the light. The two lighthouse keepers did their best to put out the fire by throwing water upwards from a bucket, but were gradually driven out onto the rock as the tower burnt down from above them. Fortunately the fire was noticed from the shore, and the keepers were rescued by boat. It is said that Henry Hall, who was one of the keepers and 94 years old at the time of the fire, subsequently died from lead poisoning because of the quantity of molten lead (from the lantern roof) he had ingested whilst fighting the fire.

The third lighthouse was perhaps the most notable as it marked a major step forward in the design of such structures. Recommended to the task by the Royal Society, civil engineer John Smeaton modelled the shape of the lighthouse on that of an oak tree, albeit an oak tree built of substantial granite blocks. He pioneered the use of 'hydraulic lime' (a form of concrete that will set under water) and developed a technique of securing the granite blocks together using dovetail joints and marble dowels. Construction started in 1756 and the light was first lit in 1759.

While in use, Smeaton's lighthouse was 59 feet (18 metres) in height, and had a diameter at the base of 26 feet (8 metres) and at the top of 17 feet (5 metres). It remained in use until 1877 when it was discovered that the rocks upon which it stood were becoming eroded—each time a large wave hit the lighthouse it would shake from side to side. Smeaton's lighthouse was largely dismantled and rebuilt on Plymouth Hoe, in the city of Plymouth, as a memorial. The foundations and stub of the old tower remain on the Eddystone Rocks, situated close to the new (and more solid) foundations of the current lighthouse - the foundations proved too strong to be dismantled so the Victorians left them where they stood (the irony of this lighthouse is that although the previous two were destroyed, this one proved to be stronger than the rock upon which it was built and could not even be intentionally taken apart).

The current, fourth, lighthouse was designed by James Douglass, using developments by Robert Stevenson of Smeaton's original techniques. The light was first lit in 1882, and is still in use. It is operated by Trinity House. It was automated in 1982, and was the first Trinity House lighthouse to be so converted. In recent years the outline of the tower has been markedly changed by the construction of a helipad above the lantern, to allow maintenance crews to gain access by helicopter.

The tower is 49 metres high, and it carries a white light which flashes twice every 10 seconds. The light is visible out to a range of 22 nautical miles (41 kilometres), and is supplemented by a fog signal of 3 blasts every 60 seconds.