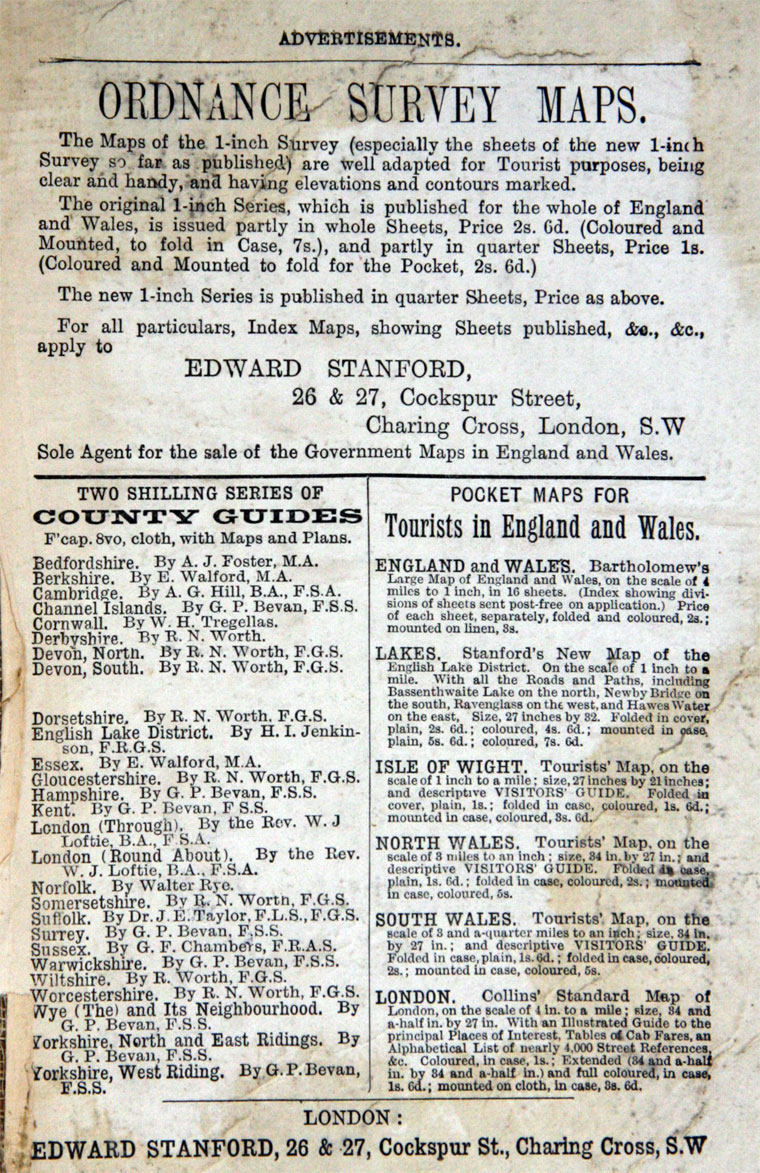 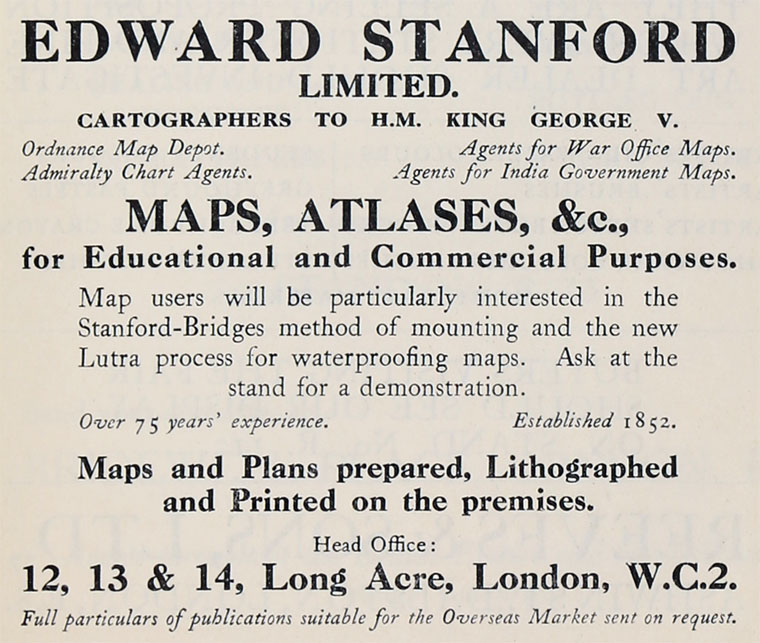 1827 Edward Stanford was born and grew up in an era of dramatic change and technological development. He was educated at the City of London School.

1848 He eventually moved to the business of Trelawney Saunders who, two years previously, had set up as seller of maps and charts in a stationer's shop at 6 Charing Cross, now 6 Whitehall.

1853 The company was dissolved and Stanford took control of the business himself.

Recognising the impact that the expansion of British colonialism and the increasing vogue for foreign travel would have on his business, Edward Stanford looked to expand his position as the only map seller in London, taking over the neighbouring premises of 7 and 8 Charing Cross, and acquiring premises in Trinity Place for use as a printing works.

In order to build his reputation, Stanford commissioned the engraving of a series of large library maps of the continents and appointed a team of surveyors to construct the first accurate map of London.

1862 Stanford's Library Map of London was published and was immediately hailed by The Royal Geographical Society as "the most perfect map of London that has ever been issued".

1873 Circumstance forced Stanford to move the shop to 55 Charing Cross and the printing works to 12-14 Long Acre.

1882 The company continued to grow and by 1882 Stanford's son had joined the business to take control of the sales and marketing.

1884 Edward Stanford was forced to retire due to ill health leaving his son in sole charge. Stanford junior decided to concentrate exclusively on maps, selling the stationery business, and arranging an agency with her Majesty's Stationery Office for the sale of Government Ordnance Survey Maps, which were becoming increasingly valuable for the conveyancing of property.

1900 Stanford set out to expand and redevelop the site at Long Acre, designing a building that would serve the dual purpose of printing works and map depot. The building was completed at the end of 1900 and continues to be the site for Stanfords' flagship store.

Over the next 50 years the company continued to grow under the supervision of members of the Stanford family.

1941 During the war, the Long Acre premises took a direct hit from an incendiary bomb and the top two floors were all but destroyed by the fire. The fear that thousands of Ordnance Survey (OS) maps had been lost was unfounded - in fact, the stacked paper, which does not burn easily, had gone some way to halting the blaze. With most of the stock saved, Stanfords continued to sell the OS maps for a number of years afterwards - often with charred edges.

1947 It was recognised that the company would have to be strengthened if it were to continue to prosper. It was thus sold to its old and distinguished rivals George Philip and Son, and Stanfords' cartographic and publishing functions were absorbed into those of the parent company.

The Philips takeover freed Stanfords to concentrate on developing itself as a specialist retailer of international maps – the role Saunders and Stanford had pioneered exactly a century earlier. Topographical, geological, thematic, nautical and historical maps were sourced from around the world. This time-consuming, specialist work gave Stanfords a unique reputation as suppliers of maps that remained unobtainable anywhere else in England.

In the late 1960s narrow profit margins were earned for the immense labour of handling and monitoring the many thousands of large-scale Ordnance Survey maps. They were stocked in their own section, where it was forbidden for customers or shop staff to enter, and it was instead staffed by unionised warehousemen - a law unto themselves who communicated with the outside world through antiquated message-tubes.

1970 To Stanfords relief, the shop ceased being the main agency for large-scale OS maps, while at the same time the advance of microfilm meant maps could be printed on demand. Twenty staff were lost, and the Ordnance Survey department, so long the core of Stanfords, virtually ceased to exist.

These changes coincided with important changes in British society. As wealth grew, people sought out new travel destinations as lifestyle statements. Worldwide travel was now obtainable for the millions and not just the elite meaning that specialist maps and an increasing number of guidebooks were now growing in demand. Meanwhile, locally, Covent Garden was redeveloped, transforming Stanfords’ surroundings into the most exciting shopping district in London.

1978 A group of young, politically motivated workers had gathered at Stanfords, and they decided the shop would be the centre of their radical activities. They aimed to create a commune, a business that was a utopia for its workers. Profit, structured management, and professional goals were dismissed as oppressive. Expectedly, their conduct became arrogant and corrupt, standards slipped, and the shop’s specialist nature was under threat of being lost and replaced with distinctly left-wing, feminist, alternative teachings.

1981 The installing of new management to bring the store back under control in 1981 meant conflict would be inevitable and the next year, when union power was supreme in Britain, a dozen staff went on strike. The doors were picketed, deliveries cut off, staff were harassed and threatened, and the police were summoned daily. The crisis lasted four months and Philips had to consider whether to close the business, but 'Stanfords improvised and survived, while the strikers melted away.

A new energy was now injected into Stanfords. The Covent Garden shop was enlarged and modernised, specialist maps were secured, and the store’s unique reputation restored. ‘Stanfords’ even reappeared on some publications. Long Acre was again in prime position to gauge which maps were being requested by the travelling public.

During the late 1990s Stanfords moved to reinforce its position in the map and book market, by opening a store in Bristol, in a first step to creating a nationwide group of specialist shops.

2001 The most important event in the company’s history for half a century occurred in 2001 when Stanfords demerged from the George Philip Group, to once again be able to navigate its own direction as it approached its 150th year of trading.