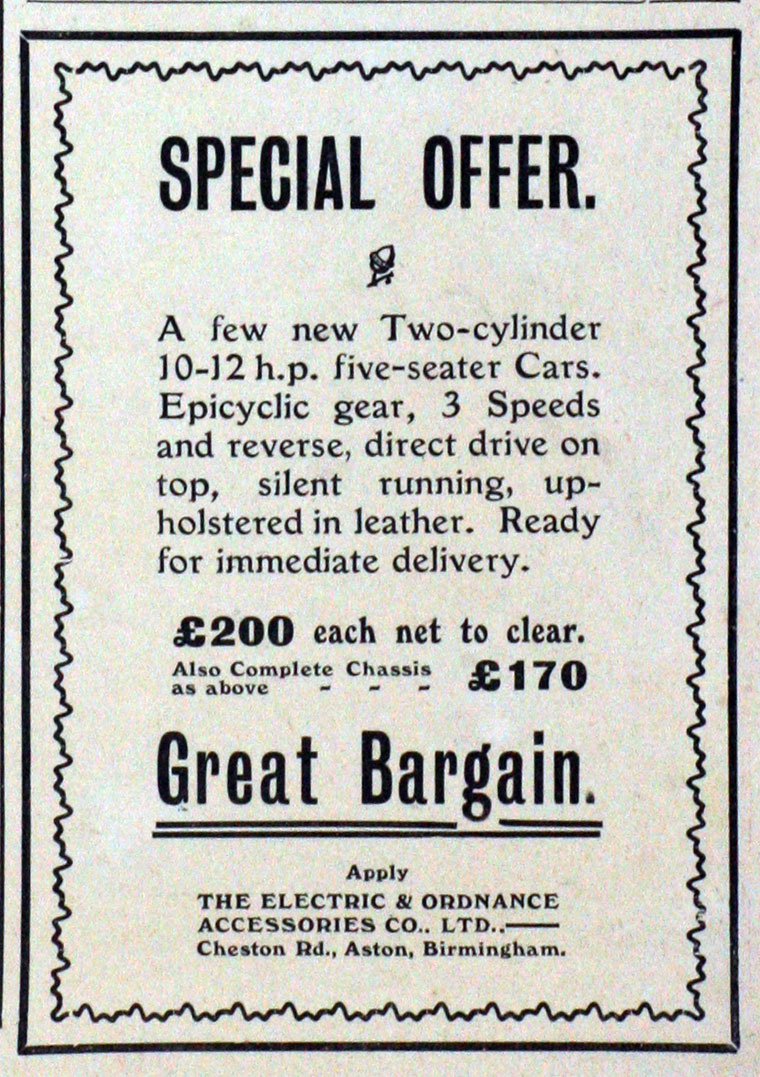 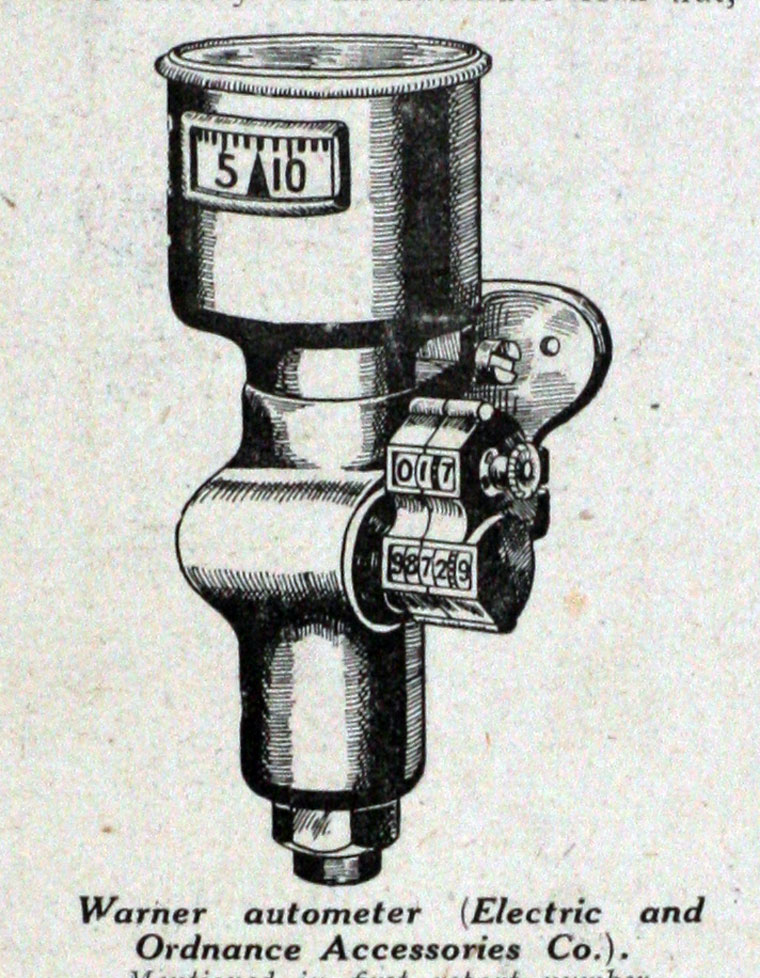 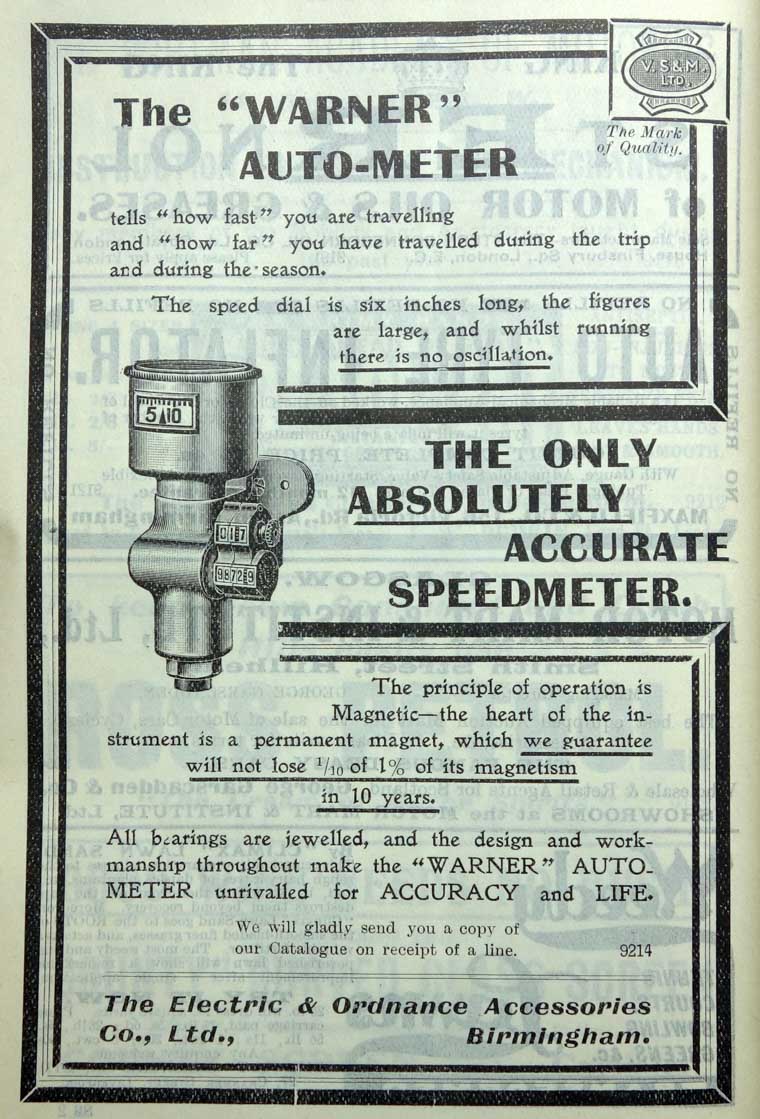 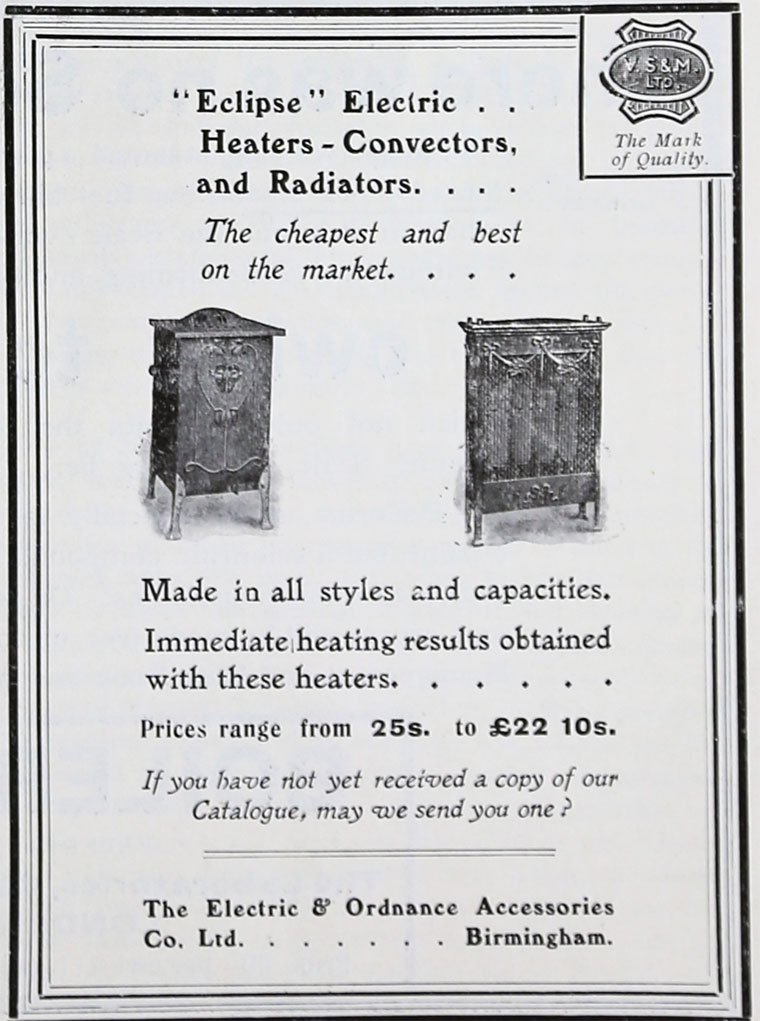 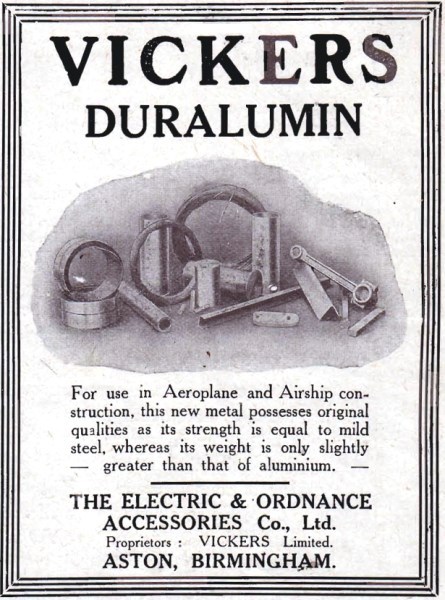 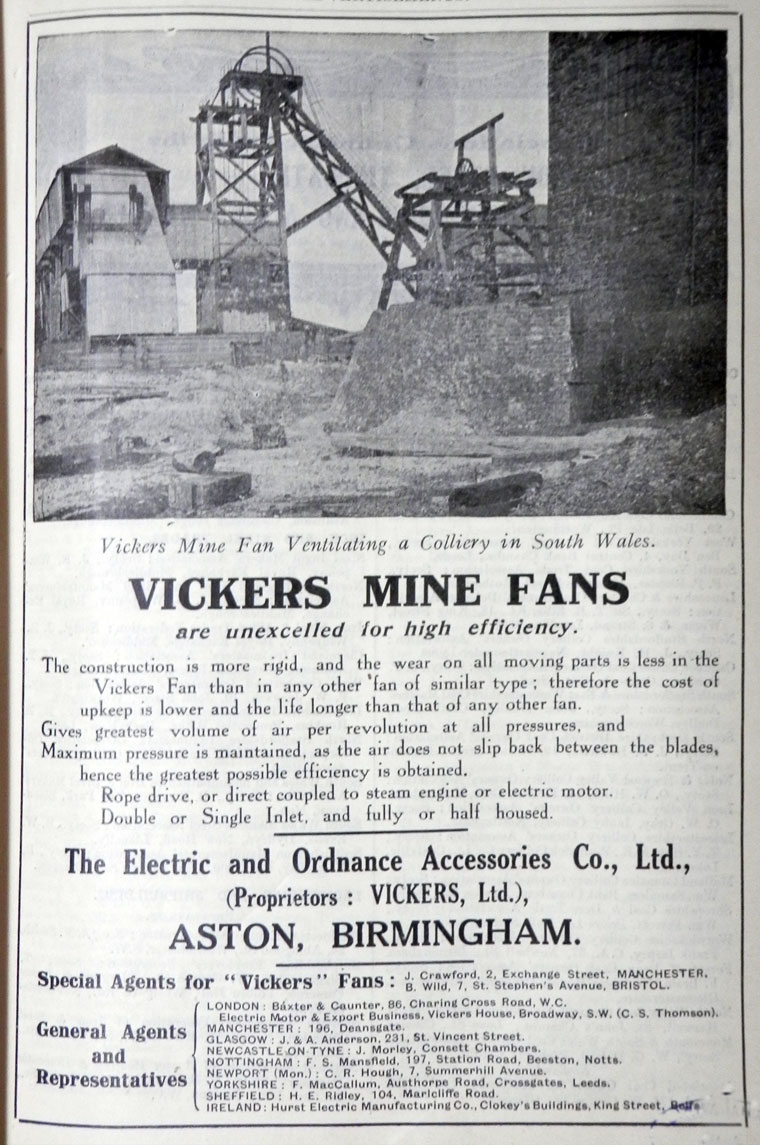 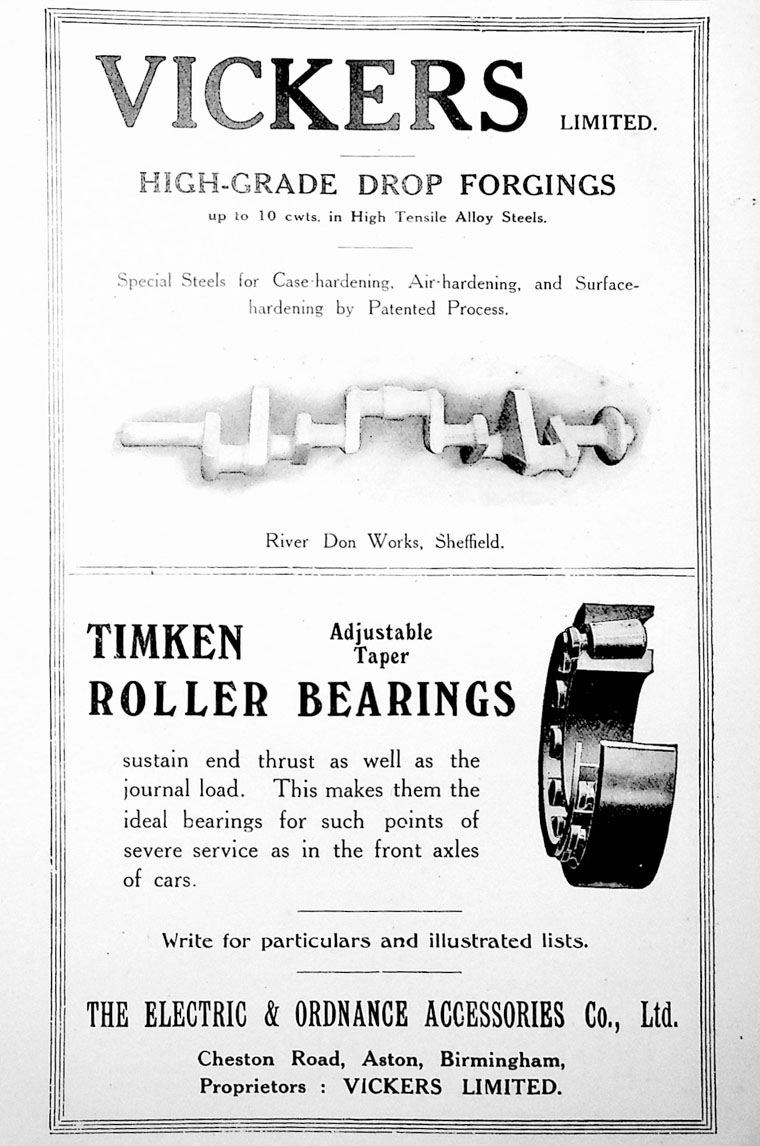 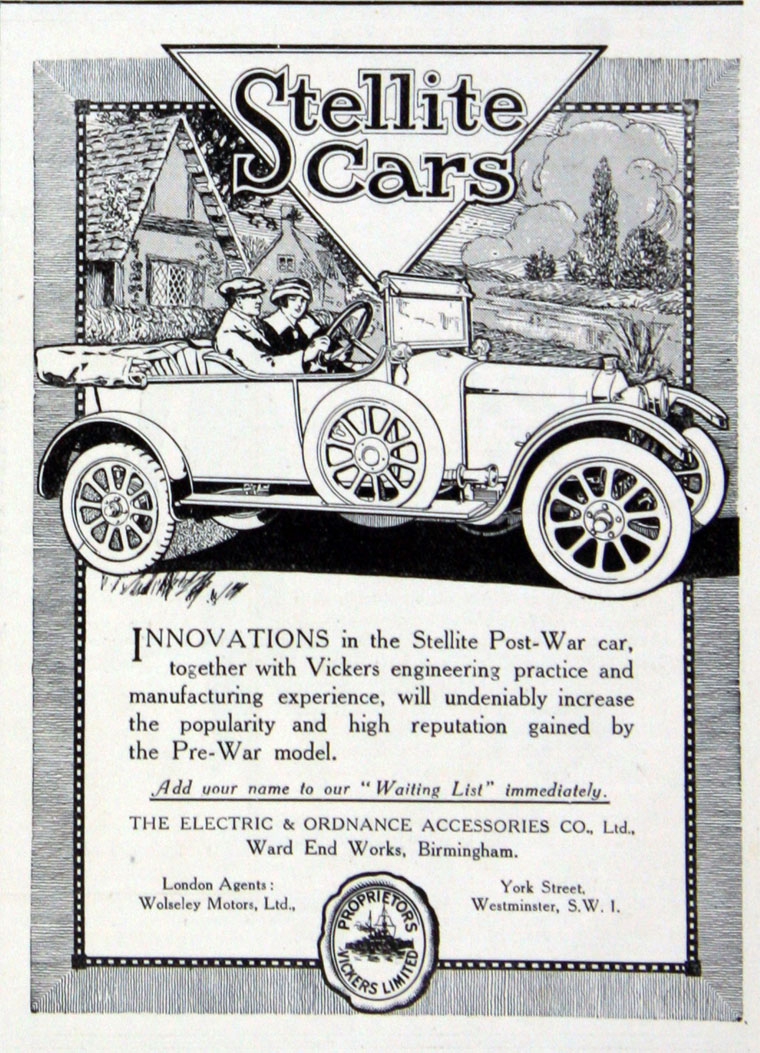 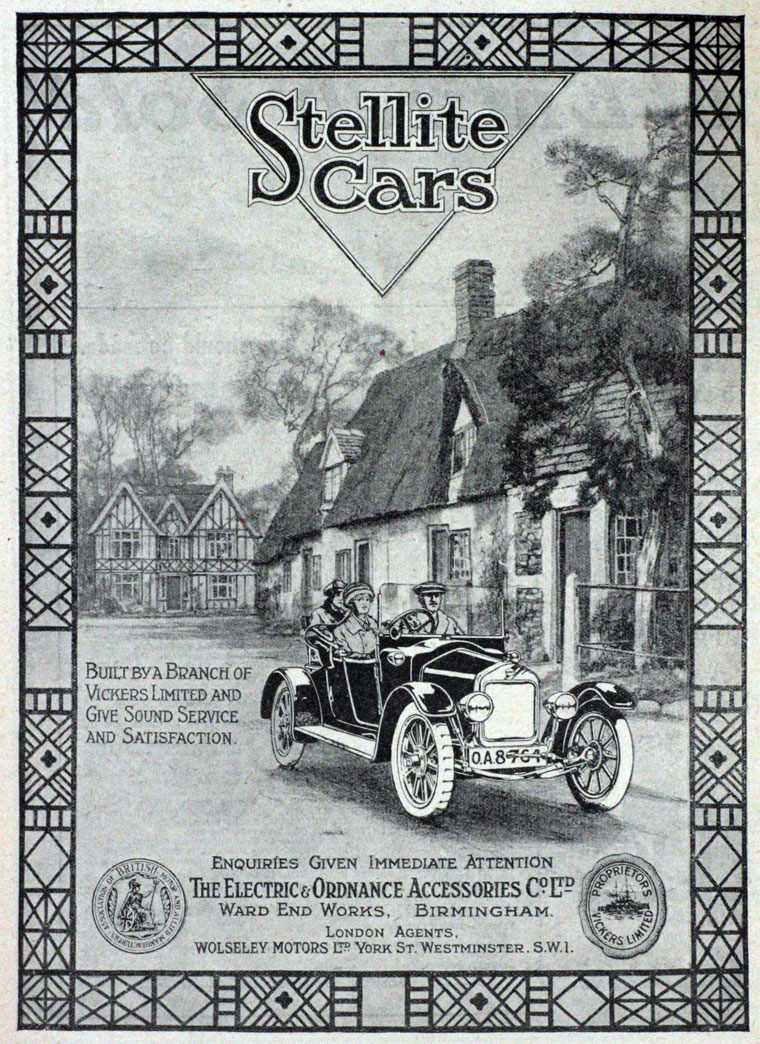 1901 The company was registered on 29 August[1], having been formed by Vickers, Sons and Maxim to carry on special branches of that Company's work.

1914 The Electric and Ordnance Accessories Company Ltd constructed a large factory between Common Lane and Drews Lane in the Ward End area of Washwood Heath. The Ward End Works covered an area of 65 acres upon completion. A distinctive feature was the Bromford House administrative block, with its 400 foot façade fronting onto Drews Lane.

1914 New light car, Stellite, made in conjunction with Wolseley Tool and Motor Car Co, another part of the Vickers company[3]

WWI made large extensions to its workshop, to 30 acres; manufactured fuses and light stampings. Also established a powder pressing plant[4]

WWI The factory was an assembly plant, produced a light car called the Stellite. During its first four years, the factory had also produced munitions fuses and shell cases for soldiers fighting in mainland Europe during World War I.

Postwar: Vickers, the owners of Electric & Ordnance Accessories Company Ltd, put the factory under the ownership of Wolseley Motors on September 30, 1919. After the change in ownership, Wolseley replaced the small workshop sheds with a large assembly building.

1920 Formed a new company: under the style and title of British Timken, Ltd., the new company was formed to take over the manufacture of the well known Timken roller bearings in Britain, formerly carried on by the Electric and Ordnance Accessories Co., Ltd. [5]

1920s Wolseley began to encounter difficulties in the 1920s and it was saved after being purchased by William Morris. As a result of the purchase, car manufacturing was completely moved from the Adderley Park site, which became Morris Commercials, to the Ward End Works. Production of the engines for the Morris Minor were also produced at the factory during the 1930s alongside the Wolseley production line.

Metropolitan-Vickers acquired the electric heating and cooking appliances business, Electric and Ordnance Accessories Co. This reflected the Metropolitan-Vickers intention of moving into selling goods of their own make than by factoring. A range of radiant fires was developed that were the first of their type.

When World War II broke out in 1939, the factory became the production base for tanks and military vehicles as well as mines. In 1941, it also began to produce the Horsa glider. By the end of the war, £500,000 worth of damage had been inflicted on the plant by the Luftwaffe in raids in 1941 and 1942.