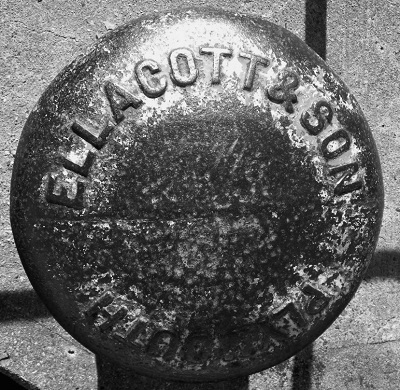 They had an establishment at East Quay at Millbay. Ellacott took over the above, previously owned by Mare, until 1857, in 1871.

The Plymouth Foundry and Engine Works Company Ltd, (previously owned by Mare until 1857), was taken over by Ellacott and Son in 1871. The Western Morning News of 27.8.1891 recorded that Ellacott and Son (Great Western Docks) had donated the sum of £1.0.0 to Hospital Saturday; which perhaps indicated the closure of works in the Town centre.

In the proceedings of the Institute of Mechanical Engineers of 1899, Ellacotts were noted as

producing goods for local requirements of various departments of the Government, County and District Councils, Harbour, Electrical, Gas, Water and other works.

The Plymouth Directory gives the last entry of this company, in 1921. It was eventually amalgamated with Willoughby Bros. Ltd., the site at this time being near the pontoon at East Quay, in the outer basin, of Millbay Dock.

1863 'GO TO JAMES ELLACOTT, the Maker, to save from 30 to 40 per cent - Engineer. Iron-founder, 6. Briton side, and Sutton Wharf, Plymouth. Steam Engines, K.O. Chaff Cutters at £2 2s, Washing, Wringing, and Mangling Machinery, and machines of every description. N.B.—Chaff Knives to pattern, and a fair trial allowed.'[1]