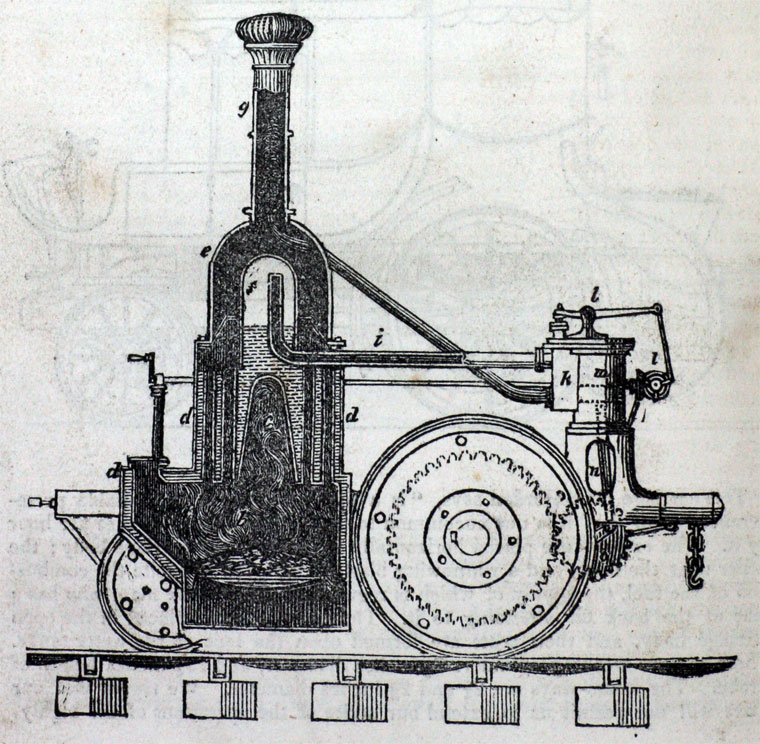 Au arrangement of the parts of a locomotive engine, possessing considerable novelty, was patented by Benjamin Hick, of Bolton, in Lancashire, on the 8th of October, 1834.

The figure affords a side elevation of the machine, with such portion as could not be readily explained otherwise in section; a is the ash-pit, b the fire-place, opening above into a dome c, of the boiler d-d, and surrounded by water; the external figure of the boiler is that of a vertical cylinder; and as the dome c occupies the centre, the water chamber is for the most part of an annular form; this annulus has passing through it vertically, numerous tubes open at each end, for the smoke and heated gases to pass from the furnace throughout the body of water, into the flue e above, and thence into the chimney g.

The draft through the furnace is increased, by introducing the induction steam pipe k, from the engine into the throat of the chimney, where a jet of steam is thrown upwards, in the way now commonly practised. f is the steam chamber, enveloped in the heated gases that ascend from the furnace, which are made to impinge upon it with greater force, by the introduction of a plate of iron shaped like an inverted funnel; i is the steam pipe, which conveys the steam from the chamber f, into the valve boxes k, worked by a series of levers at 1, that are put in motion by bevel gear, and a crank motion partly introduced.

It is now to be clearly understood, that there are three steam cylinders m, but as they are all in a row, only one can be seen in our view; each of these cylinders is provided with suitable valves, and working gear, to admit the steam on the top only of each of the pistons, at the time of the descent of each, and to allow of its escape on their ascent. The bottom of each of the cylinders is open, and the piston rods n, are jointed to the bottoms of the pistons, the latter being steadied in their motions by small lateral rods passing through guide holes.

The three piston rods act directly upon a three-throw crank, the equidistant positions of which in the circle cause the pistons to continue their reciprocating action, and the crank its rotative motion, with uniformity. Fast and slow motions, and clutch boxes for varying the speed, are provided in the usual way. In our diagram is shown a pinion o, on the crank axis, driving a wheel on the axis of the running wheels.

The patentee especially claims under his patent, the combination of two or more cylinders, each having its lower end open, so that the steam shall press only upon the upper surfaces of the pistons, and communicate its power to the crank shaft, or running wheels, in a downward direction only: which he considers will cause a greater adhesion between the wheels and the rail, and less vibration to the carriage, than when the power is applied to the wheels in an upward and downward, or a forward and backward direction, alternately.

The wheels applied to this locomotive also possess some novelty, and are claimed under the patent right. They may be briefly described to consist of a cast-iron nave, duly formed and turned, to receive the edges of discs of plate-iron, in lieu of spokes ; the felloes or external rings being fixed to the discs by first expanding their circumference by heat, and allowing them afterwards to contract, so as to receive the edges of the discs in grooves turned to receive them. The several parts are afterwards secured by bolts, screws, rivets, and keys, in a manner too well understood to need description.