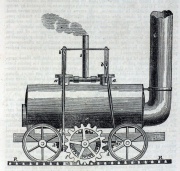 In the year 1811, a patent was taken out by John Blenkinsop, coal viewer, of Middleton, in Yorkshire, for "certain mechanical means by which the conveyance of coals, minerals, and other articles is facilitated, and the expense attending the same rendered less than heretofore."

The specification of this patent informs us that it consists of the application of a rack or toothed rail, laid down on one side of the roadway from end to end. Into this rack a toothed wheel is worked by the steam-engine; the revolution of which wheel produces the necessary motion, without being liable to slip in descending a steep inclined plane.

The accompanying figure will convey to our readers an idea of Mr. Blenkinsop's plan: The boiler x is placed on a wooden or cast-iron frame y. Through its interior passes a wrought-iron tube, of sufficient diameter to hold the fire and grate; this tube is carried out at the farther end of the boiler, when it is bent upwards, and continued sufficiently high to form the chimney z. a-a are two working cylinders fixed in the boiler, and which work in the usual way; the piston rods are connected by cross heads to the connecting rods b-b. These connecting rods are brought down on each side of the boiler, and there joined to the cranks c-c, (there being corresponding cranks on the other side of the machine,) which are placed at right angles to each other; consequently the two cranks on the first shaft are horizontal, and at their greatest power at the time the other two are passing the centre.

Upon these shafts are fixed (under the boiler) two small toothed wheels, which give motion to a larger toothed wheel fixed upon an intermediate axis. A toothed wheel f is firmly keyed to the end of the same and revolves with the intermediate wheel. The teeth of f correspond with, and work into a rack R-R, stretched along one side of the railway. Motion, therefore, is given by the pistons to the wheels d-d, which they communicate to the cog-wheel f; a progressive movement being given to the carriage by the teeth of f taking hold of the rack.

The only objection made to this machine by Mr. E. Galloway is, "that the power is applied on one side only, which must have a tendency to force the flanges or projecting rims of the supporting wheels against the edges of the rails, by which an extra friction would be produced. This, however, is a trifling inconvenience, and is not found in practice to deduct much from the effect of the engines, several of which have, since the date of the patent, been in constant use in drawing coal waggons between Middleton colliery and Leeds."

The ingenious Mr. Galloway observes that by this machine a load may be drawn up a much greater declivity, than by the locomotive of Messrs. Trevithick and Vivian. But this observation, which appears to be repeated by every author on locomotion in succession, only serves to show, that they never read the specification of those able engineers; otherwise, it would be readily perceived that the "cross-grooved" peripheries of the wheels, and the suitable "fittings to railroads," had reference to this very invention of Blenkinsop's. It however seems that those eminent men were not only deprived of the just reward of their labour and talents, but that they were on all hands subjected to the mortification of seeing their beautiful inventions ascribed to after-comers, by whom, or their friends, those very inventions were actually employed to disparage the real inventors!

Mr. Partington, in his history of the steam-engine, says, that Mr. Blenkinsop, in reply to queries put to him by Sir John Sinclair, stated that his patent locomotive engine, with two eight-inch cylinders, weighs five tons; consumes two-thirds of a hundred-weight of coals, and fifty gallons of water per hour; draws twenty-seven waggons, weighing ninety-four tons, on a dead level, at three and a half miles per hour; or fifteen tons up an ascent of two inches in the yard; when "lightly loaded" it travels ten miles an hour, does the work of sixteen horses in twelve hours, and costs £400.