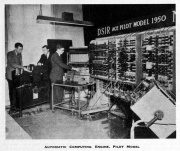 1949 the National Physical Laboratory chose the English Electric Co as industrial partner in computer development, following its Automatic Computing Engine (ACE) project; industrial input was seen to be needed to improve reliability and performance of the machine. The new computer was called the Digital Electronic Universal Computing Engine (DEUCE) [1].

English Electric, as a big engineering company, needed computers, as did the Royal Aircraft Establishment, making a small but specific initial customer base for DEUCE[2]. Seven DEUCES were built at the Nelson Research Laboratories at Blackheath, with first delivery in 1952.

1954 Recognising the commercial potential of DEUCE, further development and production was transferred to the recently formed Industrial Electronics Department at Kidsgrove.

1955 the first Kidsgrove version of DEUCE was released. Eventually 32 of these machines were made and very widely used, especially in scientific establishments but also in some commercial roles[4]

c.1958 Production of the LACE II computer was transferred to Kidsgrove but further use was cut short by the increasing competition of digital computers.

When the time came for a new range, English Electric went across the Atlantic to its partner, RCA, rather than developing the Leo marque, though installations continued to operate very successfully for several years afterwards. EELM worked with RCA to re-engineer the RCA501 to become the KDP10 (later the KDF8), aimed entirely at the emerging commercial marketplace.

The KDF9 was another computer developed at Kidsgrove. It was technologically independent of the earlier machines, and was attractive to computing-intensive customers.