Grace's Guide is the leading source of historical information on industry and manufacturing in Britain. This web publication contains 148,470 pages of information and 233,894 images on early companies, their products and the people who designed and built them. 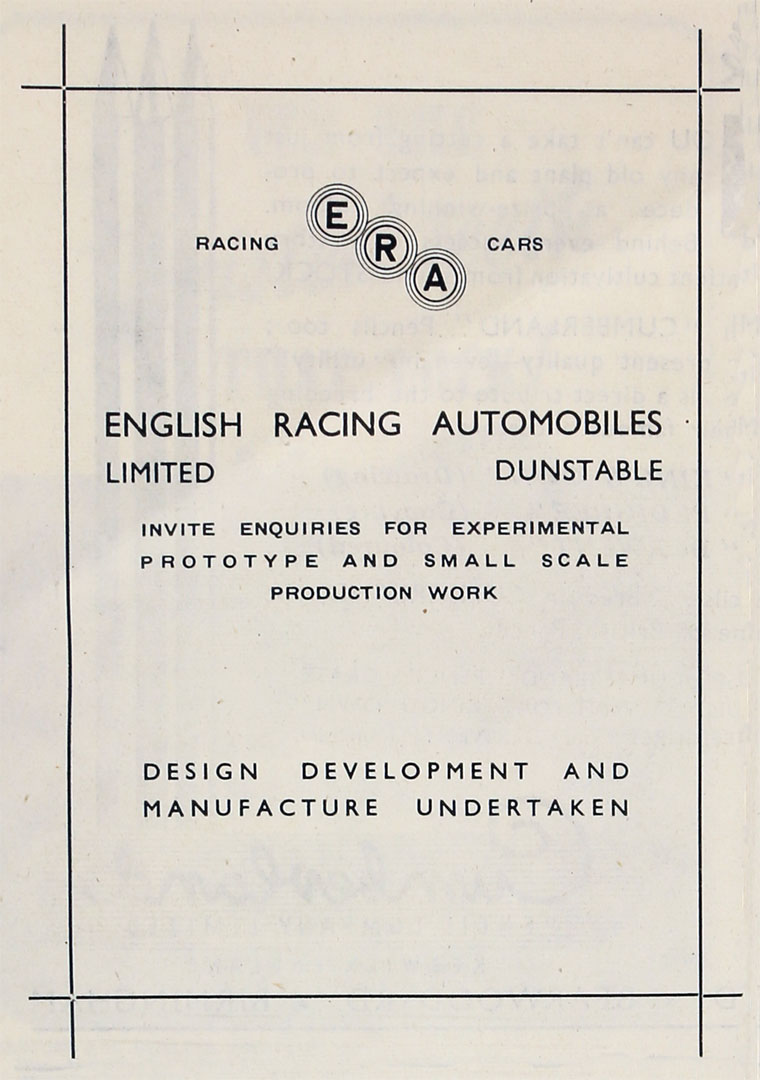 1933 English Racing Automobiles (ERA) was launched at Raymond Mays' home at Bourne, Lincolnshire in late 1933. Humphrey Cook, who had inherited a large fortune from his family's drapery business, had suggested forming a company to develop a British racing car with a Riley engine to compete in international Voiturette class events, and offered to back the project financially. Other enthusiasts contributed - Peter Berthon, Murray Jamieson and Reid Railton as designers; Raymond Mays was fund-raiser and driver; Victor Riley agreed to co-operate; the badge was designed by Gordon Crosby.

1934 The first ERA car was unveiled at Brooklands. The firm initially ran purely as a works team but, later, models were sold and raced privately by Earl Howe, Dick Seaman, Prince Bira, the band leader Billy Cotton, and others. The chassis for the cars were constructed by Thomson and Taylor at Brooklands based on a design by Railton.

Though initially dogged by handling problems, ERAs "were the first cars for many a year to represent Britain in international motor racing and bring it regular success at such level". They dominated the 1500cc class despite strong pressure from the Italian makers.

1935 At the Nürburgring, ERAs took four of the first five places. Mays himself won the race.

1939 After a works team of 3 cars participated in some races early in the season, Humphrey Cook withdrew his sponsorship[1] having opposed the plans of Mays and Berthon to establish Automobile Developments Ltd, for the production of distinctively British grand prix cars. A public fund was attempted to keep the team in operation. Cook wound up ERA's Bourne operation, while the plans of Mays and Berthon were suspended with the outbreak of the Second World War.

In June 1939 Mays achieved a 37.37 second run in an ERA R4D at the Shelsley Walsh speed hill climb, which was not bettered for ten years.

Post WWII: The final 2 cars produced before the war were acquired by private owners. Humphrey Cook still controlled ERA; he proposed to make a modified version of the last pre-war design in his new workshops at Dunstable[2]

ERA was acquired by Leslie Johnson who re-established operations at Dunstable.