Grace's Guide is the leading source of historical information on industry and manufacturing in Britain. This web publication contains 138,256 pages of information and 223,663 images on early companies, their products and the people who designed and built them. 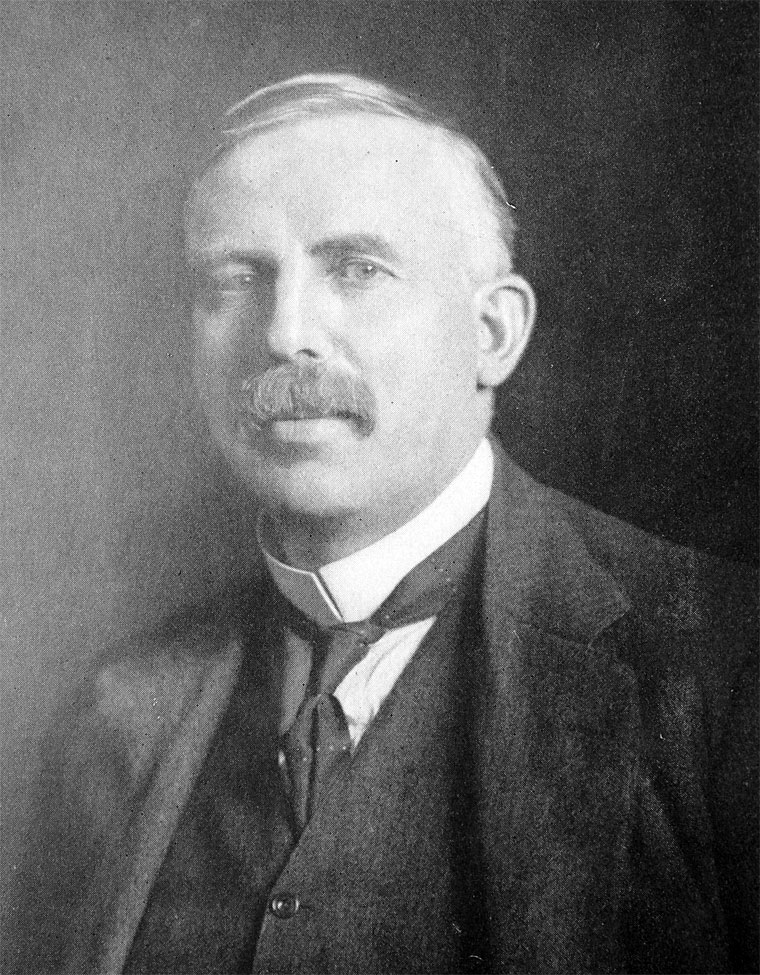 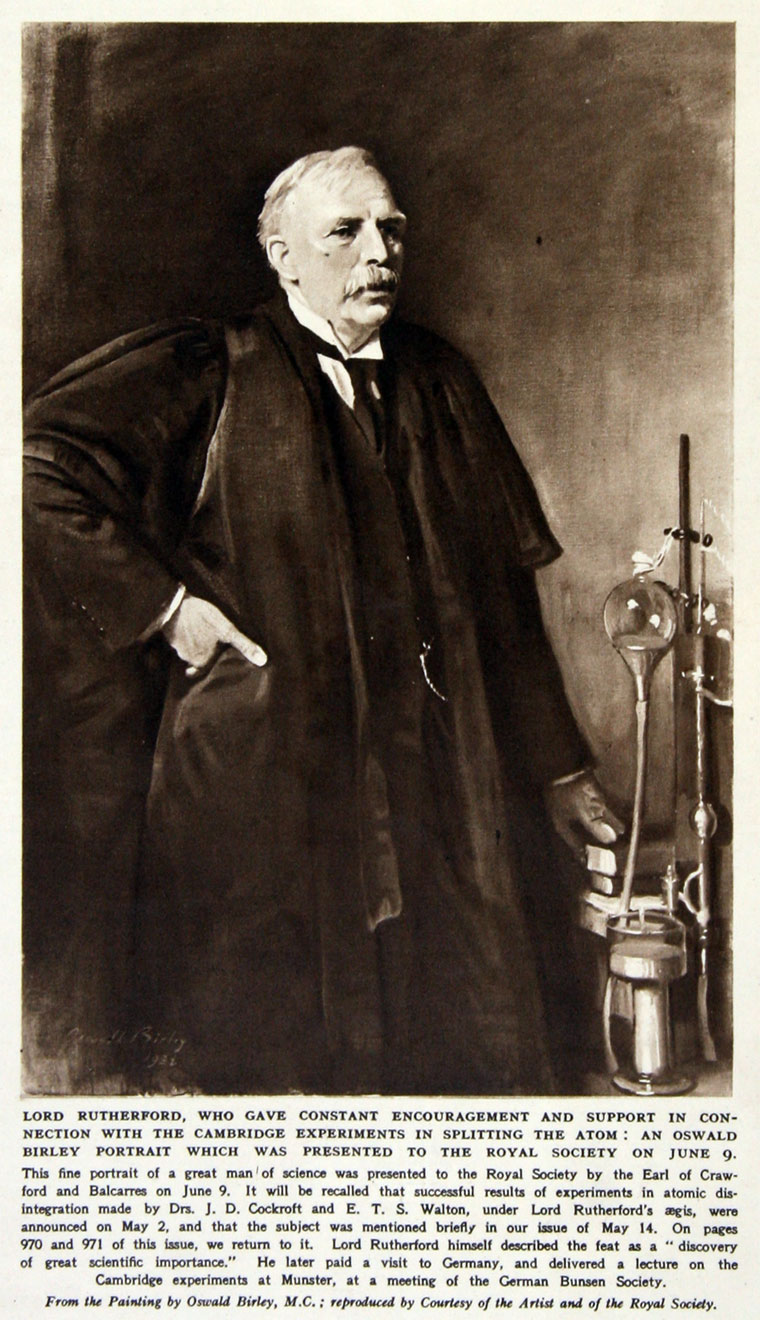 In early work he discovered the concept of radioactive half-life, proved that radioactivity involved the transmutation of one chemical element to another, and also differentiated and named alpha and beta radiation. This work was done at McGill University in Canada. It is the basis for the Nobel Prize in Chemistry he was awarded in 1908 "for his investigations into the disintegration of the elements, and the chemistry of radioactive substances".

Rutherford moved in 1907 to the Victoria University of Manchester (today University of Manchester) in the UK, where he and Thomas Royds proved that alpha radiation is helium ions. Rutherford performed his most famous work after he became a Nobel laureate. In 1911, although he could not prove that it was positive or negative, he theorized that atoms have their charge concentrated in a very small nucleus, and thereby pioneered the Rutherford model of the atom, through his discovery and interpretation of Rutherford scattering in his gold foil experiment. He is widely credited with first "splitting the atom" in 1917 in a nuclear reaction between nitrogen and alpha particles, in which he also discovered (and named) the proton.

Rutherford became Director of the Cavendish Laboratory at Cambridge University in 1919. Under his leadership the neutron was discovered by James Chadwick in 1932 and in the same year the first experiment to split the nucleus in a fully controlled manner, performed by students working under his direction, John Cockcroft and Ernest Walton. After his death in 1937, he was honoured by being interred with the greatest scientists of the United Kingdom, near Sir Isaac Newton's tomb in Westminster Abbey. The chemical element rutherfordium (element 104) was named after him in 1997.

The Rt. Hon. Lord RUTHERFORD, O.M., LL.D., D.Sc., Ph.D., M.A., who was elected an Honorary Member of the Institution in 1934, in recognition of his distinguished contributions to physical science, was born near Nelson, New Zealand, in 1871. After a brilliant career at Canterbury College, Christchurch, he was in 1894 awarded a scholarship by the Commissioners of the 1851 Exhibition, and came to England, where he studied under Professor (afterwards Sir) J. J. Thomson, Hon. M.I.Mech.E. His early work consisted in investigating the effect of oscillating currents upon a highly magnetized needle, which he used in designing a remarkable detector of electric waves. About the year 1897 he commenced his famous researches on radio-activity, which were stimulated by Professor Thomson's experiments on electrical discharges through gases, and extended the work to include first, the ionization of gases produced by X-rays, and finally the radio-active effects produced by the rays discovered by Becquerel.

In 1898 he was appointed Macdonald Professor of Physics at McGill University, Montreal; he was subsequently invited to occupy the Langworthy Chair of Physics in the University of Manchester, and returned to England in 1907. Here he carried out some of his most important experimental work in establishing his theory of atomic structure. In 1919 he was appointed Cavendish Professor of Physics at the University of Cambridge. His greatest work during the succeeding years was in his researches on radium emanation and the structural relationship of the elements, leading up to the new conception of the "transmutation of the elements."

Lord Rutherford, who was knighted in 1914, was created Baron Rutherford of Nelson, of Cambridge, in 1931. Scientific and technical societies throughout the world accorded him their highest honours in recognition of his brilliant experimental work and his revolutionary deductions in physical science. He was awarded the Nobel Prize for chemistry in 1908, the Rumford and Copley Medals of the Royal Society, and the Faraday Medal of the Institution of Electrical Engineers, of which he was an Honorary Member. In 1925 the Order of Merit was conferred upon him, and in the same year he was elected President of the Royal Society, an office which he filled until 1930. He was appointed Professor of Natural Philosophy at the Royal Institution, London, in 1927, in succession to Professor Sir J. J. Thomson.

The details of his work were published in numerous papers before the Royal Society, and in various scientific journals, and he was the author of several books on radio-activity, published over a period of more than thirty years. In 1932 Lord Rutherford delivered the Nineteenth Thomas Hawksley Lecture to the Institution, on the subject of "Atomic Projectiles and their Applications." His death occurred at Cambridge on 19th October 1937.

LORD RUTHERFORD (Honorary Member). By the death of Lord Rutherford, an Honorary Member of this Institute, science has lost one of its greatest and most inspiring leaders, who also did much to bring science and industry into close contact and co-operation with one another.

A New Zealander, born on August 30, 1871, he came to Cambridge in 1894 as the holder of an 1851 Exhibition scholarship, having already shown his originality and practical skill by experiments on the detection of electric waves. Working under J. J. Thomson, he soon became interested in radio- activity, and pursued the subject actively at McGill University, Montreal, where he was appointed professor of physics in 1898. There, he, with his chemical colleague Soddy, proposed and elaborated the theory of atomic disintegration to account for the strange phenomena which had been studied by many workers, but not explained.

The researches which followed this brilliant discovery, conducted at McGill and at Manchester, after his transfer there in 1907, not only added much to the knowledge of radioactivity, but led to the theory of the structure of the atom which, perfected by Niels Bohr, forms the foundation of modern atomic physics.

In 1919 he was appointed to the Cavendish Professorship of Physics at Cambridge, as the successor of Clerk Maxwell, Rayleigh, and Thomson, and here, as the Director of the greatest school of physical research in the world, he conducted a long series of experiments on the transmutation of elements, while guiding and inspiring a host of students and assistants. His powers were at their height at the time of his death.

Although his own work was in the high realms of experimental physics, Rutherford realized most clearly the importance of scientific progress to industry, and with his great gifts of exposition he would explain to gatherings of industrialists, or, after receiving a peerage in 1931, in the House of Lords, how the advance of industry must depend on the use it makes of the resources of science.

For the last seven years he was chairman of the Advisory Council of the Department of Scientific, and Industrial Research, and his energy and wisdom counted for much in the success of that Department. Many honours came to him, chief among them the Nobel prize in 1908, and the Order of Merit in 1925, and he was President of the Royal Society from 1925 to 1930. He was elected an Honorary Member of the Institute of Metals in 1927 and delivered the 1922 May Lecture on " The Relation of the Elements."

He was essentially an experimenter, and his theoretical conclusions, abstruse as they might seem, were always close to the experimentally observed facts. For wild speculations he had no use, and his expositions were always admirably clear to the non-mathematical reader or hearer. Rutherford's personal qualities were as outstanding as his scientific accomplishments. Full of enthusiasm, and always interested in life, he could communicate his enthusiasm to his pupils, so many of whom have reached distinction as original workers. Few leaders have been so popular with their colleagues, and the scientific world will seem a different place without him. C. H. DESCH.