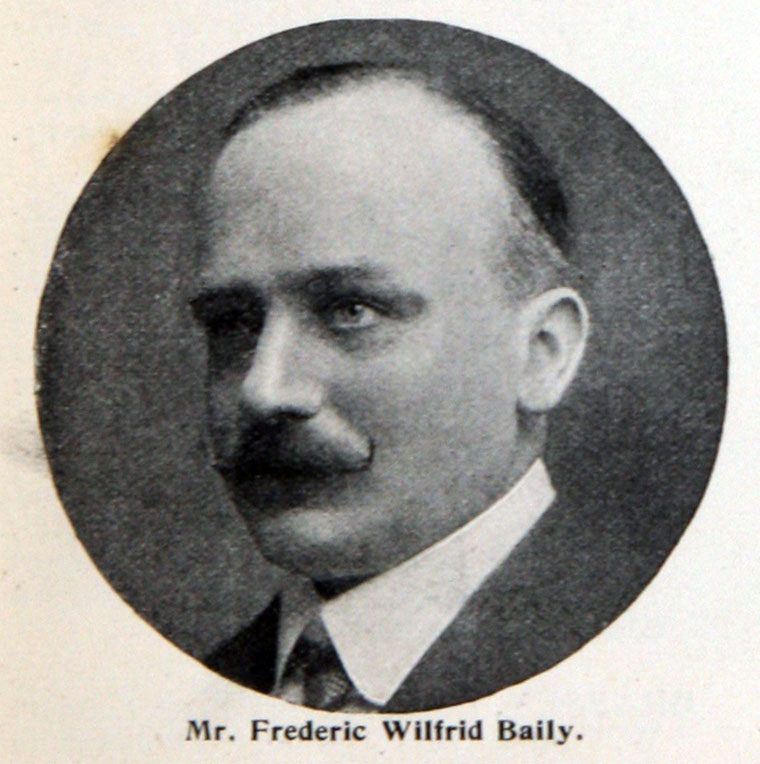 Captain of the Anerley Bicycle Club

1901 Listed boarding in Stoke Newington as a Rug Manufacturer.[3]

1904 'BAILY, Frederic Wilfrid, 35, Earlsthorpe Road, Sydenham, London, S.E.; Crystal Palace, London, S.E. Car: 7-h.p. Panhard, 15-h.p. Napier. Total distance travelled since becoming a motorist: About 18,000 miles. Hobby: Sport; has been hon. superintendent of the Crystal Palace cycle and running tracks since they were built. Is hon. correspondent for the Crystal Palace district of the Motor Union. Is secretary and manager of the Automobile Show held annually at the Crystal Palace under the auspices of the Society of Motor Manufacturers and Traders. Thinks that the Britisher who goes outside his own country for his motor-car or motor bicycle, is not only an unpatriotic citizen, but a very foolish man. Clubs: Crystal Palace, English Motor. A.C.G.B. & I.' [4]

1904 October. Manslaughter charge. 'Bromley (Kent) Petty Sessions yesterday, Frederick Wilfred Baily, secretary and manager of the automobile exhibition at the Crystal Palace, was remanded on a charge of manslaughter. The accused's motor-car collided with a bicycle ridden by William Norton, clerk in the Civil Service, residing at Anerley, and the latter was so seriously injured that he died two hours afterwards. The accused was admitted to bail.'[5]

1906 Compensation order. 'Mrs. Harriet Norton was awarded £1,500 damages, in the Kings Bench Division, against Mr. Frederick Wilfred Baily, secretary of the Crystal Palace Automobile Exhibition, for the loss of her husband, a Civil servant, who was alleged to have been killed by defendant's negligence.'[6]