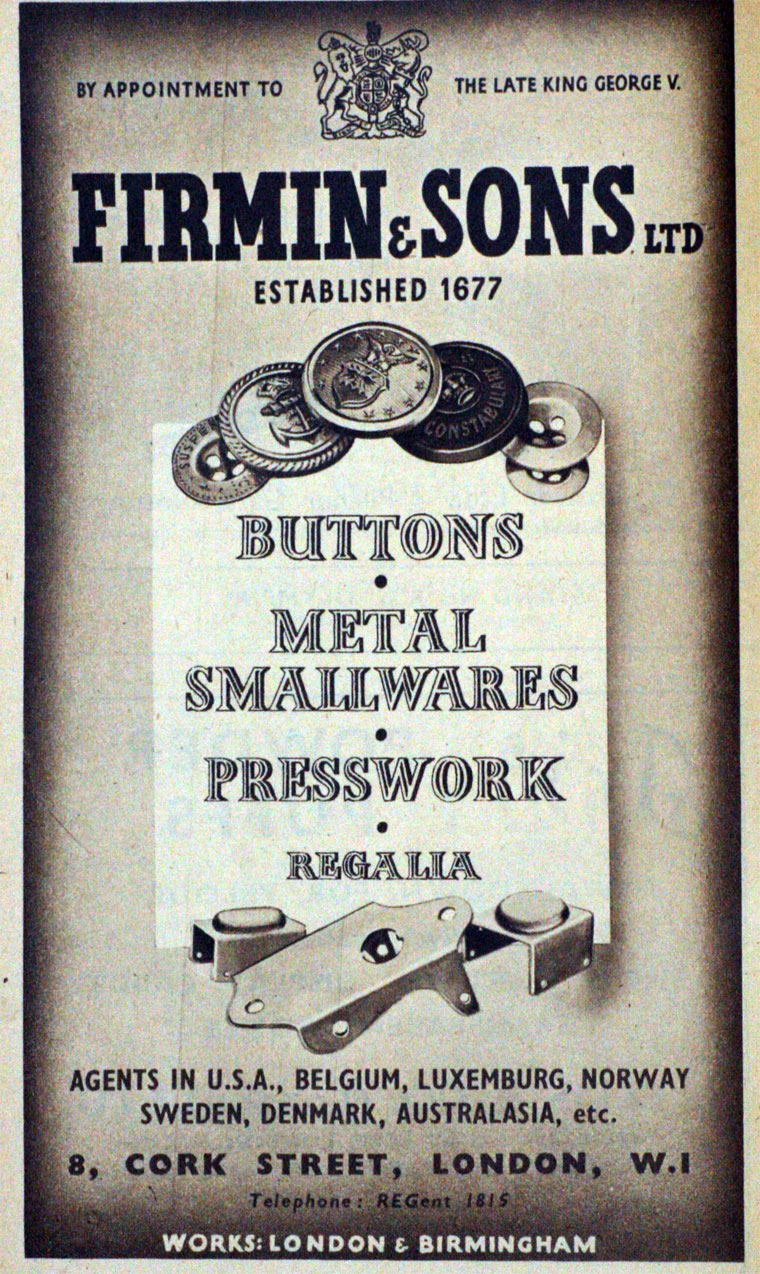 Originally based in the City of London, the Company moved its manufacturing to Birmingham in the late 19th Century.

1677 The first known record of the Company came with the reference to Thomas Firmin (1632-1697), the button maker, in the 'List of Names of Merchants in London' for the year. Firmin operated from Three Kings' Court, Lombard Street, City of London

He was succeeded by Nathaniel Firmin who by 1702 had relocated the business to The Red Lion, "over against Norfolk Street", Strand.

By 1754, the Company's ledgers and order books recorded purchases by King George II and various other members of the British Royal Family.

1760 Following Nathaniel's death in 1754, his son Samuel Firmin moved the firm to The Wheatsheaf, near Somerset House, Strand in 1760.

The firm's operation rapidly expanded to include badges and military regalia as well as buttons.

Thereafter Firmin has held Warrants for every successive British Sovereign to the present day.

1823 The first factory was opened at Clare Court, Drury Lane (also known as 12 White Hart Yard and 20 Stanhope Street) where it operated until 1894

1838 A West End branch was operated at 13 Conduit Street

1855 Exhibited buttons at the 1855 Paris Exhibition

1875 The firm continued to be run by members of the Firmin family until it became a Limited Company. The company was registered on 4 January, to take over the firm of this name as button and military accoutrement manufacturers and general woollen and Manchester warehousemen. [1]

1879 The West End branch was moved to 47 Warwick Street

1882 Another factory was opened at St Paul's Square, Birmingham

1914 Specialities: Buttons, Ornaments, Accoutrements, Gold and Silver Lace and Embroidery for Officers of the Army, Navy, and Auxiliary Forces. About fifty staff in the showrooms and a large number of factory employees.

1916 The Portsmouth branch moved to 6 The Hard

2006 Foundation of Kashket Tactical Group, including Firmins and Snaiths, with factories in Birmingham and London.

Provider of head-to-toe uniforms and operational clothing and equipment for military, emergency and security service, corporate and civilian use for everyone from individuals to armed forces, for everything from a Royal Wedding to bank security.

2020 One of the last working armourers in the United Kingdom making ceremonial armour and helmets, for clients including the Household Cavalry and the Honourable Artillery Company.