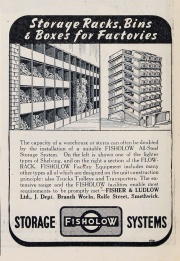 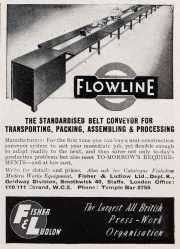 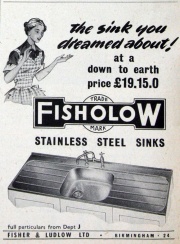 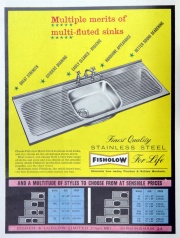 The business of Edward Fisher was carried on at Albion Works, Sherlock St.

c.1882 Fisher was joined, in partnership, by Henry Walton Ludlow.

c.1884 Acquired the business of Mr. Lomas, a clever and resourceful toolmaker, who had a shop in Moor Street - Lomas and Co

The partners began to extend and export their metal wares - kettle necks, lids and spouts, blacksmith forged buckets, heel protectors, and an assortment of stampings and piercings.

Their first government contract was for producing mess tins and camp kettles for the Boer War army.

1897 Dissolution of the Partnership between Henry Walton Ludlow and Charles Showell as Manufacturers of Tinmen's Furniture and other articles at Rea-street Birmingham under the several names of Fisher and Ludlow and Lomas and Co.[2].

1934 Production of car bodies had increased considerably. It was estimated that 3 in 10 of cars on the road in Britain had Fisher and Ludlow bodies. Gridway Manufacturing Co was a subsidiary[5]

1937 Was successful in building car bodies for Standard Motor Co, so much so that it was decided to build a body plant at Canley, with contribution to the cost from Standard[6]

1937 Listed Exhibitor - British Industries Fair. Exhibit comprises an installation of Storage Racks and Bins of Steel construction, surrounded by a platform of Treadway Flooring and Handrails, with examples of Storage Boxes for general works purposes. (Stand No. D.320) [7]

By 1938 the company was making bodies for 8 types of motor car.

1939 The company was tooling up for or making 12 different types of car body. Had introduced the first car bodies painted with synthetic paint. Were developing chassis-less car bodies based on the rights licensed from Motor Patents Ltd. Exploring several other opportunities based on use of fabricated steel sheet[8]

1938 The Castle Bromwich factory was specially constructed for wartime production.

1940 During the Battle of Britain, the factory was damaged by HE and incendiary bombs at 2341 hours on 15 October.

Post-WWII. Fisher and Ludlow purchased the Castle Bromwich factory. They made car bodies for Rover and Jaguar there.

1953 They were taken over by the British Motor Corporation.

A correspondant writes:- 'I worked at Fisher and Ludlow, Birmingham from 1956 to 1965. At that time we were building car bodies for the Wolesley and Riley 1500, the Nash Metropolitan and the Austin Mini. The painted and trimmed bodies were transported to Longbridge and Oxford to add the mechanical parts. There were no Jaguars built there while I worked there.' [11]

1966 Link-up with Parkinson Cowan who were seeking new products and capacity; Fisher-Bendix formed to bring together the manufacturing and marketing operations; Hugh Barker, chairman of Parkinsons, became chairman of Fisher-Bendix too [15].