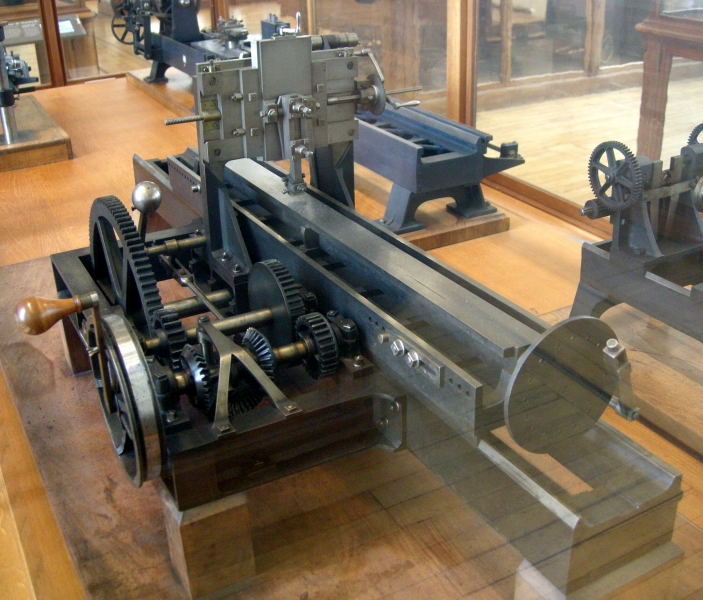 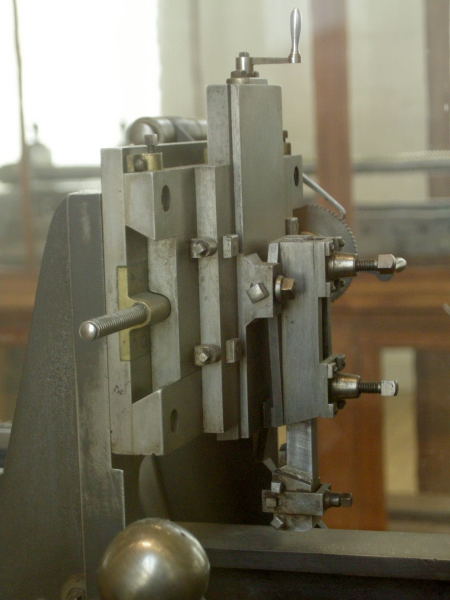 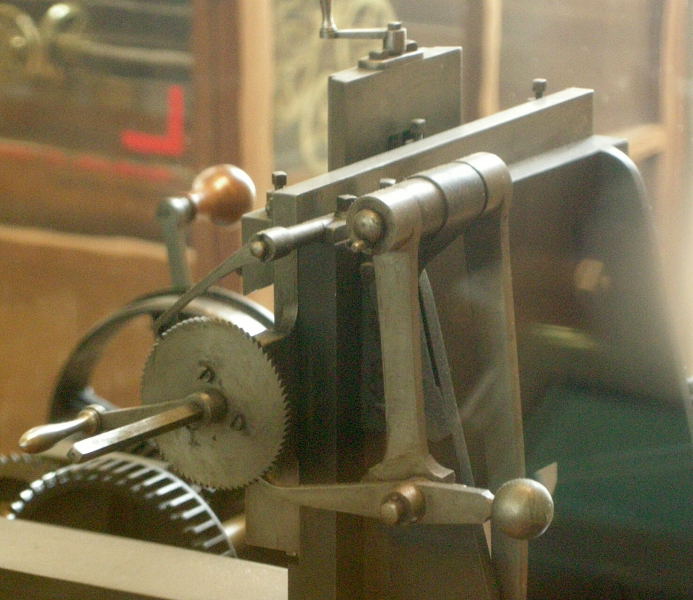 Note: This is a sub-section of Fox of Derby

Fox of Derby was one of the most influential makers of machine tools in the first few decades of the 19th century.

The Paris Musée des Arts et Métiers (Conservatoire des Arts et Métiers) have a number of accurate working scale models of Fox machine tools. These were presumably made to spread knowledge of the design and special features of these machines to manufacturers in France. They include an 1833 model of a Fox metal planing machine. It is illustrated in Steeds' book [1]. It did not have an elevating cross slide, and was intended for machining fairly narrow components.

The workpiece would be clamped to the table which reciprocates beneath the cutting tool. On this machine there is a supplementary table which can be tilted. This will be referred to later.

The machine has two self-acting features: the direction of the table's movement is automatically reversed at each end of the stroke, and the cutting tool is advanced automatically in the transverse direction.

The method of reversing the table's direction, and of altering the stroke to minimise dead time will now be described.

The table is driven by a pinion engaging with a rack beneath the table. These are not visible in the photos, but the largest gear visible in photos 2 & 3 drives the pinion's shaft.

The power input would be supplied by a leather belt driven the shiny pulley (fitted with a hand crank on the model). A pair of bevel (mitre) gears will be seen on the drive pulley's shaft (photos 3-5), engaging with an idler bevel gear beneath. Between the pair of bevel gears is a sliding clutch which is keyed to the shaft and is shifted one way or the other to engage one of the bevel gears. This determines the direction of rotation of the gear train and hence the direction of the table's travel.

The bevel gear's clutch is activated by a bell crank operated by a rod which can be seen in photos 3-6. This in turn is operated by a lever which is hidden from view, but the pegs which strike this lever can be seen at each end of the table can be seen in photo 2, with a series of holes for location. Their position is adjustable to alter the table's stroke. When the lever is struck by one of the two pegs, it is encouraged to tip over quickly by the counterweighted lever with the heavy ball on the end (photo 6).

Photo 8 shows the arrangement for providing automatic cross feed to the cutting tool. An adjustable peg on the table strikes a lever to operate the ratchet wheel. This rotates the leadscrew incrementally.

As configured, this was not a general purpose machine, having a narrow sub-table which could be rotated and fixed at an angle (note the index plate in photo 1). Halfway along the sub-table is a semi-circular collar which presumably provided essential support to reduce deflection (see photo 7). A preserved 1842 Fox planing machine at Naes Ironworks in Norway also has a rotatable sub-table, but it is additionally provided with a small supplementary table. A V-guide located the supplementary table (not provided on the 1833 machine).

1852 A French report[2] referred to some planing machines made by James Fox in 1821 which could plane components for weaving looms, up to 3m 2cm long, 55cm wide, and 31 cm high. It had features seen on later machines, with the cross slide raised by a pair of leadscrews, table traversed by a rack and pinion, driven by normal and crossed belts via fast and loose pulleys and a clutch, the tool being fed either manually or automatically by a ratchet and pawl system. The report refers to an 1834 source which describes this type of machine at length.[3]. It is clear that this 1821 machine was more versatile than the 1833 model featured here.

The 1852 report states that large Fox planing machines appeared in workshops in Berlin and Belgium and in the Paris works of Pihet et Cie in 1831 or 1832.