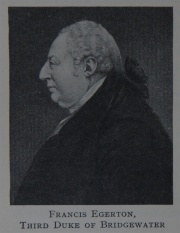 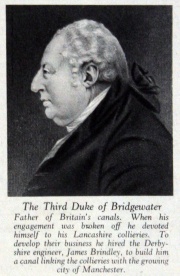 1748 Francis Egerton succeeded to the Dukedom at the age of twelve on the death of his brother, the 2nd Duke. As a child he was sickly and of such unpromising intellectual capacity that at one time the idea of cutting the entail was seriously entertained.

Shortly after attaining his majority he became engaged to the society beauty the Dowager Duchess of Hamilton, but her refusal to give up the acquaintance of her sister, Lady Coventry, led to the breaking off of the match.

Thereupon the Duke broke up his London establishment, and retiring to his estate at Worsley, devoted himself to the making of canals.

The navigable canal from Worsley to Manchester which he projected for the transport of the coal obtained on his estates is usually cited as the first modern British canal (as opposed to a river navigation), although the Sankey Canal is a rival to this claim (projected as a "navigation", but built as a true canal).

The construction of Bridgewater's canal, with its famous aqueduct across the Irwell, was carried out by James Brindley, the celebrated engineer.

The completion of this first canal led the Duke to undertake a still more ambitious work. In 1762 he obtained parliamentary powers to provide an improved waterway between Liverpool and Manchester by means of a canal. The difficulties encountered in the execution of this canal were still more formidable than those of the Worsley Canal, involving, as they did, the carrying of the canal over Sale Moor Moss. But the genius of Brindley, his engineer, proved superior to all obstacles, and though at one period of the undertaking the financial resources of the Duke were almost exhausted, the work was carried to a triumphant conclusion.

Both these canals were completed when Bridgewater was only thirty-six years of age, and the remainder of his life was spent in extending them and in improving his estates; and during the latter years of his life he derived a princely income from the success of his enterprise. Though a steady supporter of Pitt's administration, he never took any prominent part in politics.

He accumulated great wealth through his canal and coal interests, and his annual income was said to have exceeded £80,000. The family owned three estates at the time: Belton House, a small Sussex estate, and the old house and 6,000 acres at his house of Ashridge.

With the Bridgewater fortune now exceeding £2,000,000, and the Duke being the richest noble in England, he set about rebuilding Ashridge. He began to pull the old buildings down, but he died before his plans could be completed, leaving his heir with nothing but a pile of rubble.

He was the leading member of the syndicate which purchased and partly resold the famous Orleans Collection of old master paintings in 1798 (including Diana and Actaeon and Diana and Callisto), and most of his purchases are still held by the Egerton family.

1803 March 8th. Died unmarried and the Ducal title became extinct (although the Earldom of Bridgewater passed to a cousin, Lieutenant-General John Egerton, who became 7th Earl).

By his will he devised his canals and estates on trust, under which his nephew, the 2nd Marquess of Stafford (afterwards 1st Duke of Sutherland), became the first beneficiary, and next his son Lord Francis Leveson-Gower (afterwards 1st Earl of Ellesmere) and his issue. In order that the trust should last as long as possible, an extraordinary use was made of the legal rule that property may be settled for the duration of lives in being and twenty-one years after. The legatees were a great number of persons connected with the Duke and their living issue, plus all peers who had taken their seats in the House of Lords on or before the Duke's decease. The last of the peers died in 1857, but one of the commoners survived till the 19th of October 1883, so the trust did not expire until 19 October 1903, when the whole property passed under the undivided control of Francis Egerton, 3rd Earl of Ellesmere. (The canals, however, had been transferred to the Bridgewater Navigation Co in 1872, by whom they were sold in 1887 to the Manchester Ship Canal Co.)