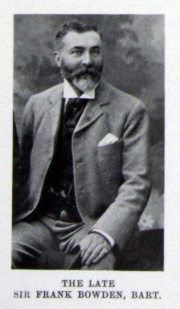 1872 When Bowden was 24 years old he made a fortune in the stock market in Hong Kong.

By 1878 Bowden's health began to break down and he decided to satisfy his interest in travel. He moved to San Francisco.

1879 He met and married Amelia Frances (d. 1937), daughter of Colonel Alexander Houston, one of the pioneers of California State

In 1885 he visited Harrogate and sought medical advice regarding his ill health and was advised to take up cycling.

c.1888 Recognising the potential that cycling had to offer, Bowden visited the makers of his tricycle, Woodhead, Angois and Ellis of Nottingham, and persuaded the company to accept him as financial backer.

In January 1889 the Raleigh Cycle Co was incorporated

By 1896 Raleigh was the largest bicycle manufacturer in the world.

1896 Listed as a Director of Fairbanks Rim Manufacturing Co and as MD of Raleigh. [3][4]

1901 Living at 11 Mapperley Road, Nottingham (age 53), Managing Director and Employer in Cycles. With wife Amelia (age 44 and born in San Francisco) and two sons and four daughters plus two servants. Two eldest children age 19 and 20 were born in San Francisco and the others in London. [5]

In January 1903 he founded the Three-Speed Gear Syndicate which became the Sturmey Archer Gear Co in June 1908.

1908 After another financial crisis at the Raleigh Company, Bowden secured its debts on his personal fortune and took complete ownership.

In recognition of public services to his country during WWI, Frank Bowden was created a Baronet.

1921 He died of heart failure at his home, Bestwood Lodge, Bestwood Park, Arnold, Nottinghamshire, on 25 April 1921.

1921 Obituary. Sir Frank Bowden Bt. died from heart disease at Nottingham last night. He only returned from a continental health visit yesterday. Sir Frank was the son of the late William Bowden, manufacturer, of Bristol, and was born in 1848. He was the founder and sole owner, with his son, of the Raleigh Cycle Company Limited, which was largely engaged from the beginning of the war in the manufacture of munitions of war. He was also founder, chairman, managing director and principal owner of Sturmey-Archer Gears Limited, and a justice of the peace for Nottingham. He received his baronetcy in June 1915 and is succeeded in it by his only surviving son Harold who was born in 1880 and has a son and daughter. Lady Bowden, who Sir Frank was married to in 1879, is daughter of Colonel Alexander Houston, of San Francisco. [6]

His only son, Harold Bowden, succeeded to the baronetcy and assumed control of the Raleigh Company and Sturmey Archer Gear Co.