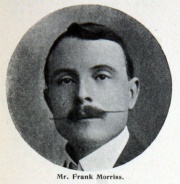 Frank Edward Morriss (1865-1940) was a pioneer of British Steam Cars and played an active role in the London to Brighton run.

1865 Q2. Born at Redditch the son of Edward J. Morriss, a Sail Needle Maker and his wife Elizabeth

1902 January. Takes legal action against the Edinburgh Auto-Car Co for supplying a Daimler 20th April 1901 that did not match its description [6]

1902-1905 Produced automobiles heavily based on Daimler.

1903 'MORRISS, FRANK. It is almost impossible to refer to automobilism in the Eastern Counties without the name of Mr. Frank Morriss being brought into prominence, for, without doubt, he is the pioneer of the industry in that district, and the one who has done so much to popularise the autocar throughout the Eastern Counties. He was born at Redditch, Worcestershire, in 1865, and commenced his business life in the service of the General Post Office, but, as his natural bent of mind was always towards things mechanical, this sphere of life did not suit him, consequently he resigned his position in order to devote himself to things. more congenial to himself. As far back as 1892 or 1893 Mr. Morriss was busily engaged in making a model of a steam motor or engine, which he proposed placing into a carriage, but, in common with all inventors, he met with so many difficulties at that time in obtaining suitable material that progress was exceedingly slow, and the engine and vehicle was never really finished before the passing of the Light Locomotives Act. Mr. Morriss now regrets that he did not have this most interesting vehicle photographed in its unfinished state at the passing of the Act, so that he might have had a permanent record, as all his attention has since been devoted to the petrol type of autocar. With the passing of this Act, Mr. Frank Morriss was one of the few Englishmen to at once grasp the huge possibilities of the successful future for the autocar industry in England, and he at once entered into it with such determined energy that he is now one of the best known men in autocar circles, and looked upon as one of the keenest and most successful pioneers of this most rapidly rising industry. His success has been in proportion to his immense energy, and his works at King's Lynn are one of the best equipped and most up-to-date in the kingdom, and contain something like sixty of the very finest automatic and semi-automatic American machine tools in the country, giving employment for nearly 100 hands, whilst, with further building operations now in progress, his staff will shortly be increased to beyond this number. The many sound and practical productions, of the "Sandringham" motor works are, however, the outcome of this success, such as the patent gear sleeve now so universally well-known and used on Daimler and Panhard gears, whilst his latest speciality is in supplying clients with cylinders and pistons for converting their old 6-horse motors into 10-horse, or the old 12-horse into 20-horse, as the case may be. Mr. Morriss (who has had charge of the royal autocars from the date of his Majesty's conversion to the royal sport) has just recently received the royal warrant appointing him motor engineer to his Majesty the King, which has been granted to him in recognition of the extremely close attention he has given to his Majesty's cars; an attention which has always resulted in their running most successfully.'[8]

1904 'MORRISS, Frank, Motor-Engineer to H.M. the King, Sandringham Motor Works, King's Lynn. Cars: Sandringham cars, of which he is the manufacturer. Total distance travelled since becoming a motorist: Equal to three times round the world. Has had the charge of the Royal motor-cars since His Majesty's conversion to motoring, and was appointed motor engineer to the King in the early part of 1903'. [9]

1911 Formerly of King's Lynn and now with W. Turner Smith of Stoewer Brothers [12]

1920 Announcement of engagement of his daughter Gladys. Address given as 18 Alexandra Villas, Finsbury Park [14]

1925 Executor of will. '...estate of Laura Eliza Modern, of Rose Cottage, Bouts Farm, Inkberrow, in the county of Worcester, Widow, deceased (who died on the 29th March, 1925, and whose will was proved in the Principal Registry of the Probate Division of His Majesty's High Court of Justice on the 29th April, 1925, by Frank Edward Morriss and Howard Lyon Smith, the executors...' [16]