Grace's Guide is the leading source of historical information on industry and manufacturing in Britain. This web publication contains 142,891 pages of information and 228,796 images on early companies, their products and the people who designed and built them. 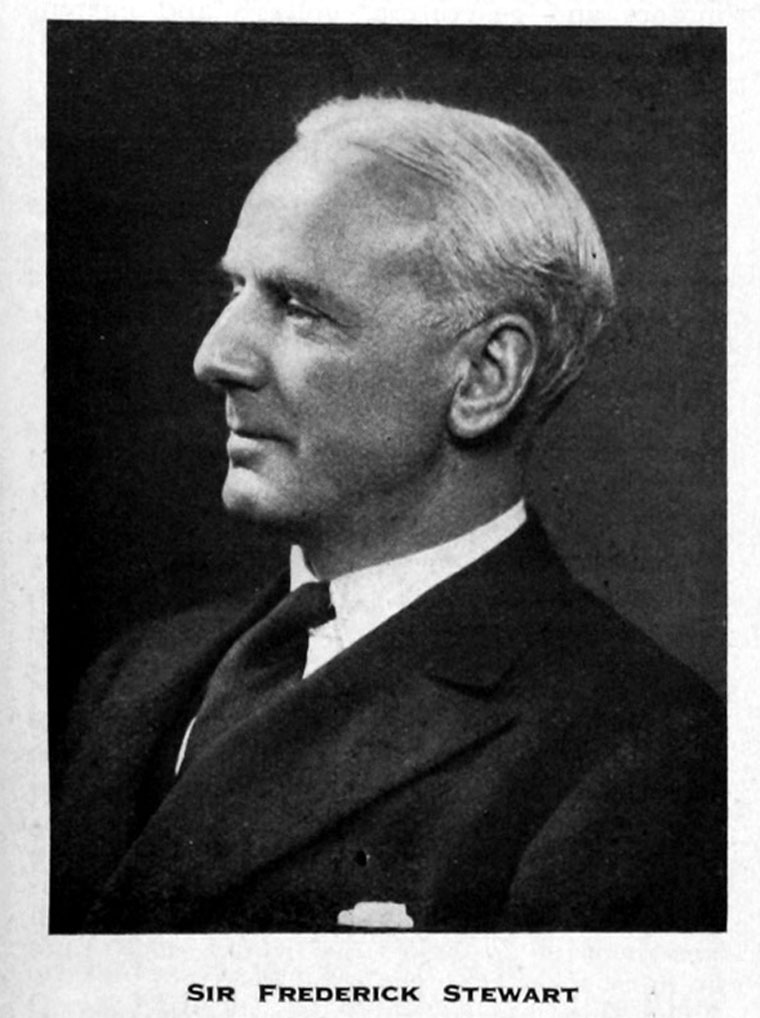 He became chairman of Thermotank and Thermotank Engineering Co, of Glasgow, London, Liverpool and Newcastle.

"SCOTLAND has lost one of her prominent industrialists by the death of Sir Frederick Charles Stewart, which occurred at 8, Lancaster Crescent, Glasgow, on March 10th. Although he was closely concerned with many engineering and other companies. Sir Frederick will probably be remembered best as the chairman of Thermotank, Ltd., the firm which he founded in collaboration with his two brothers in 1908.

Frederick Charles Stewart, who was born in 1879, was the son of the late Mr. William Stewart, of Blair Atholl. He was educated at the High School, Glasgow, and as a young man was for a time in business with his father as a coal merchant in Dalmuir. But he was soon attracted to the engineering industry and with his brothers, Alexander and Maxwell Stewart, started the business to which he devoted the greater part of his energy and skill throughout the remainder of his life.

From the first Thermotank Company. there has developed the present organisation, with subsidiaries in South Africa and Canada, which is well known for its production of ventilating equipment for ships of all classes, railway rolling stock and aircraft. Sir Frederick's engineering interests, however, were not wholly confined to the company which he founded.

He was chairman of the North British Locomotive Company, Ltd., and of Kelvin Bottomley and Baird, Ltd., deputy chairman of Brown Brothers and Co., Ltd., Edinburgh, and a director of William Baird and Co., Ltd.

In recognition of his public and industrial service, the honour of knighthood was conferred upon him in 1944, in which year he also became a Deputy Lieutenant of Dumbartonshire. In the first world war Sir Frederick served with the 9th Argyll and Sutherland Highlanders, from which he retired with the rank of colonel in 1921.

But even with all these commercial and public responsibilities, Sir Frederick found time to take an interest in the work of many other organisations and institutions, and was also a generous benefactor to a number of worthy causes. His gifts included a sum of £10,000 in 1945 to the Commonwealth Fund of the Trades House of Glasgow, and a similar donation to the University of Glasgow, for extending its engineering department. For many years he showed an especial

interest in matters associated with engineering education and was certainly amongst those who encouraged its development along the broadest possible lines. During two terms as President of the Institution of Engineers and Shipbuilders in Scotland in the most difficult years of the recent war Sir Frederick took the opportunity to advocate the great value of what he aptly called the logical and objective training of engineers.

His presidential address to that Institution in 1942 dealt in a very practical manner not only with the work of the engineering industry during the war but also with the tasks which he foresaw that it would be required to perform in the post-war years. Sir Frederick was elected to honorary membership of the Institution three years ago. He was also a, vice-president of the Institute of Industrial Administration. Furthermore, as an acknowledgement of his services to engineering education, the University of Glasgow conferred upon him the honorary degree of LL.D.

It has been said that Sir Frederick found little time for recreation, but he was, nevertheless, keenly interested in music and the arts, and the City of Glasgow has benefited considerably by his generous support. His ability and generosity have made a notable contribution to the industrial, social and cultural life of the century.