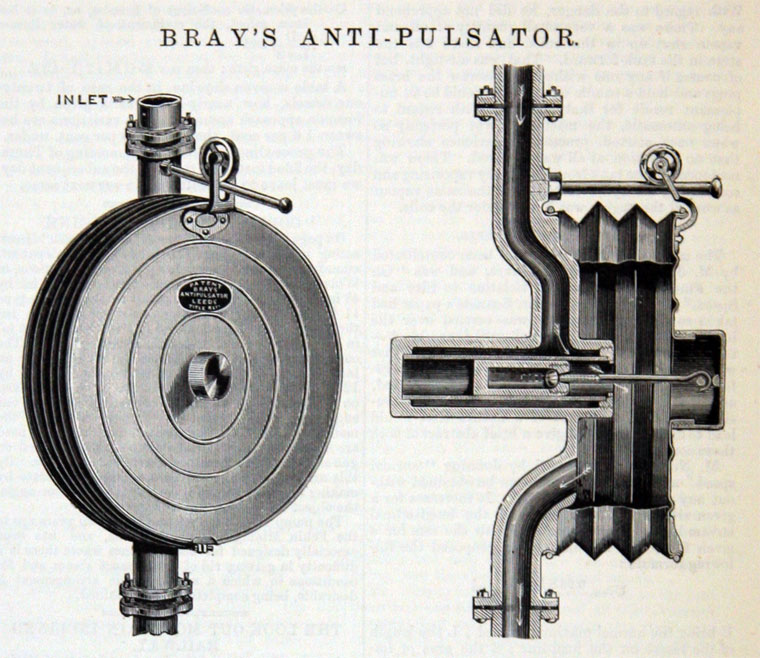 It is an appliance which enables a gas engine to draw its charge without producing a fluctuation of pressure in the mains, and by its use both the engine and the ignition jet, and the lights in the building may be supplied from the same meter.

The gas descends the vertical pipe, flows into the bellows, where it stands at about atmospheric pressure. It is then drawn forward to the engine through the lower pipe. The inlet to the bellows is regulated by a valve moving in a cylindrical valve case. There is a long slit in the top of the valve case, and and when the valve is at the left hand end of its valve stroke, the slit is entirely open. As the valve is drawn forward by the expansion of the bellows, this slit is gradually closed. This reduces the rate of inlet of the gas, and when the bellows are fully inflated, the slit is closed. The rod connecting the bellows to the valve does not take a rigid hold, but has a certain amount of 'play', in oreder that the valve may not respond to every movement of the bellows. Instead it takes up a position that gives a flow of gas equal to the average consumption of the engine.[1]