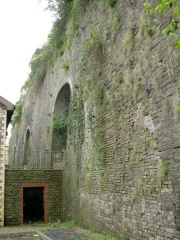 This was one of five iron-producing works in the Cynon Valley, the others being Hirwaun, Aberdare, Abernant, and Aberaman.

According to the R.C.T. History society, the first mine sunk in Cwmbach was in 1837 by Matthew Wayne of the Gadlys Ironworks and his son Thomas Wayne, at Abernant-y-groes it was then known as Cwmbach pit. There is a blue heritage plaque on the site at Pit Place, Cwmbach

1827 With money from his success at Nant-y-glo ironworks, Matthew Wayne founded the Gadlys Ironworks, Aberdare, in conjunction with George Rowland Morgan and Edward Morgan Williams.

The works had only one blast furnace for some time, so were quite small compared with those at Abernant, Llwydcoed, etc.

1835 The works were put up for sale in London

c.1836 Wayne's sons joined him in the management of the business

The Neath Abbey Co supplied a three large engines between 1845 and 1850.

Associated coal-pits were at Pwll Newydd and the Graig Colliery

By 1850, there were four blast furnaces at Gadlys; established the Gadlys Tin Works.

By 1868 two more blast furnaces had been added.

A wagon repair shop built between 1876 and 1897 replaced the casting house. This building now houses the Cynon Valley Museum & Gallery

Today the site is a Scheduled Ancient Monument. The imposing bulk of the stone-faced blast furnaces remains, as does the 1857 blowing engine house.

See here for a detailed archaeological asssessment, history, and context, from which some of the above information has been taken.[1]