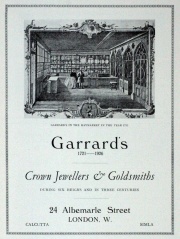 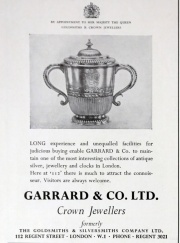 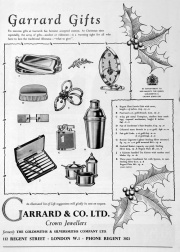 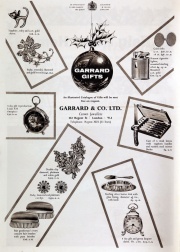 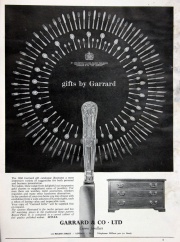 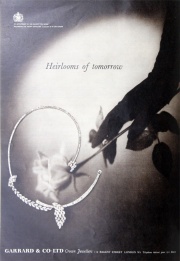 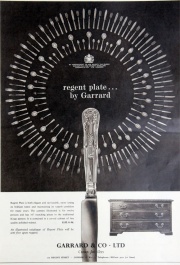 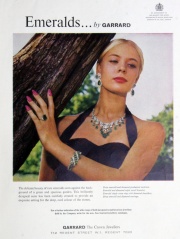 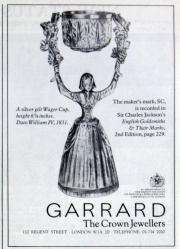 As Crown Jewellers, their duties included the care and maintenance of the British Crown Jewels and the Royal Crown. They developed an international reputation for craftsmanship in the design and manufacture of jewellery, gold and silverware.

Company taken over by:

1843 Queen Victoria bestowed the honour of Crown Jeweller on the company.

1852 The celebrated diamond, the "Koh-i-noor" was recut on the premises, the first facet being cut by the Duke of Wellington.

1914 Crown jewellers, goldsmiths and silversmiths. Appointed Crown Jewellers to Queen Victoria, King Edward VII, King George V, the appointment entailing supervision of the regalia. Supplied Queen Mary's crown which she wore at Westminster Abbey; also the Imperial crown worn by King George V at the Delhi Durbar. Specialities: fine diamond and coloured gem jewellery and pearls, gold and silver plate and artistic productions in both gold and silver, the Insignia of all the principal Orders of Knighthood. [1]

1914 Garrard and Co were asked to manufacture precision range finders for the British Artillery because they had both the craftsmen and special machinery needed.

1915 Formed the Garrard Engineering and Manufacturing Company Ltd with Major S. H. Garrard as Chairman, to run a factory set up in the premises of the White Heather Laundry in Willesden, London, to create precision rangefinders, as they had the specialist equipment necessary.

1952 the firm was amalgamated with Goldsmiths and Silversmiths Co Ltd.

1953 "Formerly the Goldsmiths and Silversmiths Co"[2]

1998 Garrard merged with the jewellery firm Asprey and Co to become Asprey and Garrard, moving from 112 Regent Street to premises on New Bond Street.

Asprey & Garrard was bought by Prince Jefri Bolkiah, a younger brother of the Sultan of Brunei, in 1995, and later acquired by private investors Lawrence Stroll and Silas Chou in 2000.

2002 The company demerged, with Garrards returning to the Albemarle Street site it first occupied in 1911.

2006 Garrards was acquired by the US private equity firm Yucaipa Cos., ending its partnership with Asprey.

2007 On 15 July 2007 an announcement was made in the Court Circular that Garrard & Co's services as Crown Jeweller were no longer required, with the reason cited being that it was simply 'time for a change'. G. Collins and Sons were appointed the new Crown Jewellers.