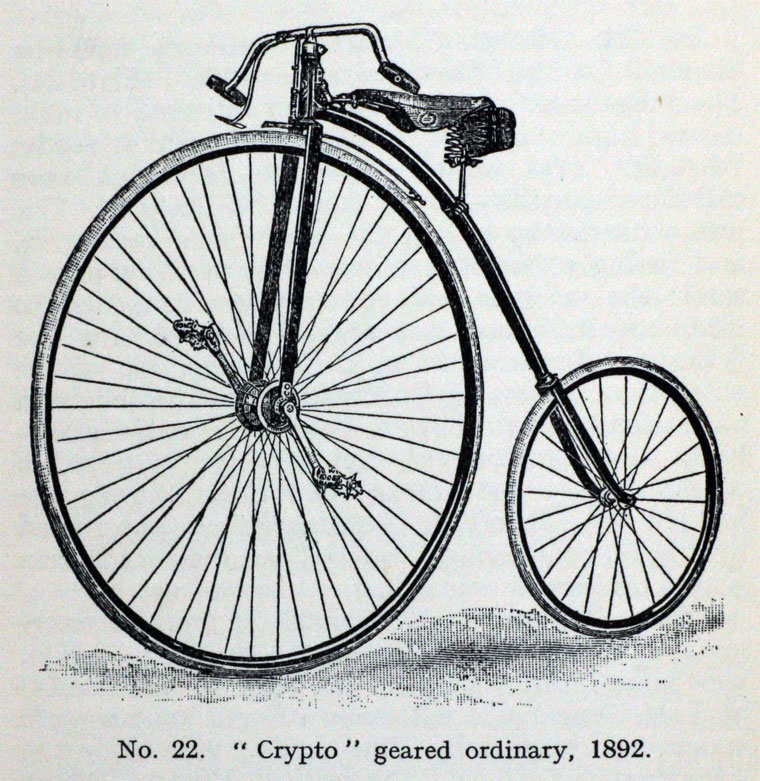 Instead of the cranks driving the front wheel direct — as in the ungeared 'ordinary,' the spindle carried a pinion: on the inner circumference of the hub was a ring of teeth; between these teeth and the aforementioned pinion was a set of three small pinions revolving on studs affixed to the hub-flange. By means of this mechanism (which was similar to that used in the high gear of a modern three-speed hub) the 49 inch driving wheel was geared up to about 62 inches.

This gear was a development of the Crypto Dynamic two-speed gear, invented by William Thomas Shaw and William Sydenham in 1882, patent No. 3230. With mechanism locked solid, the road wheel was “geared” up or down according to the number of teeth on the driving and driven sprockets: with the pinion in operation a lower gear was brought into action.

This identical machine was a favourite mount of the late Mr. J. J. Henry Sturmey, of Coventry, who for many years acted as Editor of The Cyclist and later of The Autocar. On his death (8th January, 1930) it was presented to the Bartleet Collection by his sister. Unfortunately the Boothroyd single-tube tyres, with which it was fitted, were detached and stolen during transit between Coventry and London. Weight, without tyres, 35.25 lbs. [1]