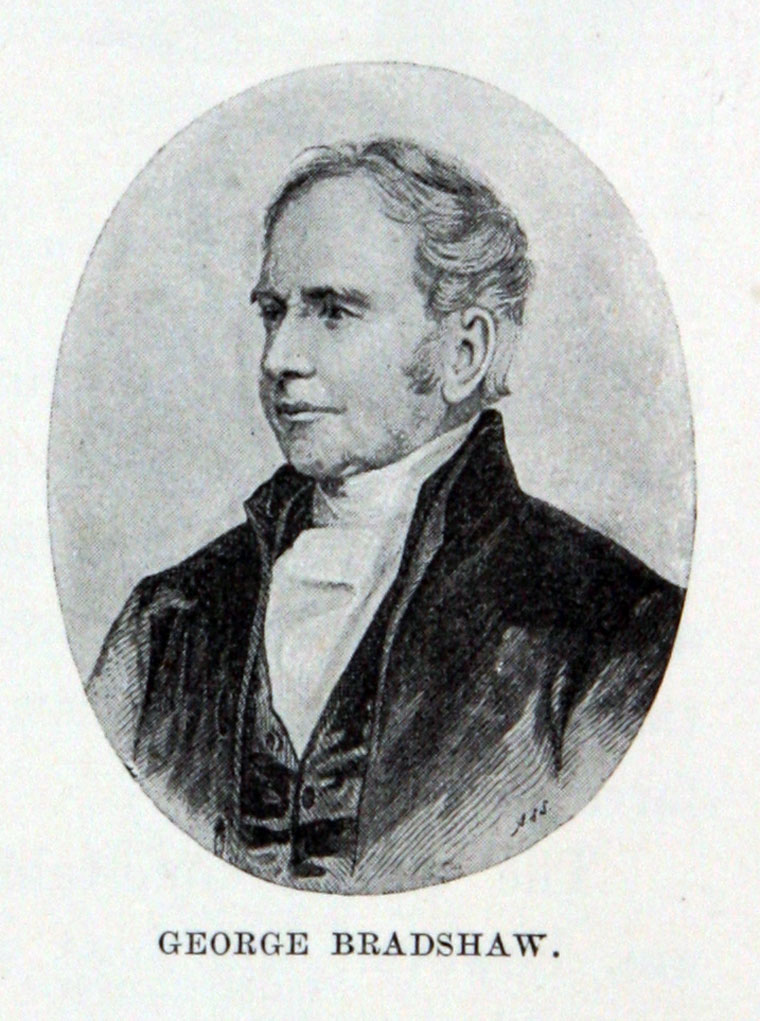 1842 George Bradshaw of Manchester, became a member of the Institution of Civil Engineers.[1]

George Bradshaw was born at Pendleton, near Manchester, in the year 1800; his parents, who were industrious honourable persons, taxed their limited means to the utmost to give a good education to their only child; he was therefore placed under the care of Mr. Coward, a Swedenborgian minister of some eminence at that period; from thence he was removed to a school kept by Mr. Scott, at Overton, Lancashire, but he does not appear to have had much aptitude for scholastic exercises, or what is very probable, his character was not understood by his teachers, so he left school at about fourteen years of age without having made the progress that might have been expected from the advantages he enjoyed.

This was a source of deep regret in after life, and he laboured hard to supply the deficiencies in the branches of knowledge essential for his ordinary pursuits.

On leaving school he was apprenticed to Mr. Beale, an engraver of some eminence, who had acquired reputation by the execution of the plates of Duncan Smith‘s four books of penmanship, and other works of the period.

In the year 1820 he accompanied his parents to Belfast, and there established himself as an engraver and printer; but after about a year’s trial, not finding adequate occupation, he returned and settled at Manchester.

His attention had for some time been directed to the engraving of maps, and in 1827-28, he determined to devote himself more especially to that branch of art. The first map projected, engraved and published by him, was one of Lancashire, his native county. This was followed by his map of the canals of Lancashire, Yorkshire, Cheshire, Derbyshire, and Staffordshire; on which was given the lengths, and levels of the canals, and navigable rivers, with the width and depth of the locks, their height, above low-water mark, at Liverpool, combined with much varied and extremely useful information, relating to the navigation of the adjacent coast. This map eventually became one of a set of three of a similar kind, known as 'Bradshaw’s maps of Inland Navigation, in three parts;' - embracing nearly the whole of England.

The first part was dedicated to our first President, Telford, and its merit being recognised by professional men, the author soon became advantageously known. At that period he was also employed on surveys for some Members of this Institution, but he never became extensively engaged in that branch.

Immediately after this, Mr. Bradshaw became associated with Messrs. Blacklock, his surviving partners, the result of which connexion has been very materially to extend the Railway publications and eventually to induce the production of 'The Railway Guide,' a work which has tended most to place Mr. Bradshaw’s name prominently before the public. This work, from a very insignificant beginning, has by intense labour and unceasing attention, under circumstances of no ordinary difficulty, attained an extraordinary circulation.

It has not only induced the publication, by the same firm, of a similar guide for the continental railways, but has been the parent of numerous works of a similar character.

Previous to the publication of the original guide, the various railway companies were accustomed to make the necessary changes in the starting of the trains, at very irregular periods, regardless of the inconvenience to travellers. Mr. Bradshaw devoted himself sedulously to inducing the regulation of the time tables, only at the first of each month, and the general benefit arising from such an arrangement has been so far recognised, that only very pressing circumstances now induce any deviation from that rule.

Numerous smaller works engaged the attention of the firm, until the railway system became important and a general map of the lines was called for, and in 1838 Bradshaw’s Railway Map was produced, with sections of the principal lines; a second edition was soon required, and the rapidly succeeding extensions induced numerous corrections and emendations, until it assumed the present form of the large map of Great Britain, and part of Ireland, exhibiting the various lines of railway, completed, in progress, or only projected, with the telegraphic communications, the rivers threading the surface of the country, -distinguishing those that are navigable, - the various canals, marking their height above the sea and the principal pools and points of communication, - showing also the site and relative altitude of the hills and mountains, and indicating the produce of the mineral districts;- it points out also the sands, shoals, and rocks on the coast, with soundings, and the positions of numerous buoys, beacons, and lighthouses; in fact it would appear that nothing had been omitted which could render it generally useful, and though still capable of extension it must even in its present state 'be recognised as a marvel of ingenuity, and the fruit of a really admirable enterprise. It constitutes a visible epitome of the mighty conquests, made by the Anglo-Saxon race in their memorable march,- a march not of decades, but of centuries, along the broad and holy track of civilisation.'

The habit of collecting information, thus engendered, naturally induced the compilation of several other useful works of reference, among which may be mentioned the 'Shareholder’s Manual' published annually, and containing the history and position of each railway company, its statistics, the powers under the various Acts of Parliament, and lists of the officials, with much useful information.

Amidst the unceasing occupations of his busy life, he could always find time and opportunity for acts of benevolence, and was ever ready to devote his means and his energies to the furtherance of any plan for the benefit of his fellow-men. Being a member of the Society of Friends, he was a conscientious advocate of the peace movement, and an active coadjutor of Messrs. Pease, Sturge, Scoble, Elihu Burritt and others, in holding 'peace conferences,' in the attempts to establish an ocean penny postage, and other philanthropic labours, and after the failure of his health, to such an extent as to preclude his taking any very active part in business concerns, for the last six years of his life, his time was chiefly devoted to the establishment and conduct of schools for the poorer classes, and to other works of benevolence congenial to his disposition.

'Anything that had for its object the good of mankind, found in him a ready advocacy and help, and this in no narrow, or sectarian spirit; for although his charity was so unostentatious as scarcely to be known beyond the circles in which it was exercised, his benevolence was so universal as to know no limit but his means and opportunity.'

In the month of August 1853, Mr. Bradshaw went to Norway on a tour, combining business and recreation, and on the 6th of September, whilst on a visit to a friend, in the neighbourhood of Christiania, he was seized by Asiatic cholera and in a a few hours was a corpse. Thus perished in his fifty-third year George Bradshaw, of whom his friend Elihu Burritt writes, 'How few, comparatively, will ever know and appreciate his worth! How few, even in the town in which he lived, will ever know the value of his busy life of quiet benevolence! His meek walks of charity are marked by no monument bearing his name; they may have left few foot-prints visible to human eye; but they dropped the dew of Christian love among the dwellings of poverty and ignorance ; and he did not even let his left hand know what his right hand did. He was ever planning secretly enterprises of good-will to them, which should ameliorate their condition, and bring to them light and comfort. But it was in connexion with t,he various operations embraced in the peace movement that we were brought int,o intimate acquaintance and connexion with him. In this great. field of philanthropy he never wearied, but waxed warmer and brighter in faith and activity to the last. Here, too: he laboured with the characteristic modesty of his gentle spirit, and he was always ready to take upon himself the most burdensome, or mechanical part of the work. Far from home and kin, he yielded up his spirit into the hands of his Redeemer, whom he had followed and served with such single-hearted devotion. That honest and generous heart, that beat with such earnest sympathies for every enterprise and effort of philanthropy, has been stilled for ever on earth. His lowly grave lies in a foreign land seldom visited by his countrymen. Few, if any, of his friends will ever see where they laid him down to rest. We trust some humble stone may mark the spot, and that now and anon some one who knew his worth may commune with the mysteries of immortality over that precious dust.'

Mr. Bradshaw joined this Institution as an Associate, in February 1842, and although not a very frequent attendant at the meetings maintained at intervals an active correspondence with the Secretary, was ever ready to impart useful information, and to contribute to the general welfare of the Society. His loss will be deeply felt and lamented, not only by his widow and family, but by a large and admiring circle of friends, to whom he was endeared by his kindly bearing and most benevolent disposition.