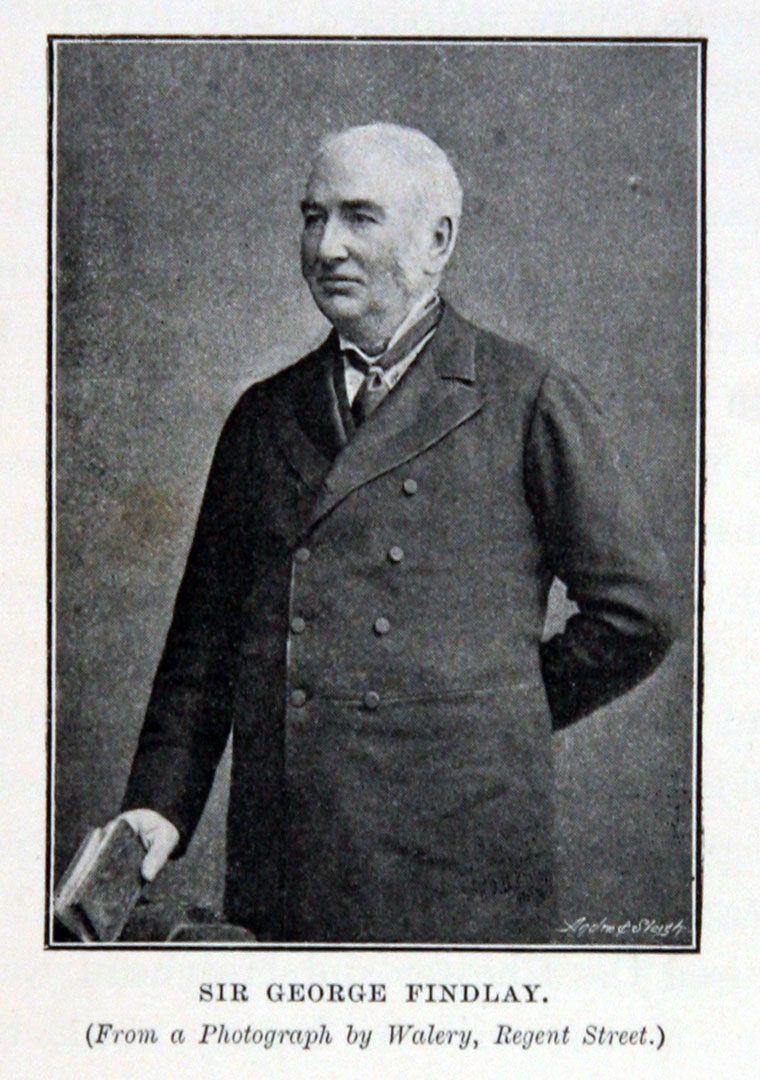 "...Sir George Findlay was born of Scottish parents in 1829. He was thus only 63, but, like most of the great leaders of railway enterprise in this country, he was aged before his time by the long and irregular hours, and the constant anxiety inseparable from the control of thousands of servants, and responsibility for the lives of millions of passengers.

He entered the railway service in the year 1845, a lad of 16, from the Grammar School at Halifax, as one of the staff of the great "Tom" Brassey, then contractor for the construction of the Trent Valley Railway from Rugby to Stafford. The following year the Trent Valley became an integral portion of the newly-established London and North-Western Railway, but the future general manager was not absorbed by the company till a. much later date.

In the interval he was engaged on other lines in Wales, finally becoming manager of the Shrewsbury.....

By the death, on Sunday morning last, of Sir George Findlay, there has passed away the doyen of railway managers. For years he had not enjoyed robust health. Indeed, when Sir Richard Moon retired from the chairmanship of the London and North Western Co, the directors desired him to assume that position; but he resolved to continue in the general management of the railway which has so prospered under his direction, he himself remarking that he had some years’ good work still left in him. His natural enemy was the gout, but recently he fell a victim to a serious internal disease. He underwent an operation two or three weeks ago, and failing to rally, died, as we have stated, on the 26th inst., at his residence at Edgware. He was but 63 years of age, having been born of Scotch parentage in 1829 ; but he had almost reached his fiftieth year of railway service, for in 1845, when'a lad'of 16, fresh from the grammar-school at Halifax, he 'started that career which has been such a brilliant success. He was particularly fortunate in beginning his railway life under the auspices of the great “Tom” Brassey, then engaged on the Trent Valley Railway from Rugby to Stafford, and which in 1846 became part of the newly established London and North Western Railway. But before the transfer the subject of opr memoir had gone to the Welsh railways, subsequently .becoming manager of the Shrewsbury and Hereford line, then leased by Mr. Brassey, but which, in'1862, also became part of the fast-extending London and North-Wéstern system. This time Mr. Findlay, as he himself put it afterwards, “ was taken over with the rest of the rolling stock.” He required but the opportunity to display his powers of organisation and óf grasping detail, and Euston provided it, so that, with application and perseverance, he rapidly advanced, becoming chief goods manager, and in 1874 succeeded Mr. Gawkwell, now deputy-chairman of the company, in the office which was first known as that of traffic manager; but has since been called by a title more in keeping with the actual duties—general manager.

It might be possible, although scarcely necessary, to indicate some idea of the great duties devolving upon Mr. Findlay, who only last year received the honour of knighthood, a tardy recognition of the great ability with which those duties were performed—to indicate the responsibility of administrating a railway extending from London to Cambridge, to Carmarthen, and to Carlisle, with a capital of 110 millions sterling, involving an annual expenditure for wages alone of about 3 millions sterling, the number of employés being 61,000. One feature of the management, as brought out in his book on the subject,* was his close observance óf the maxim, “ One thing at a time,” and his complete organisation of assistants to whom he could relegate detail. But the secret of success is so fully entered upon in the book we have referred to, that it is only needful here to refer to it such as wish to learn the lesson of Sir George Findlay’s active life, in which he found time not only for his immediate duties, but for assisting railway advancement by addresses to technical institutions, and, at the same time, had opportunities for enjoying his favourite amusement of angling."