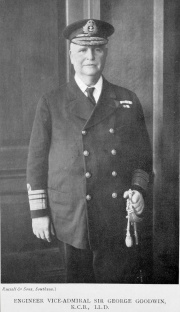 1925 Joined the board of J. Samuel White and Co

1932 Chairman of the company

"...the death of Engineer Vice-Admiral Sir George Goodwin, K.C.B., a former Engineer-in-Chief of the Fleet. Sir George, who was in his eighty-third year, died on April 2nd at his home, "Pen Dre," South Leigh Road, Havant, near Portsmouth.

He was the son of the late Charles Frederick Goodwin, and at an early age became an apprentice at Portsmouth Dockyard and attended the Dockyard School. He was very successful in his examinations and obtained the highest place in the Cambridge Local Examinations..."[More]

He was born in 1862 and became an apprentice in H.M. Dockyard at Portsmouth, where he attended the Dockyard School. He passed highest in all England in the Cambridge Local Examinations and was offered a scholarship at that University. Preferring, however, to enter the Royal Navy he became an assistant engineer in 1882. After taking what was then the equivalent of an honours course at the Royal Naval College, Greenwich, he joined his first ship, HMS Malabar, in 1885, as assistant engineer.

From June 1886, he served almost continuously at the Admiralty or in Chatham Dockyard, being promoted to engineer - the rank equivalent to lieutenant - in 1887, and chief engineer in 1891. His only service afloat was in the second-class cruiser Bellona, from 1894 to 1897. In 1898 he was posted to the Admiralty Dockyard Branch and was promoted to fleet engineer.

He returned to Chatham in 1904, as chief engineer of the Dockyard, holding this position for two years. He was then reappointed to the Admiralty as assistant to the Director of Dockyards and a year later was promoted to engineer captain' and appointed Deputy Engineer-in-Chief of the Fleet under the late Sir Henry Oram. At this period in his career great changes in the propelling machinery of British warships were taking place. With these developments Sir George was closely identified, being largely responsible for the rapid transition from coal, Scotch boilers, and triple expansion engines to oil fuel, water-tube boilers, and geared steam turbines.

Shortly after his retirement he joined the board of Messrs. J. Samuel White and Company, Ltd., and occupied the chair from 1932 to 1935.

Sir George was a keen supporter and a valued Member of the Institution, which he joined in 1922. For several years he served on the Council and was made Vice-President in 1925, and an Honorary Life Member in the following year on his retirement from the Council, to which, however, he returned in 1931 as first chairman of the newly-formed Southern Branch, over which he presided for the first three years of its existence. He was an active member of the Marine Oil Engines Trials Committee, of which he was chairman, and in 1924 he delivered the Thomas Hawksley Lecture on "The Trend of Development of Marine Propelling Machinery". He was a past-president of the Institute of Metals and the Institute of Marine Engineers. In addition he was a Member of the Institution of Naval Architects and had served on the council and as vice-president. He was made an honorary LL.D. of Birmingham University in 1919. For his services in the 1914-18 war Sir George Goodwin received the Russian Order of St. Stanilas, First Class; the Grand Cordon of the Order of the Sacred Treasure; the Distinguished Service Medal of the United States of America; and was made a Commander of the Order of the Star of Rumania."