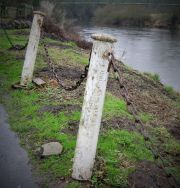 1858 'Burglary and Depredations. — William Cater, son of Mr. Cater, the engineer and machinist of Park-lane, was brought up on two charges. The first was for breaking into the counting-house and other premises of Mr. George Turton, iron and brass founder, .... Early on the morning of the previous Friday, the 12th inst., Mr. Turton found that his counting-house had been broken open, and ninepence in copper, some pencils, and a valuable case of mathematical instruments, had been stolen from the place. The key of the "brass shop," which had been kept in the counting-house, was removed, and was found in the door of the brass-shop. From this shop machine brasses, the weight of from 60 to 80 pounds, had been stolen. The fitting shop had also been opened by means a skeleton key. which still remained in the door, the ring having broken by an ineffectual attempt of the burglar to remove it. From this shop a quantity of brass borings and fittings, and a copper can, had been taken. ....'[2]

Retrieved from "https://gracesguide.co.uk/index.php?title=George_Turton_(Kidderminster)&oldid=1249473"
Categories:
This page was last edited on 29 September 2021, at 15:22.
Privacy policy
About Graces Guide
Disclaimers