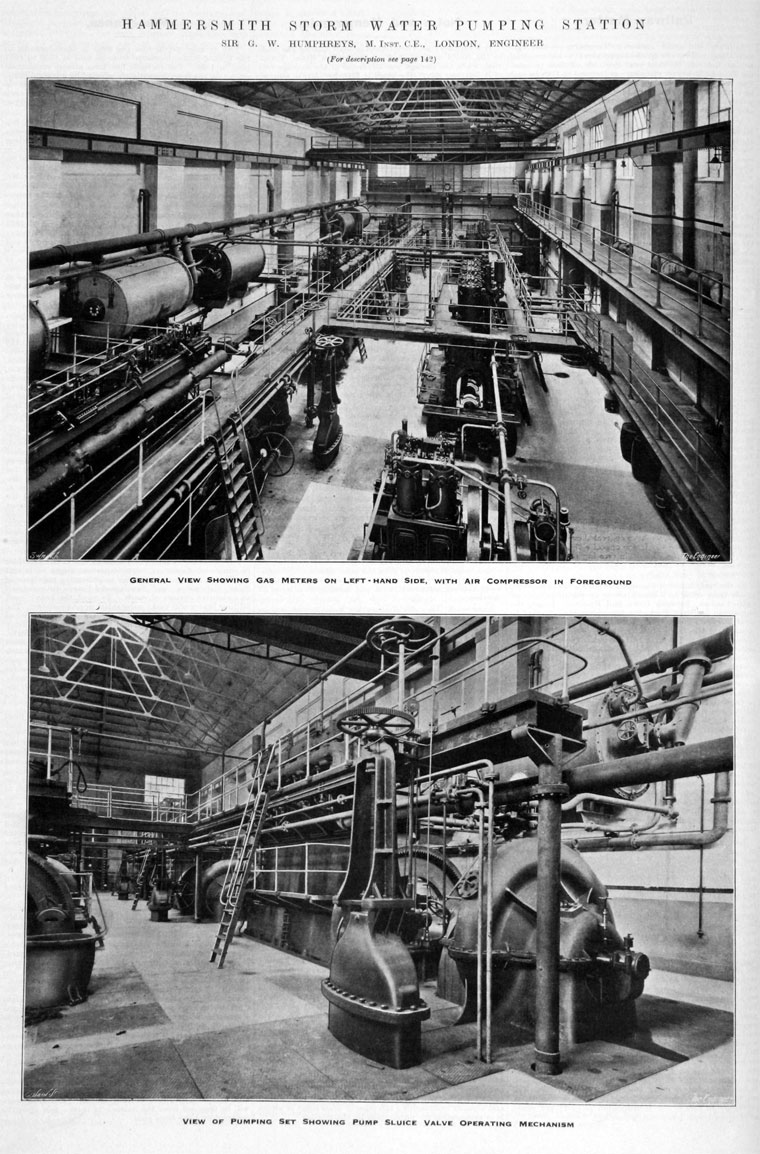 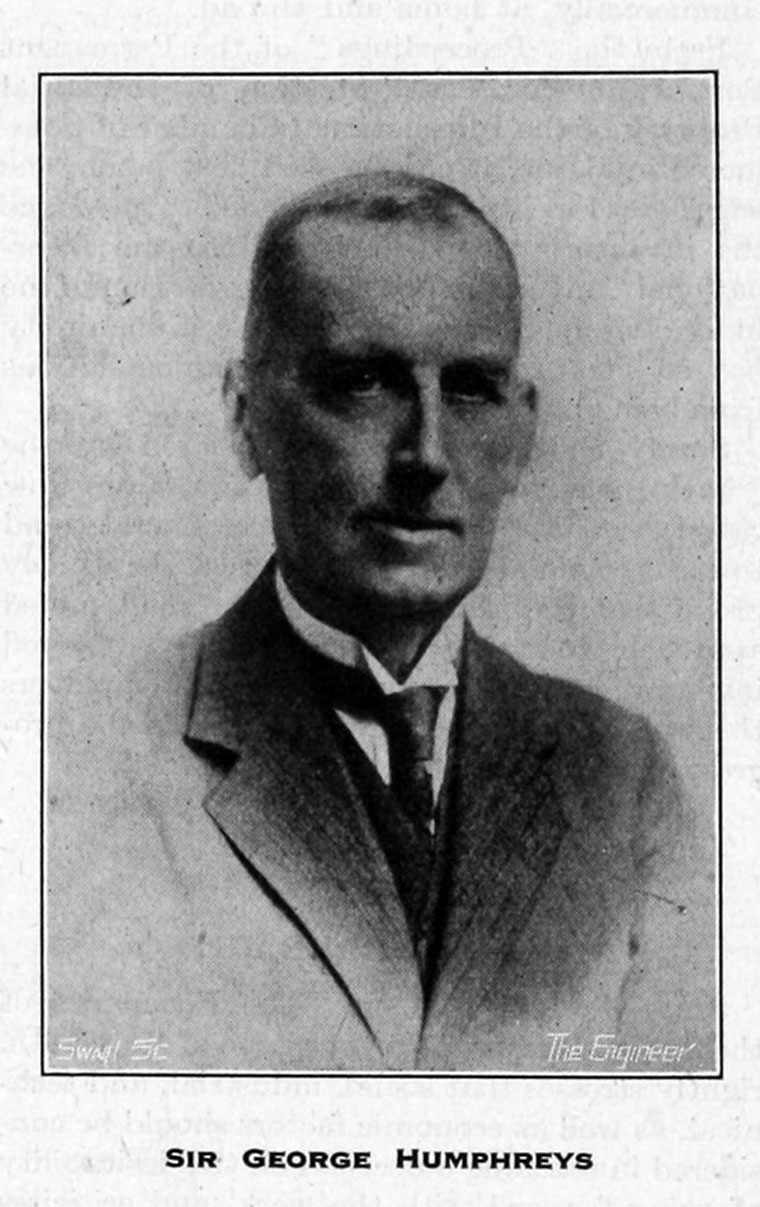 Sir George William Humphreys was director of construction for the contractors engaged upon the building of Portland harbour and its breakwaters and on other sea work, both in England and in France. After being appointed as Chief engineer of the London County Council in 1910, he succeeded Sir Maurice Fitzmaurice as Chief Engineer and Administrator of Housing Schemes of the London County Council.

Sir George initiated several important civil engineering schemes. Among them may be mentioned the Kingsway improvement scheme, the tramway subway and the main drainage scheme of London.

Shortly before he retired, Sir George improved the quality of the water flowing into the river at the Barking sewage outfall by the installation of an activated sludge plant, having a designed capacity for dealing with 5,000,000 to 10,000,000 gallons of tank effluent per day.

He collaborated with Sir Frederick Palmer with the examination of the River Thames defences in London and the schemes for the Charing Cross and Waterloo bridges. He was himself responsible for the design of the new Lambeth Bridge.

During the Second World War, Sir George was Chairman of the Munitions Works Board of the Ministry of Munitions, which supervised the construction of all factories and workshops and the building of aerodromes and aircraft factories in the United Kingdom.

He was a member of the Institute of Civil Engineers, of which he was President in 1930. For some twenty years he was attached to the Engineer and Railway Staff Corps of the Royal Engineers T. A., and retired in 1930 with the rank of Colonel.

He was educated at Mill Hill School and King’s College, London, and served an apprenticeship with Messrs. Griffiths and Hulett, under whom he was engaged on the construction of the Bodmin branch of the Great Western Railway.

In 1885 he became engineering assistant to the late Mr. Woodman Hill on the construction of fortifications and harbour works at Shoeburyness, Sheerness, Harwich, Greenock, Portland, and elsewhere.

In 1890 he was given charge of the harbour works at La Pallice, France, and designed the appliances used in completing the deep-water entrance to the port.

In 1892 he superintended the construction of a harbour at Inchkeith, and in 1894 assumed charge of the works for deepening the approaches to the Hamoaze, Plymouth, in the course of which he designed plant for the removal of nearly 1 million tons of rock below water. Subsequently he was in charge of harbour deepening operations at Holyhead.

In July 1902 he obtained, in open competition, the position of Manager of Works to the London County Council: the works department was discontinued in 1910, and he was transferred to the Chief Engineer’s Department, becoming Deputy Chief Engineer in 1912.

In January 1913 he succeeded the late Sir Maurice Fitzmaurice, Past-President Inst. C.E., as Chief Engineer and County Surveyor, and held that position until his retirement in November 1930; in 1920 he was also appointed Administrator of the Council’s housing development scheme. During his long term of office he initiated several important schemes, including the Kingsway improvement and tramway subway; the main drainage of London; an activated-sludge plant with a designed capacity of from 5 to 10 million gallons of tank effluent per day, to improve the quality of the water flowing into the river Thames at Barking; and the defence works following upon the extensive flooding of the Thames in January 1928. These and other works were referred to in his Presidential Address to The Institution in November 1930.

He collaborated with the late Sir Frederick Palmer, Past-President Inst. C.E., on the schemes for the Charing Cross and Waterloo bridges, and was himself responsible for the design of the new Lambeth bridge. After his retirement in 1930 he practised as a Consulting Engineer in Westminster.

During the war of 1914-1918 he was Chairman of the Munitions Works Board of the Ministry of Munitions, which supervised the building of all factories and the construction of aerodromes in the United Kingdom. His services were rewarded by the bestowal of the C.B.E. in 1920.

In 1921 he was appointed a member of the Committee of Experts entrusted with the preservation of St. Paul’s Cathedral, whilst from 1928 to 1933 he acted as Chairman of the Building Research Board of the Department of Scientific and Industrial Research....[more]