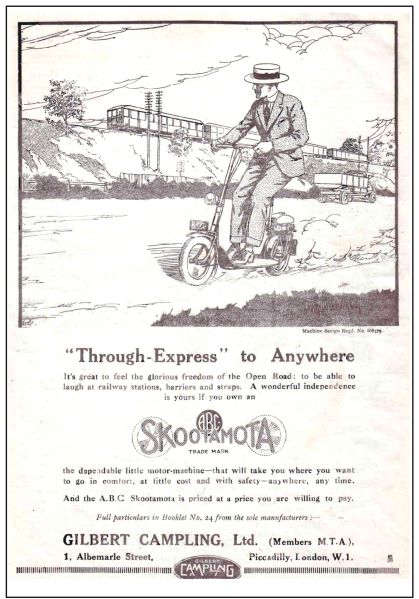 1919 Public company, Gilbert Campling Ltd, floated in 1919 to acquire as a going concern the business and assets of Selsdon Aero and Engineering Co and of Gilbert Campling Ltd; the new company would produce and market the scooter[1]. Engines would be made at Croydon and the assembly of scooters at a new factory at Somerton near Cowes purchased from J. Samuel White and Co

1920 The Skootamota had a design change, to a single cylinder 123cc OHV engine by ABC, also a Bradshaw design, and transmission by chain to the rear wheel. The fuel tank was positioned over the engine and the saddle to the front so that the rider could sit when in motion.

Post 1923 The machine was then built and marketed by Gilbert Campling of Albermarle Street, Piccadilly, London.