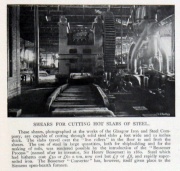 In 1853, the Glasgow Iron Co acquired the derelict works at Motherwell of the West of Scotland Malleable Steel Co for £42,050. The works were managed by Thomas Martin, who improved, and patented, the refining and puddling of iron.

1894 The works were converted to open hearth steel making.

1895 James Riley appointed as the general manager of the company's collieries, blast furnaces, malleable-iron works and steel works. Riley was a leader in the evolution from malleable iron to steel.

1895 The works were the first to use a gas engine to generate power for lighting and the rolling mills, driven by blast furnace gas, from Lamberton and Co in Coatbridge.

1902 The Motherwell works were closed.

1920 Beardmores joined with Swan, Hunter and Wigham Richardson of Tyneside to acquire the Glasgow Iron and Steel Co. However, a general trade depression followed exacerbating the overcapacity in the steel industry, and the plant made losses in 1921 and 1922. Lord Invernairn became chairman.

This was at a time when Beardmore's had expanded their Mossend Steel Works.

The steel plant at Wishaw was closed and eventually dismantled.

The blast furnaces at Wishaw remained in operation and made a profit until 1927, when they also went into loss and were closed in 1930.

1952 the company commissioned and built the Mayfield brickwork in Carluke.

The Glasgow Iron & Steel Company Limited (or GISCOL) still exists as a company.