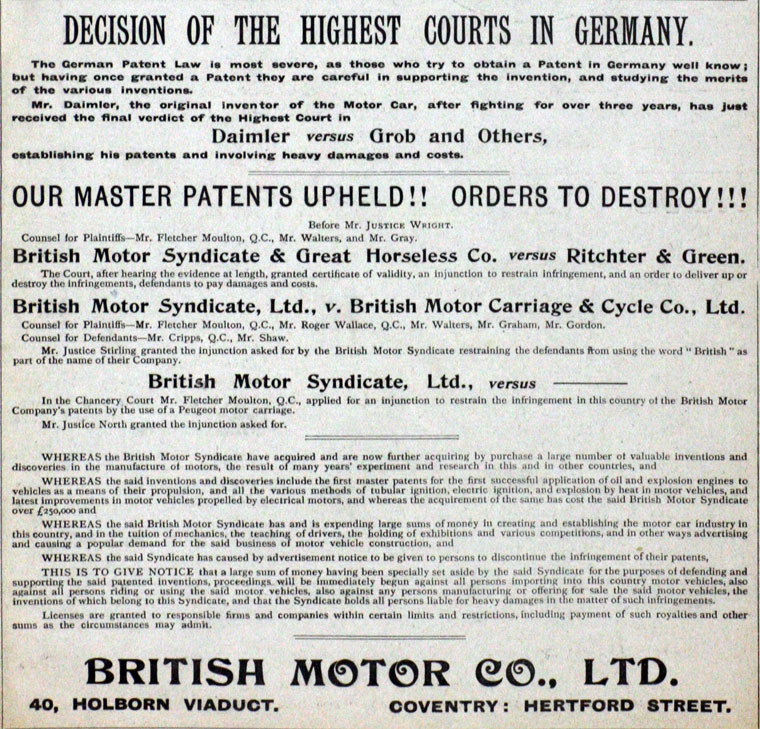 1896. Formed by Harry Lawson with the objective of gathering under one management the licence to use all the patent rights held by the British Motor Syndicate other than those related to cycles; these included Daimler, De Dion, Bollee, Kane-Pennington, Garrard and Blumfield and Serpollet systems. The purchase money was £500,000 which was paid half in cash and half in shares. The capital was £750,000 of which £250,000 was offered for subscription for working capital [1].

1896 April. The company purchased the premises of the Coventry Cotton Spinning and Weaving Co just purchased by Daimler. The premises were four stories measuring 162 ft. by 102 ft. They immediately let the top floor to the Beeston Tyre Syndicate, the second floor to the British Motor Syndicate and Humber had the ground floor. This became known as the Motor Mills.

1896 July. Reynold's Newspaper pointed out that there was a boom in new companies asking for large amounts from the public but which received very much less in subscriptions; examples were Great Horseless Carriage Co and New Beeston Cycle Co [4].

1896 The offer of shares in British Motor Syndicate was criticised in the newspapers such as Pall Mall Gazette on the grounds that the rights it owned and the profits it was entitled to were shared with a number of other companies including Great Horseless Carriage Co, New Beeston Cycle Co, London Electric Cab Co, Daimler Motor Co and caution was advised about subscribing [5].

1896 An engineer, working for the Great Horseless Carriage Co, was summoned for driving a vehicle at more two miles per hour and without a man carrying a red flag. [6]

1897 March. Long article trying to defend against Daimler and the Great Horseless Carriage Co against some poor reports of the company progress. Includes images of the internals of the works.[7]

1897 September 15th. Letter to shareholders complaining of their situation and the poor deal with the British Motor Syndicate.[9][10]

1897 November. Exhibited at the 1897 Stanley Cycle Show. Eight vehicles with frames the same as Daimler and the engines built by them. Included a sporting dogcart, Bollee tandem, De Dion tricycle, a brougham of foreign build and a trade cart. [11]

1897 December. Proposal from Harry Lawson that the company be reorganised which would involve voluntary liquidation, and that the liquidator would enter into agreements with British Motor Syndicate and a new company the Motor Manufacturing Co (MMC) would take over the business of the Great Horseless Carriage Co but with reduction in capital[15][16].

1897 December. A new company, the Motor Manufacturing Co (MMC), took over the business of the Great Horseless Carriage Co but with reduction in capital [18] The company had produced the electric cabs used in London and had an order for a further 75. Another fifty were ordered from another company because they could not produce them[19].

1898 January 7th. EGM held. Resolved to wind up the business and form the Motor Manufacturing Co.[21]