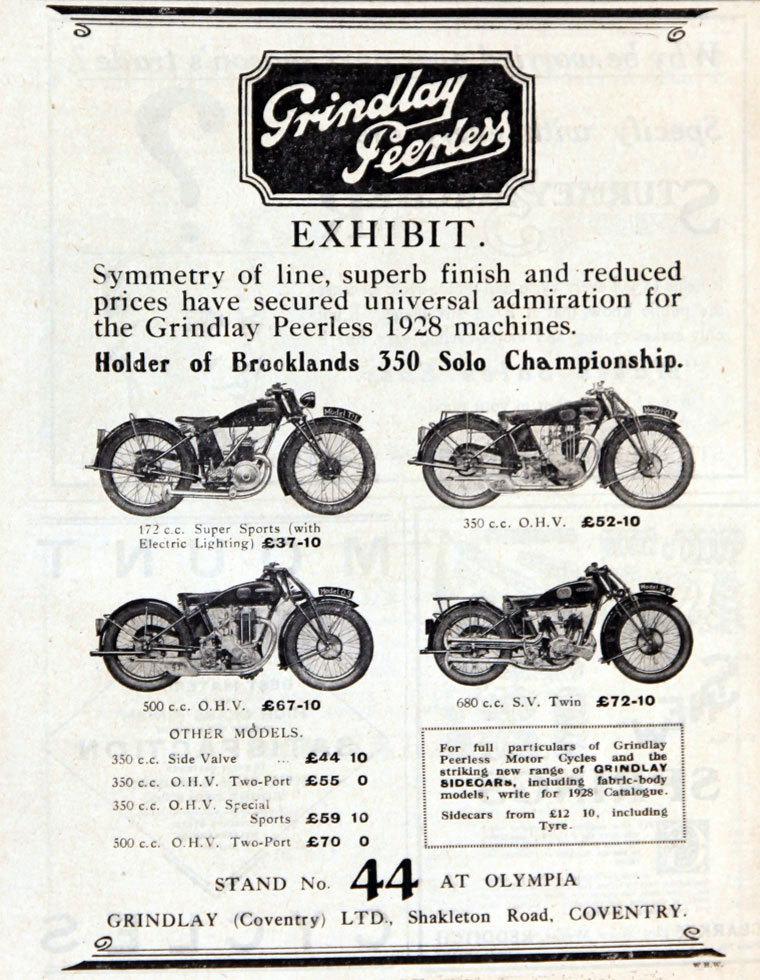 1929. Exhibit at the Brooklands Museum.

Grindlay-Peerless were motorcycles produced from 1923 to 1934, in Shakleton Road, Coventry.

1923 The firm was already well known for producing excellent sidecars under the Grindlay name when they entered the motorcycle market that year. They decided to pass by the usual lightweight market and went straight for a monster sleeve-valve Barr and Stroud V-twin engine at 999cc that drove a three-speed Sturmey-Archer gearbox with chain final-drive. The result was sleek and eye-catching, particularly when it was coupled to one of their own sports sidecars.

1925 The JAP was replaced by a 499cc sleeve-valve Barr and Stroud. Added to those were three smaller singles.

1926 The 488cc JAP returned and that year the make made its mark at Brooklands. Bill Lacey, who was famous for his tuning and riding abilities, began to win using a 344cc JAP-powered Grindlay-Peerless.

1931 The company dropped the Villiers and JAP V-twin engines, but kept some JAP singles for that year alone, before turning to the Rudge Python engine. The Rudge was used in 348cc and 499cc sizes, including the Ulster.

1933 More variants were added that year, but the boom days had passed.

1934 Limited production continued for 1934, after which the company turned their attention to other products.