Castlefield Basin, c.1970. The 18thC warehouse was located immediately to the left of the church. Photo courtesy of D. Ditchfield 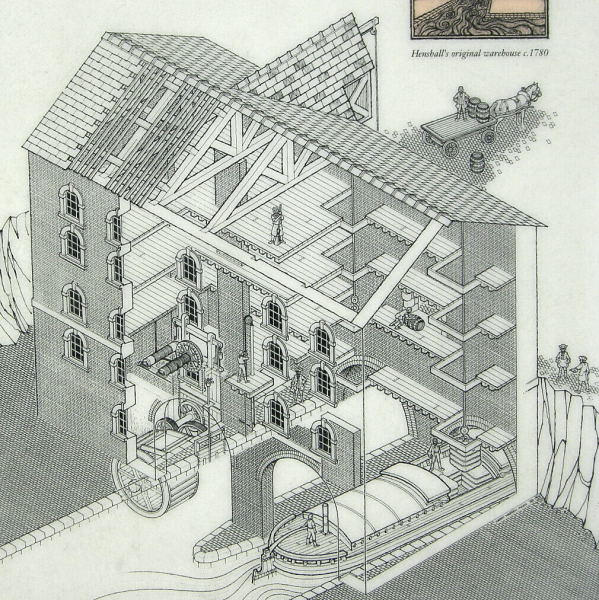 Image from display board adjacent to reconstructed warehouse 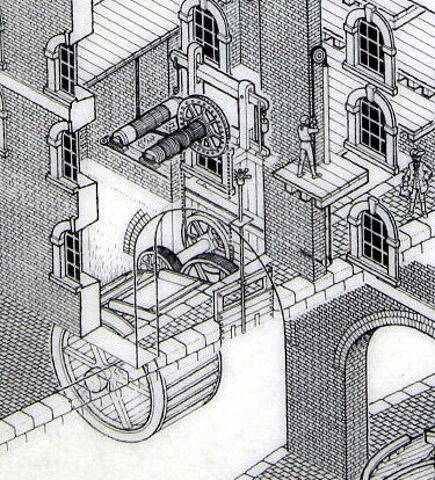 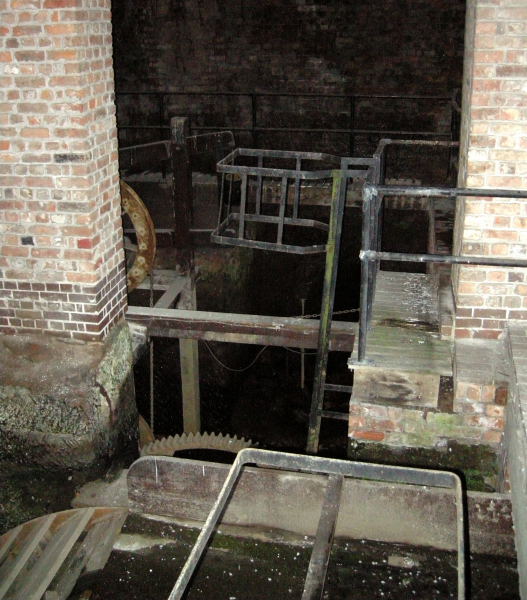 at Castlefield Basin in central Manchester.

The history of the warehouse, and its context and significance, are addressed in detail in 'The grocers’ warehouse, Castlefield: the first true canal warehouse?' by M. D. Nevell.[1]. The following notes draw heavily on this source.

The Grocers’ Warehouse is regarded as the first true canal warehouse - the first warehouse to be built using internal canal arms with facilities to raise and lower goods between floors.

The Bridgewater Canal was constructed by James Brindley to bring coal from the Duke of Bridgewater's mines at Worsley into Manchester. To avoid locks, it followed the contours of the land and terminated at Castlefield, close to the city centre, where it met low cliffs and the River Medlock, which had carved its way through the sandstone. The canal arrived in 1765, and Castlefield Basin was established here. The basin was about 25 ft below the level of the nearby streets, which was somewhat inconvenient for carts taking coal into the city. It was decided to cut a short canal tunnel from the basin into what was known as Castle Hill, to a point where a vertical shaft could be cut to allow containers of coal to be hoisted out of barges and up to street level. Hoisting was done by be slewing crane powered by a large waterwheel.

The coal tunnel was extended further into the rock (a masonry-lined shaft was found during building work in 2007, just north of Bridgewater Street, on the projected line of the tunnel [2]). In spite of the tunnel, coal was also landed on the wharf, and coal continued to be distributed from here for more than 200 years (see coal yards in c.1970 photo).

Note: Another, longer tunnel was later built to take coal from the Bridgewater Canal via the River Medlock to the Piccadilly area of Manchester, to the east of Castlefield. See Duke's Tunnel (Manchester). This opened in 1789, but was short-lived.

The tunnel entrance was soon utilised by Henshall's produce warehouse, later called the Grocers' Company Warehouse, which was constructed against the sandstone cliff. Goad's Insurance Plan dated 1889 shows that it had five storeys on the basin side and three on the street side. It is thought that the first phase of the warehouse was constructed c.1771-7, and later extensions followed. A second canal branch was also added.

Demolition of the warehouse took place in various phases, with the final act in 1960. However it was partly reconstructed in the mid-1980s, retaining parts of walls dating from the 1770s. Reference to the c.1970 photo above shows the surviving back wall and three truncated transverse walls, which were presumably retained in 1960 as buttresses. The original wheel pit has also been retained, and a waterwheel, gears, and hoisting mechanism have been installed.