Grace's Guide is the leading source of historical information on industry and manufacturing in Britain. This web publication contains 148,545 pages of information and 233,966 images on early companies, their products and the people who designed and built them. 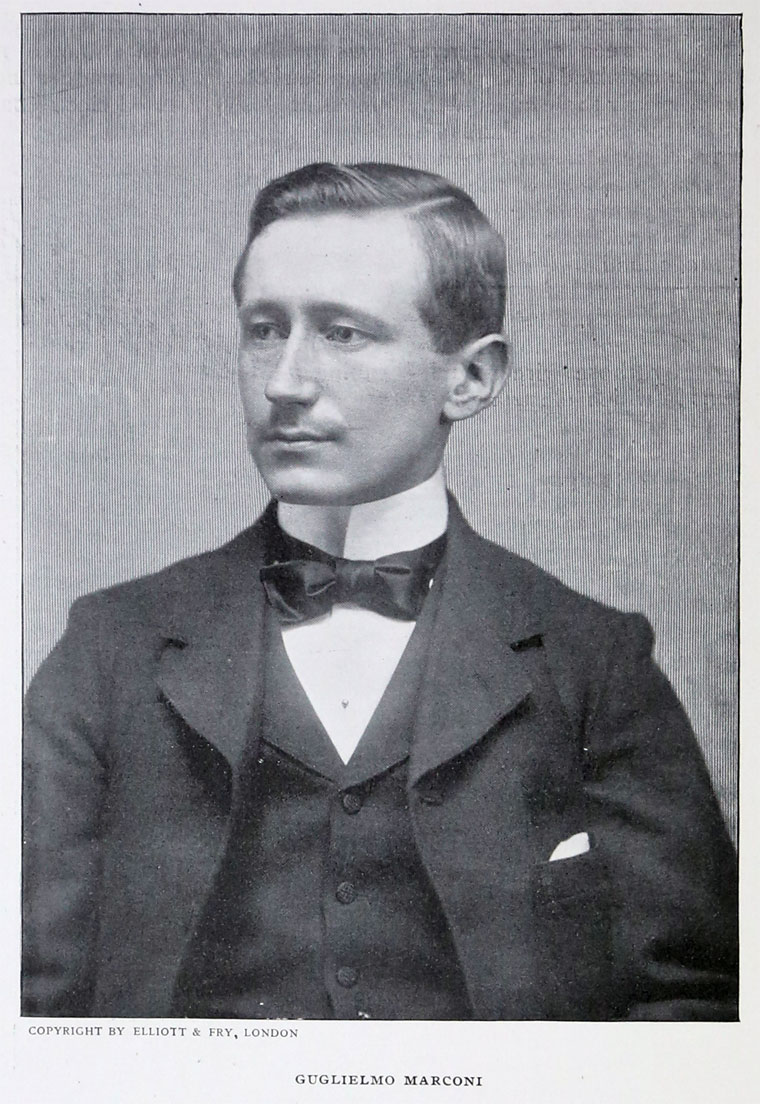 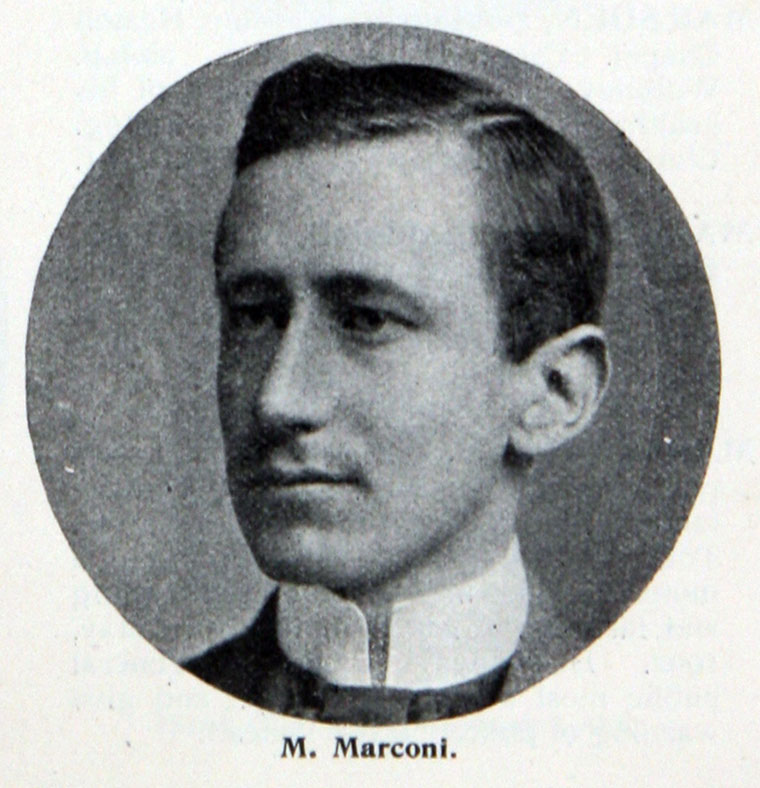 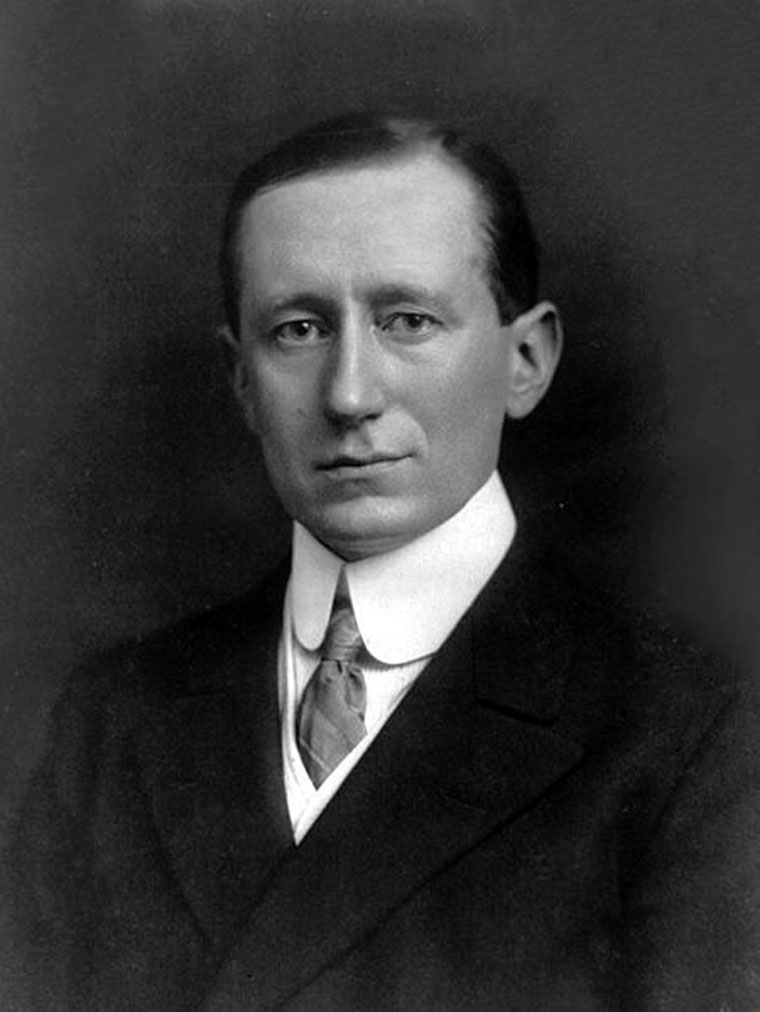 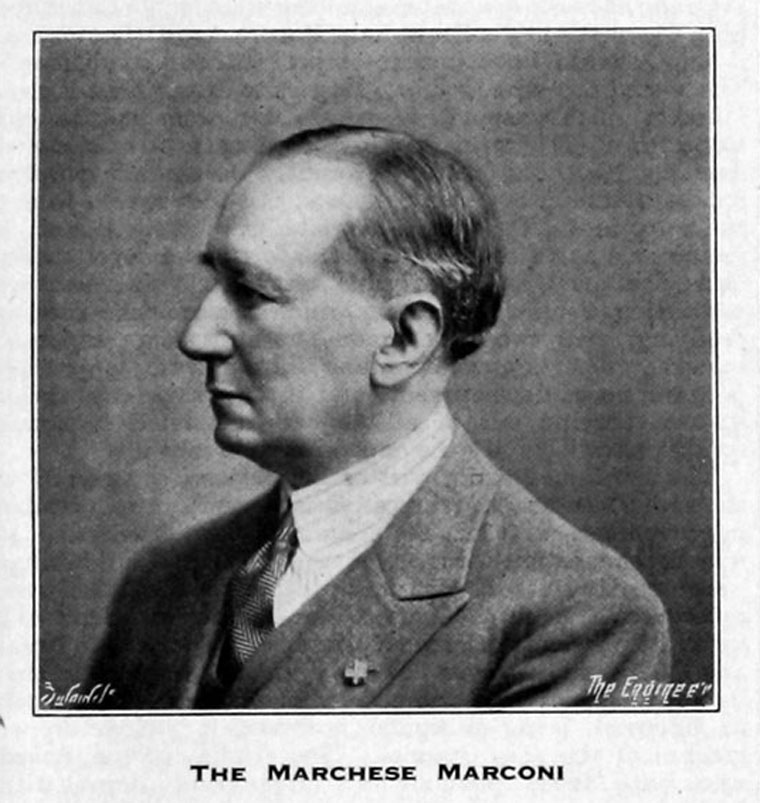 1874 Guglielmo Marconi was born on 25 April in Bologna, Italy, second son of a wealthy Italian landowner and an Irish mother. Due to his poor health, Marconi was educated by private tutors.

1894 At the age of 20, he embarked on a study of the works of Heinrich Hertz (1857-1894) who had been working on confirming Maxwell's electromagnetic theory of light. Marconi started his experiments on the application of Hertzian waves to the transmission and reception of messages over a distance, without wires, at the Villa Griffone at Pontecchio, Bologna, Italy, the family home. He greatly improved on the performance of Hertz's apparatus. The distance for transmission and reception of signals was progressively increased, across a room, down the length of a corridor, from the house and then into fields.

1895 In the early summer and despite an intervening hill, Marconi achieved signal transmission and reception over a distance of about 2km. Success was indicated initially by the waving of a handkerchief and progressed to the need to fire a gun. He tried to interest the Italian government in the work but received only the advice to apply for a patent.

1896 In January, the young Marconi began to consider applying for a patent for his invention, and in February he travelled to Britain. Under the guidance of his cousin Henry Jameson Davis, he filed his final specification for the world's first patent for a system of telegraphy using Hertzian waves. The British Patent number 12039 was filed on the 2nd June. In July of that year he demonstrated his apparatus to the Post Office and a historic demonstration took place at Three Mile Hill on Salisbury Plain on 2 September, with officials from the General Post Office, the Navy and the Army present. Marconi recognised the support he received from the chief engineer of the Post Office, William Henry Preece[1].

1897 Many more experiments followed that year. Marconi returned to Salisbury Plain and achieved a range of 7 miles. He also established communication across the Bristol Channel. The Channel tests were conducted under bad weather conditions. First attempts were unsuccessful but on the fourth day, with the aerial at 300 feet and using a 20 inch (0.5m) spark coil, a new record of 8.7 miles (was achieved. One of the Morse messages sent was ‘let it be so'. The Isle of Wight, off the south coast of England, was the scene of many early Marconi experiments. That year he also set up an aerial and installed his apparatus in the grounds of the Royal Needles Hotel, Alum Bay, and succeeded first in communicating with two hired ferry boats and then with a station set up at Madeira House in Bournemouth on the mainland.[2]

1897 Marconi registered his public company as the Wireless Telegraph and Signal Company on the 20 July.

1900 He patented a syntonic system, which made it possible to send signals simultaneously from several stations without interference. This was of key importance in achieving confidence in transatlantic transmission which Marconi intended to establish.

1901 He organized the transmission from Poldhu in Cornwall to Signal Hill in Newfoundland, about 3400 km. On 12 December 1901 he received the first signal - in Morse code, the letter S. Overnight Marconi became a household name. But he was expelled from Newfoundland under the action of the local telegraphy company which had a 50-year monopoly on telegraphy[3]

Marconi assembled a key scientific team, which supported his work, headed by J. A. Fleming (inventor in 1904 of the thermionic valve).

1909 Marconi shared the Nobel prize for physics with Ferdinand Braun, inventor of the cathode ray oscillator.

1912 Rumours of assistance given to Marconi's company by British government ministers who were shareholders in the company were publicized in relation to the bill setting up the British Imperial Wireless Network. Asquith's government was almost brought down by this but, although Marconi suffered some trouble, in the end his merits were recognized and he received an honorary GCVO in 1914.

1922 Marconi described how electromagnetic waves could be reflected by conductive bodies, thereby predicting what became to be known as radar.

1929 he was made a marquess by King Victor Emmanuel III.

1932 Guglielmo Marconi returned to the study of very short wavelengths and personally supervised the installation of the first microwave telephone link which connected the Vatican City with the Pope's summer residence, Castel Gandolfo.

1934 Guglielmo Marconi was not greatly interested in television. His company in England however, was deeply involved in advancing the new medium.

1935 Guglielmo Marconi moved to Rome never to leave Italy again. He had demonstrated the principles of blind navigation in the early 1930s, and by 1935 Sir Robert Watson-Watt was beginning his experiments with radar off the Suffolk coast.

1937 Guglielmo Marconi died in the early hours of 20 July, aged 63, and his body was laid to rest in the mausoleum in the grounds of Villa Griffone. In a fitting tribute, wireless stations throughout the world fell silent for 2 minutes and the ether was as silent as it had been before Marconi.

The Marchese MARCONI, G.C.V.O., LL.D., D.Sc., Sc.D., was elected an Honorary Life Member of the Institution in 1922, in view of his eminent scientific attainments. Though not the discoverer of electric waves, or of the thermionic valve, for instance, his own work triumphed through his ability from the first to effect improvements of a fundamental character in the transmission of electrical signals. Through his genius, wireless telephony, probably the most important and far-reaching instrument for the diffusion of knowledge since the invention of printing, became not only commercially possible, but universally used.

When only 20 years old, Marconi began his great work by improving the coherer of Branly and Lodge, and in 1896 he conducted successful tests between St. Martin's-le-Grand and the Thames Embankment. During the next four years he was able to transmit signals over increasing distances; his signals from the South Foreland were received at Wimereux, across the Channel, in 1899, and a year later they were picked up at a distance of 200 miles. After many disappointments, due to the wrecking of masts and aerials by storms, he succeeded in sending signals across the Atlantic in 1901, from Poldhu, Cornwall, to Newfoundland. The next few years were chiefly devoted to improving wireless communications across the Atlantic, and the establishment of more powerful stations. When Italy joined the Allies in 1915, Marconi was appointed a lieutenant in the Italian Army. Later he was transferred to the Navy with the rank of commander, and took part in an official Italian mission to the United States in 1917. Two years later he was appointed, by the King of Italy, a Plenipotentiary Delegate at the Paris Peace Conference, in which capacity he signed the peace treaties with Austria and Bulgaria.

After the War his most important work was the successful development of short-wave transmission; in 1926 the British Government decided to employ his company's short-wave beam system for Imperial communications. Subsequently he began to investigate the transmission of very short waves, only 50-100 cm. in length; between 1931 and 1934 he demonstrated from his yacht Elettra that such waves were not overcome by the supposed obstruction due to the earth's curvature, and his system was used successfully for transmissions between the Vatican City and the Papal Palace at Castel Gandolfo. Marconi's great achievements were recognized in many countries; and in his lifetime he received the highest honours, both civil and academic.

Among the distinctions conferred upon him in Great Britain were honorary degrees from the Universities of Cambridge, Oxford, Aberdeen, and St. Andrews, also the Albert Medal of the Royal Society of Arts, and the Kelvin Medal. In addition he was made an Honorary Life Member of theInstitution of Civil Engineers, and of the Institution of Electrical Engineers. In 1929 he received the hereditary title of Marchese. His death occurred in Rome on 20th July 1937, in his sixty-fourth year.

"...death of the Marchese Marconi the electrical engineering world has been deprived of one of its greatest pioneers. He died at his home in Rome on Tuesday last, July 20th, at the age of sixty-three. He was born at Bologna on April 25th, 1874, and was of mixed parentage, his father being an Italian country gentleman who married an Irish lady. He was educated privately at Bologna, Florence, and Leghorn..."[More].