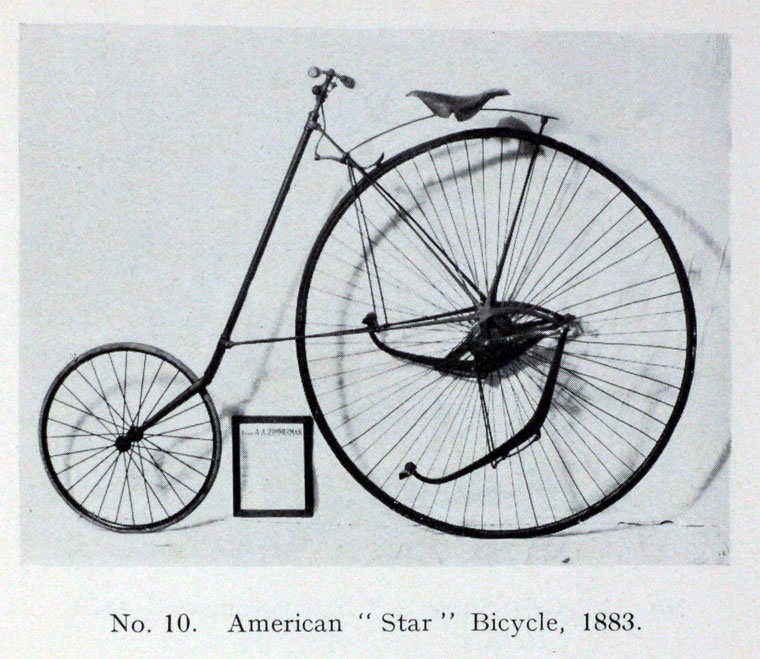 Pressey's invention did not succeed, and the 'Star,' in practical form, was invented by W. S. Kelley, Smithville, Burlington, N.J., patent No. 8240, 1885, and was built by The H. B. Smith Machine Co., of that town, of which company Kelley later became Vice President.

Many well-known American riders raced on 'Stars,' notably George Weber. The great A. A. Zimmerman (whose personal letter accompanies the exhibit) rode a 'Star' prior to adopting the chain-driven 'safety' bicycle. Kaufman and MacAnney, famous American trick cyclists, using 'Star' bicycles, played a ball game like polo, striking the ball with the front wheel of the machine.

The 'Star' was first seen in England when Bert Owen, an American rider of one, attended Harrogate Camp in 1883. J. W. Maude, who saw the machine at Harrogate, told Thomas Humber about it; he obtained a specimen from America and thought seriously of securing the English manufacturing rights. He persuaded George Gatehouse, the well-known Cambridge University amateur racing man, to practise on the 'Star,"' and when he had mastered its peculiarities a series of private trials was run by Gatehouse against Fred. Wood, the noted 'pro', with the result that Humber decided not to take up the 'Star' The trials took place at Long Eaton track, and Wood rode a racing 'ordinary'.

When used for racing, the pedals of the 'Star' could both be depressed together, thus enabling the rider to 'jump' the machine in a close finish, or to get off the mark quickly; I have a photo, taken at Springfield, U.S.A., in 1885, which shows an American rider starting in a race with both pedals at the top of the stroke.

The driving mechanism of the 'Star' consists of two ratchet and pawl clutches, one on each side of the wheel; when the pedal is depressed the leather connecting strap causes the drum to revolve; a pawl on the wheel spindle engages with one of the ratchet teeth inside the drum, and the road wheel is rotated. On the upward stroke of the pedal the clutch goes out of action, in a similar manner to a modern ratchet and pawl free-wheel. [1]