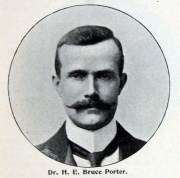 Sir Bruce Bruce-Porter died on Oct. 15 at the age of 79 at the home of his son-in-law and his daughter in Somerset.

Harry Edwin Bruce Bruce-Porter was the son of the late Capt. J. Porter, R.A., and was born at Woolwich. He was educated privately and at the London Hospital, where he won many prizes and scholarships. He qualified as L.S.A. in 1892, and took the Conjoint diploma in the following year. He then joined the Army Medical Staff, as it was called, and won more distinctions at Netley.

After rising to the rank of surgeon-captain he resigned and began private practice in the West End of London. As Dr. Bruce-Porter he was soon well known, and at one time had probably one of the largest and most lucrative general practices in London. He was one of the men who were quick to appreciate the value of the young science of clinical pathology.

His opportunity for distinction came with the war of 1914-18, when he was recalled to service and promoted to command the Third London General Hospital, where he found himself at the head of a team of the leading London consultants. Later he went out to Mesopotamia in command of No. 40 British General Hospital, was mentioned in dispatches, and awarded the C.M.G. in 1917. He had also done good work as physician to King Edward VII's Hospital for Officers.

Outside his strictly professional work Bruce-Porter had many interests and made himself very useful. He was a Deputy-Lieutenant for London. a Fellow of the Institute of Public Health, a member of the Council of the Imperial Service College

Trust, a military member of the Council of the Territorial Force Association of London, a past president of the Hunterian Society, a vice-president of the Shaftesbury Society and Ragged School Union, an honorary member of the Smeatonian Society of Civil Engineers, and a Knight of Grace of the Order of St. John of Jerusalem. He served also on a Home Office committee charged with inquiry into legislation on the treatment of inebriates.

He founded the Bruce-Porter Home for children of Dr. Barnardo's Homes needing orthopaedic treatment. In 1919, then a colonel in the Army Medical Service, he was honoured for his services by the conferment of the K.B.E. In later years he joined forces with Sir Arbuthnot Lane in the latter's New Health Society.

Sir Bruce married in 1896 Essie, daughter of the late Rev. D. Bruce, D.D., of Auckland, New Zealand, and widow of J. H. Honeyman, M.D. They had twin daughters. Lady Bruce-Porter was a Lady of Grace of the Order of St. John of Jerusalem, and died in 1937. Bruce-Porter had been an early and keen devotee of motoring, and was a founder-member of Brooklands.