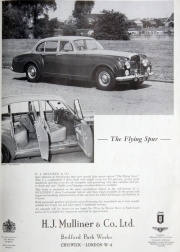 H. J. Mulliner and Co, makers of bespoke luxury bodywork for the world’s finest carriages and cars, of London.

1897 Henry Jervis Mulliner established a coach-building business (H. J. Mulliner)[1] ; at some point this was located in 28 Brook Street, Mayfair, London, an affluent area not far from Conduit Street, Rolls-Royce's first showroom but in 1899 one of the other Mulliner companies, Mulliner London was at this address.

By the late 19th Century, the firm was hand-crafting the coachwork for the new "horseless carriages".

1906 Works were moved from Mayfair to Chiswick[2]

1908 Henry sold the business to John Coall of Edinburgh[3]

The company produced car bodies for several car manufacturers and earned a reputation for quality, even producing for Charles Stewart Rolls a modified two-seater car with room for a hot air balloon to be stowed. W. O. Bentley commissioned Mulliner to build the bodywork for the famous Bentley EXP1.

By 1959 was controlled by John Croall and Sons

1959 Was one of the last independent coachbuilders. Acquired by Rolls-Royce[7]

1959 after some financial difficulties, H. J. Mulliner was taken over by Rolls-Royce and combined with Park Ward. The new division of Rolls-Royce Mulliner Park Ward was created and at its peak employed 750 workers. The premises were located at Hythe Road, Willesden, London.

1961 Death of Frank Piesse, late managing director and brother-in-law of the founder, of H J Mulliner and Co of Chiswick[8]

1964 Mulliners and Park Ward were some of the coach builders which made bodies for the Rolls-Royce: Phantom V and the Bentley Continental[9]

1991 Over its 100-year history the company created countless classic designs, and after its closure in 1991 the name Mulliner Park Ward remained as a division within Rolls-Royce Motors

1998 On the separation of Rolls-Royce and Bentley brands, Mulliner became a division of Bentley Motors.