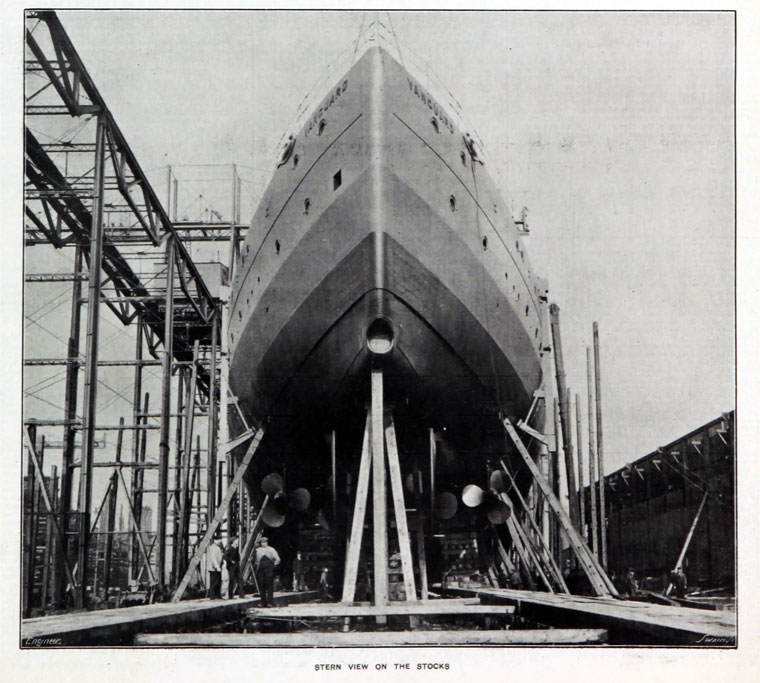 1909 - "On Monday last the first-class battleship Vanguard was launched from the yard at Barrow of Vickers, Sons and Maxim, the naming ceremony being performed by Mrs. Reginald McKenna, wife of the First Lord of the Admiralty. The Vanguard may be called an improved Dreadnought, and her sister vessels are the St. Vincent, the Collingwood and the Foudroyant. She is 500ft. long, with a draught of 27ft. and a beam of 4ft. Her displacement will be about 19,250 tons. She is to be fitted with turbine engines of 24,500 horse-power, which, it is estimated, will give her a speed of 21 knots. Her weight as she went down the ways approached 10 ,500 tons, which is said to be the heaviest weight ever launched for this or any other navy.

The Vanguard is an excellent example of the speed with which battleships can now be built in this country. She was only laid down on April 2nd last, and before her launch on the 22nd inst. the whole of her broadside armour was in position, and she was in many other respects in a particularly forward state. We understand that it is hoped that her trials will be begun before the end of this year, and that she will be in a condition to be handed over to the Admiralty before the end of March next year. Her armament is to consist of ten 12in. guns, a number, not at present specified, of 4in. guns, and torpedo tubes. Her armour amidships is, it is understood, 11in. thick. She is to be fitted with four sets of turbine engines and four propellers." [1]

1917 Vanguard was refitted in Rosyth in December. On the afternoon of 9 July 1917, the ship's crew had been exercising, practising the routine for abandoning ship. She anchored in the northern part of Scapa Flow at about 18:30. There is no record of anyone detecting anything amiss until the first explosion at 23:20. She sank almost instantly, with only three of the crew surviving, one of whom died soon afterwards. A total of 843 men were lost, including two Australian stokers from the light cruiser HMAS Sydney serving time in the battleship's brig. Another casualty was Captain Kyōsuke Eto, a military observer from the Imperial Japanese Navy, which was allied with the Royal Navy at the time through the Anglo-Japanese Alliance. The bodies of 17 of the 22 men recovered after the explosion, plus that of Lieutenant-Commander Alan Duke, who died after being rescued, were buried at the Royal Naval Cemetery at Lyness, not far from the site of the explosion. The others are commemorated on the Chatham, Plymouth and Portsmouth Naval Memorials.[2]

1917 - "On the night of the 9th, H.M.S. Vanguard, while at anchor, was blown up as the result of an internal explosion. The vessel sank immediately, and of those on board but two are alive to-day. Ninety-five of the ship's company were not on board at the time of the disaster. A full inquiry has been ordered. The battleship Vanguard was completed at Barrow in 1910, and had a displacement of over 19,000 tons. Her main armament consisted of ten 12in. guns. She carried a normal complement of 724 officers and men."[3]