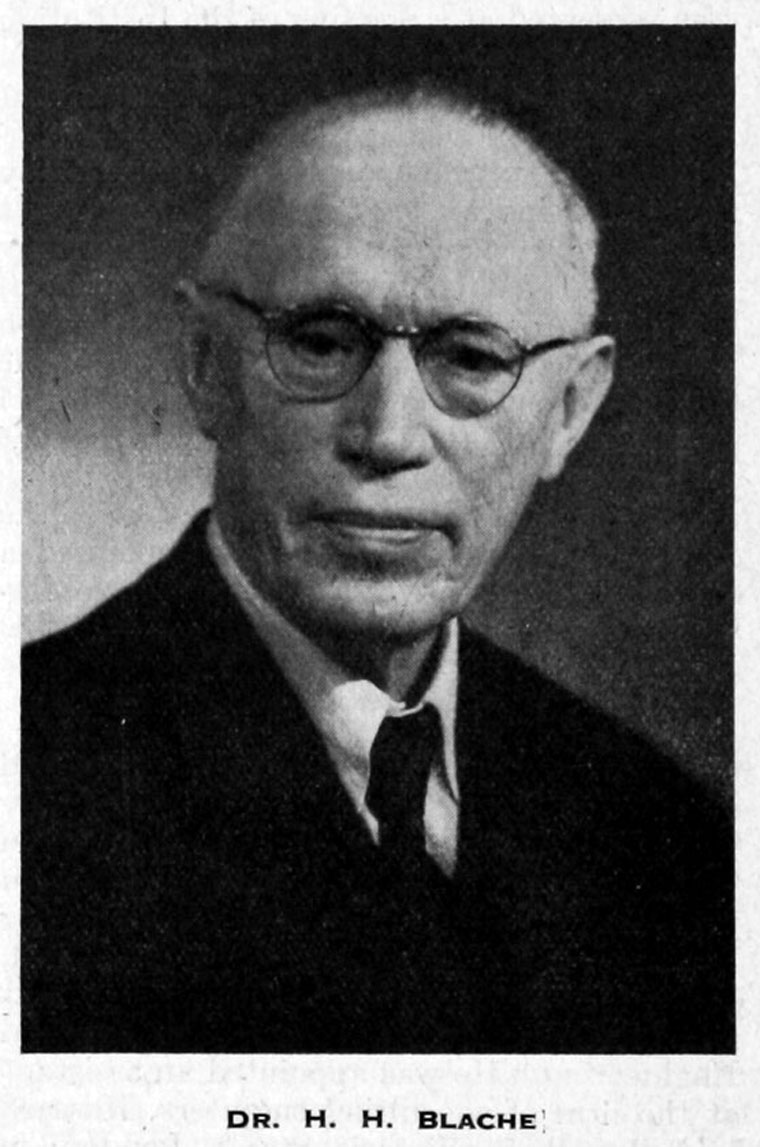 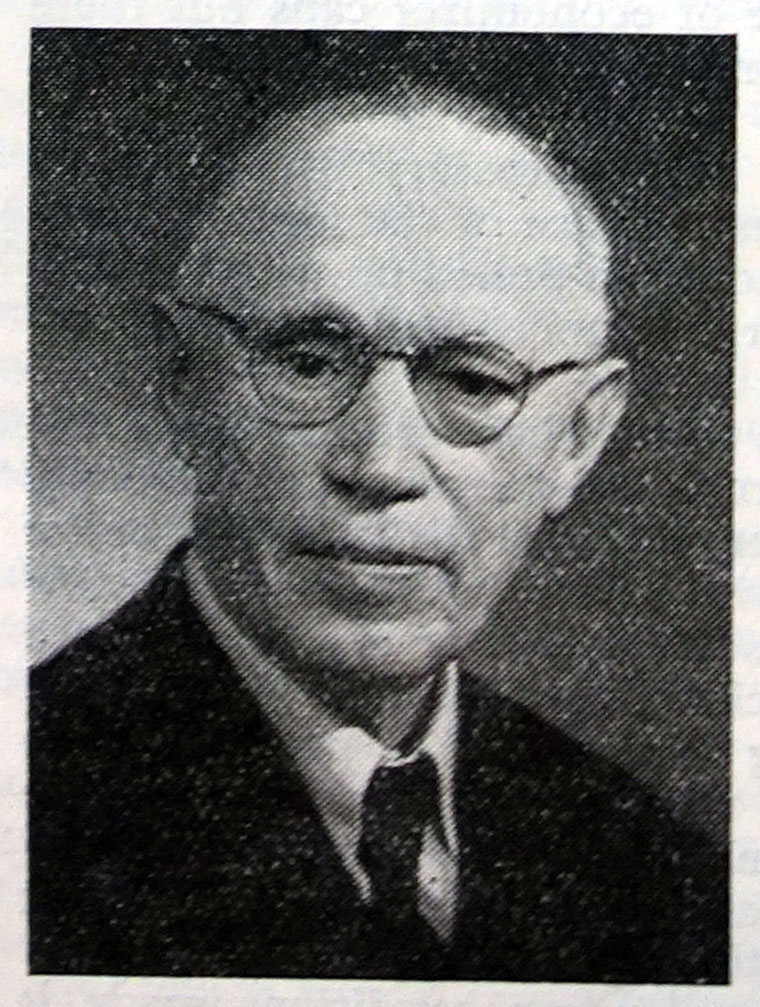 We have learned with deep regret of the death of Dr. H. H. Blache, which occurred in Copenhagen on Monday last, March 17th, following an operation. Dr. Blache, who was seventy-seven, had attained, during his long professional career, an international reputation as a distinguished marine engineer.

Hans Henrik Blache was born, in Copenhagen on September 17, 1874. His father was Christian Vigilius Blache, Professor of the Royal Academy of Art, who was acknowledged in his day to be the most famous painter of marine subjects in Denmark.

After graduating at the Royal Technical University of Copenhagen in 1896, H. H. Blache worked for a year in the Royal Danish Shipyard, as part of his national service. He then joined, in November, 1897, the shipbuilding and marine engineering firm of Burmeister and Wain, of Copenhagen, as a designer, thus beginning an association which continued, almost without interruption, until his death.

To widen his experience, however, Blache, as a young man, spent a couple of years or so on design work with engineering firms in this country and in Germany.

He returned to Burmeister and Wain in 1901, and for the next twelve years was concerned principally with the design and testing of reciprocating steam engines and turbines. On both the theoretical and practical sides of that work, Dr. Blache quickly revealed considerable ability.

In 1912, Burmeister and Wain completed the first ocean-going ship to be driven by internal combustion engines, and soon afterwards, Dr. Blache became the company's chief engineer. From then on, he took full responsibility for its engine design work and in particular for its development of the marine diesel engine.

Early in the first world war, Dr. Blache designed a four-stroke, high-speed, light-weight diesel engine, which was installed in submarines built by his company for the Royal Danish Navy. It was eminently successful and many of its principles were subsequently embodied in much larger low-speed diesel engines produced to Dr. Blache's designs.

In the early 1920s, the United Steamship Company, of Copenhagen, invited Dr. Blache to consider the development of diesel units for high-speed passenger ships, in which the engine space could be minimised as much as possible. His response was a trunk engine, incorporating the best of the design points of his submarine engines.

There quickly followed the four-stroke, double-acting diesel engines of the kind first installed in the motor ship "Gripsholm," in 1925, and a few years later Dr. Blache achieved a further success with a two-stroke, double-acting engine of large horsepower, the design of which included central exhaust piston valves and the use of positive rotary blowers for scavenging.

After these double-acting designs, there came the Burmeister and Wain single-acting, two-stroke engines with centrally-placed piston valves.

Dr. Blache was also responsible for the application of engine driven blowers for the supercharging of four-stroke diesel engines, and for advances in methods of cylinder and piston cooling in large reciprocating engines.

Dr. Blache was appointed managing director of Burmeister and Wain in 1919, and maintained regular personal contact with manufacturers of his firm's diesel engines in most of the shipbuilding countries of the world.

He relinquished the office of managing director in 1935, in which year he joined Harland and Wolff, Ltd., Belfast. He returned to Copenhagen in 1939, and in recent years had been almost wholly engaged in consulting work. For many years, Dr. Blache had participated in the work of professional and technical societies, not only in his own country, but also here. From 1915 to 1936, he was chairman of the Danish Society of Marine Engineers and Naval Architects, and for a number of years served as chairman of the Danish National Committee of the World Power Conference.

Last year, on the recommendation of the Danish Institution of Civil Engineers, Dr. Blache's work was recognised by the award of the James Watt International Medal "for his contributions to the advancement of mechanical engineering, and particularly for his pioneer work in the development of the large marine diesel engine." The medal was presented at a meeting of the Institution of Mechanical Engineers in London, on May 4, 1951, the citation accompanying it acclaiming Dr. Blache as " a brilliant engineer of great courage and resource, backed by sound technical judgment." On that occasion, Dr. Blache was elected to honorary membership of the Institution of Mechanical Engineers, and delivered a James Clayton lecture, entitled "Stages in the Design of the large Burmeister and Wain Marine Diesel Engine."

Dr. HANS HENRIK BLACHE was born in Copenhagen on 17th September 1874. He attended the Royal Technical University and in 1896 received a mechanical engineering degree.

In 1897, after working for a year in the naval yard as part of his conscription period, he entered the employment of Burmeister and Wain, Copenhagen, as an engineering designer. Until 1912 he was chiefly engaged on steam engines and steam turbines.

In 1912 Burmeister and Wain completed the Selandia, the first of the firm's ocean- going vessels to be propelled by internal-combustion engines. The machinery of this famous ship was the responsibility of Ivar Knudsen, but shortly afterwards Dr. Blache, as one of his assistants, was given charge of all engineering designs. From that time onward he was closely associated with the development of the internal-combustion engine, and in the course of years contributed a considerable number of papers to technical societies.

In 1919 Dr. Blache became a managing director of Burmeister and Wain; in 1921 he was created a Knight of the Order of Dannebrog, and eight years later he was decorated with the Silver Cross of the same Order. In 1929, also, the Royal Technical University awarded him an honorary doctor's degree.

In May 1951, at a General Meeting of the Institution, Dr. Blache was presented with the James Watt International Medal, and on the same occasion his name was inscribed on the roll of Honorary Members. After the ceremony, Dr. Blache gave a lecture, in which he recounted in detail his work on the internal-combustion engine, from the beginning until 1934, when his active work ended. Dr. Blache died in Copenhagen on 16th March 1952 and, with his passing, marine engineering on the Continent lost a great man.

To the younger generation of marine engineers the name of Blache, no doubt, means little. But to those men who have seen the development of the motor ship, his name will be linked inseparably with the outstanding achievements of Burmeister and Wain in the 1920's and the early 1930's. That a vital part was played by Dr. Blache cannot be gainsaid. Yet, notwithstanding this, it is not easy to delineate his work. Dr. Blache was less an inventor than a clever, courageous, adaptive designer. Ingenuity, rather than simplicity, was, in general, a characteristic of his engines. In the ultimate analysis, Blache's eminence rested essentially upon his own forthright, open, vigorous personality. If it be true in engineering, as in other departments of life, that the hour calls forth the man, then such a man was Dr. Blache. Wiser men there were, abler men and cleverer men, but there was no one gifted with the authoritative manner and the penetrative force of Blache. A fine figure of a man, his courage and the intensity of his convictions almost invariably won for him the confidence of hesitant and critical shipowners in a decade when the future of the motor ship was being wrought.

There was nothing subtle or equivocal in the make-up of Dr. Blache. An intense individualist, he did not accept criticism easily. As a corollary, people either liked him or they did not like him. His forthrightness tended to over-simplify his judgements, to the derogation of those finer distinctions which mean so much in the complex pattern of life. The answer to daily problems is not always yes or no; the colour is not always black or white. To many people it was incomprehensible that, for years, he should have thrown his weight against the two-stroke engine, against the supercharging of the four-stroke engine, against the application of airless injection, and so on, when the inevitability of these developments was crystal clear to all his contemporaries. It would be purposeless, now, to offer explanations.

Arising out of the economic depression of twenty years ago, widespread changes inside the Burmeister and Wain organization were necessary and Dr. Blache was given a special, non-executive post. This eventually led to the nominal post of consultant to Harland and Wolff, Ltd., in Belfast, an arrangement which lasted from January 1937 to November 1938. By then his creative years were over and the sojourn in Belfast became a transitional interval between active life and retirement.

Returning to Denmark, he became consultant for a shipbuilding concern there. On this less active plane he continued to the end of his days. Amongst the happiest and most stimulating experiences of Dr. Blache's life must be reckoned his meetings with the men who direct the manifold activities of Harland and Wolff. Always did he have their support, always their affection and respect. In return, his tribute to his old Belfast friends was unstinted.