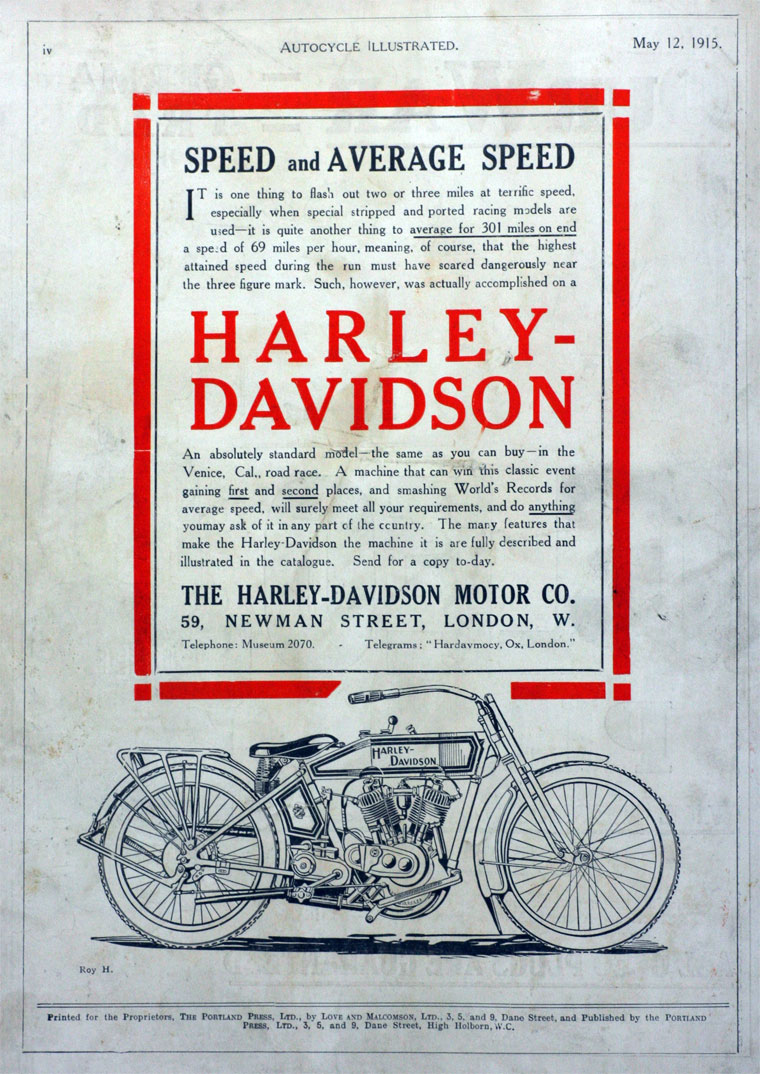 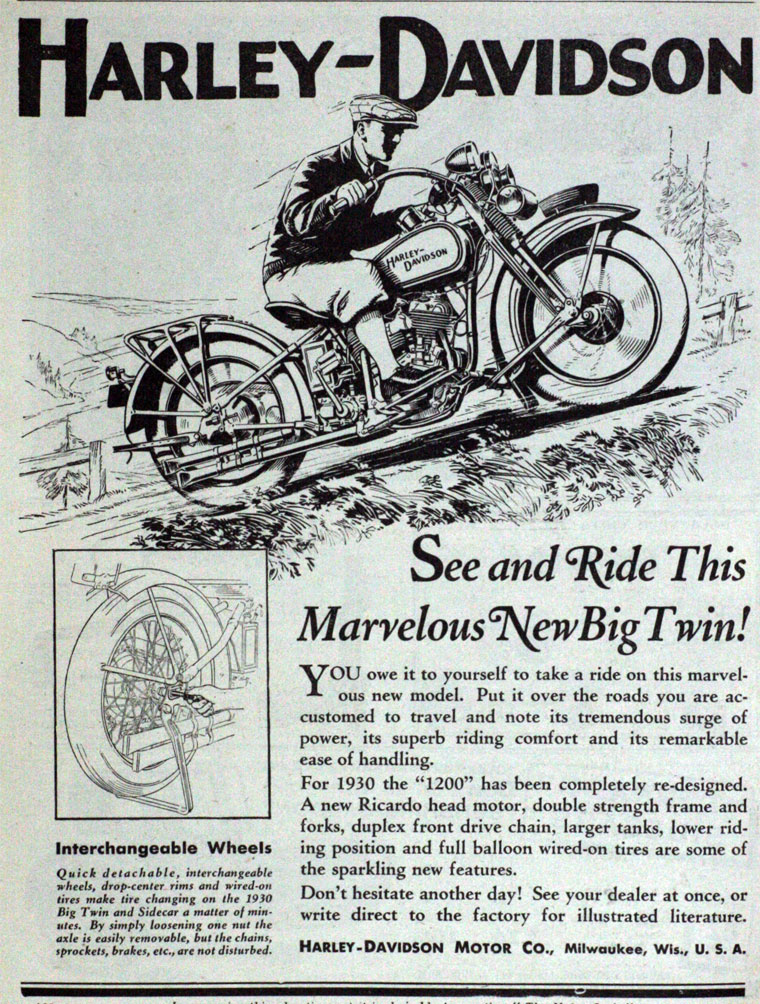 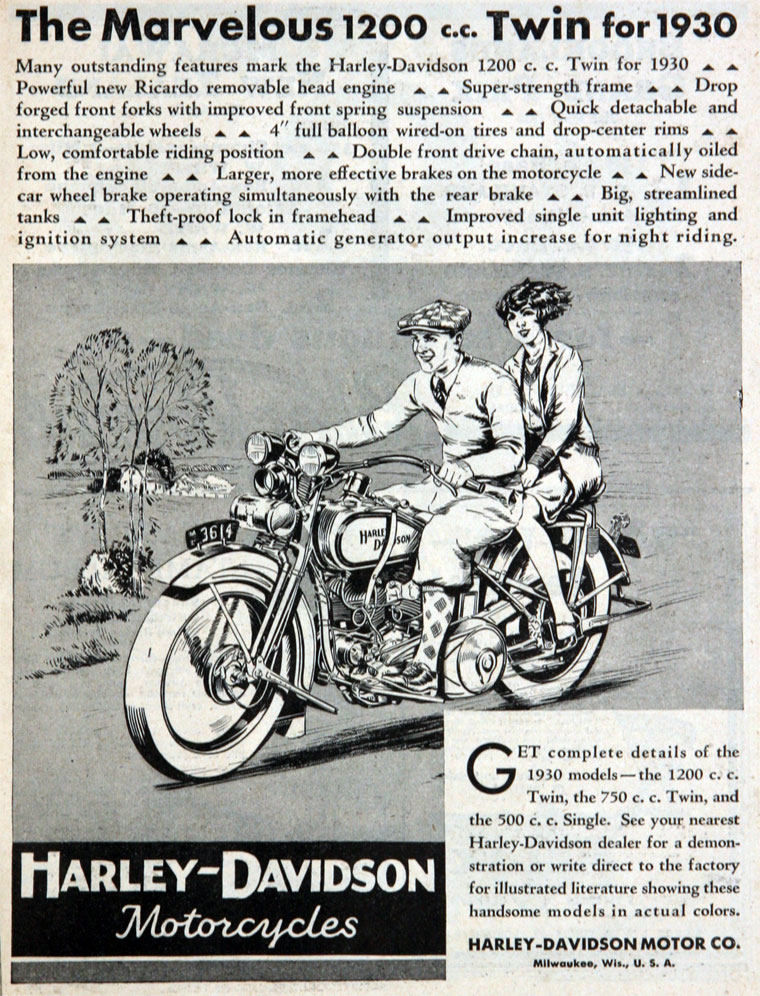 The Harley-Davidson, Inc. (NYSE: HOG) is an American manufacturer of motorcycles based in Milwaukee, Wisconsin, United States.

1903 The company considers 1903 to be its year of founding, though the Harley-Davidson enterprise could be considered to have started in 1901 when William S. Harley, age 21, drew up plans for a small engine that displaced 7.07 cubic inches (116 cc) and had four-inch flywheels. The engine was designed for use in a regular pedal-bicycle frame.

Over the next two years Harley and his boyhood friend Arthur Davidson labored on their motor-bicycle using the north-side machine shop of their friend Henry Melk. It was finished in 1903 with the help of Arthur's brother, Walter Davidson. Upon completion the boys found their power-cycle unable to conquer Milwaukee's modest hills without pedal assistance. Will Harley and the Davidsons quickly wrote off their first motor-bicycle as a valuable learning experiment.

Work was immediately begun on a new and improved machine. This first "real" Harley-Davidson motorcycle had a bigger engine of 24.74 cubic inches (405 cc) with 9-3/4 inch flywheels weighing 28 pounds. The machine's advanced loop-frame was similar to the 1903 Milwaukee Merkel motorcycle. They also got help with their new engine from outboard motor pioneer Ole Evinrude. Elder brother William A. Davidson also lent a hand.

The prototype of the new improved loop-frame model was assembled in a 10 by 15-foot (3 by 5 meter) shed in the Davidson family backyard. The machine was functional by 8 September 1904 when it was entered in a Milwaukee motorcycle race, the first known appearance of a Harley-Davidson motorcycle.

1905 In January 1905 small advertisements were placed in the "Automobile and Cycle Trade Journal" that offered bare Harley-Davidson engines to the do-it-yourself trade. By April, complete motorcycles were in production on a very limited basis. In 1905 no more than a dozen machines were built in the backyard shed. (Some years later the original shed was taken to the Juneau Avenue factory where it would stand for many decades as a tribute to the Motor Company's humble origins. Unfortunately, the first shed was accidentally destroyed by contractors in the early 1970s during a clean-up of the factory yard.)

1905 In 1906 Harley and the Davidsons built their first factory on Chestnut Street (later Juneau Avenue). This location remains the Motor Company's corporate headquarters today. The first Juneau Avenue plant was a modest 40 by 60-foot single-story wooden structure. That year around 50 motorcycles were produced.

1907 William S. Harley graduated from the University of Wisconsin-Madison with a degree in mechanical engineering. That year additional factory expansion came with a second floor and later with facings and additions of Milwaukee pale yellow ("cream") brick. With the new facilities production increased to 150 motorcycles in 1907. That September a milestone was reached when the fledgling company was officially incorporated. They also began selling their motorcycles to police departments around this time, a tradition that continues today.

Production in 1905 and 1906 were all single-cylinder models with 26.84 cubic inch (440 cc) engines but as early as February of 1907 a prototype model with a 45-degree V-Twin engine was displayed at the Chicago Automobile Show. Although shown and advertised, very few dual cylinder V-Twin models were built between 1907 and 1910. These first V-Twins displaced 53.68 cubic inches (880 cc) and produced about 7 horsepower (5 kW). This gave about double the hill-climbing power of the first singles. Top speed was about 60 mph (97 km/h). Production jumped from 450 motorcycles in 1908 to 1,149 machines in 1909.

1911 An improved V-Twin model with mechanically operated intake valves was introduced. (Earlier V-Twins had used "automatic" intake valves that opened by engine vacuum). Displacing 49.48 cubic inches (810 cc), the 1911 V-Twin was actually smaller than earlier twins, but gave better performance. After 1913 the majority of bikes produced by Harley-Davidson would be V-Twin models.

1913 The yellow brick factory had been demolished and on the site a new 5-story structure of reinforced concrete and red brick had been built. Begun in 1910, the red brick factory with its many additions would take up two blocks along Juneau Avenue and around the corner on 38th Street. Despite the competition, Harley-Davidson was already pulling ahead of Indian and would dominate motorcycle racing after 1914. Production that year swelled to 16,284 machines.