Structural Ironwork in the Museum. Exhibit at Birmingham Museum.

Structural Ironwork in the Museum. Exhibit at Birmingham Museum.

Structural Ironwork in the Museum (detail). Exhibit at Birmingham Museum. 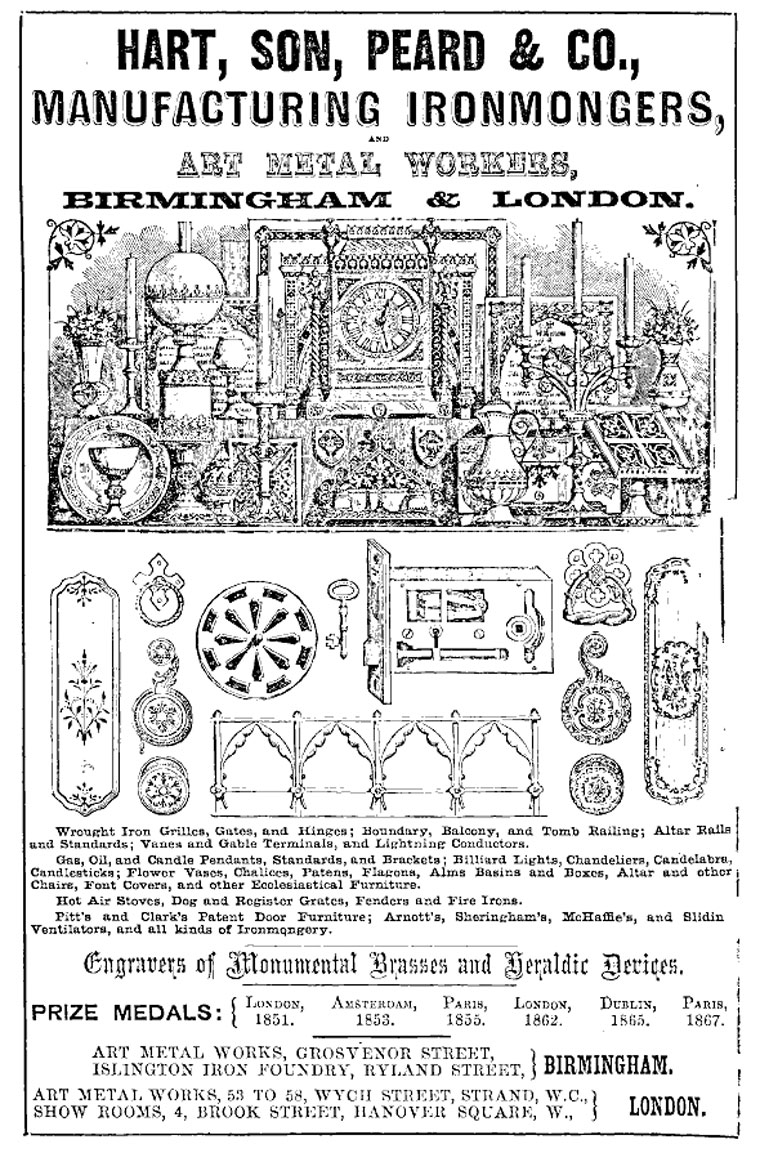 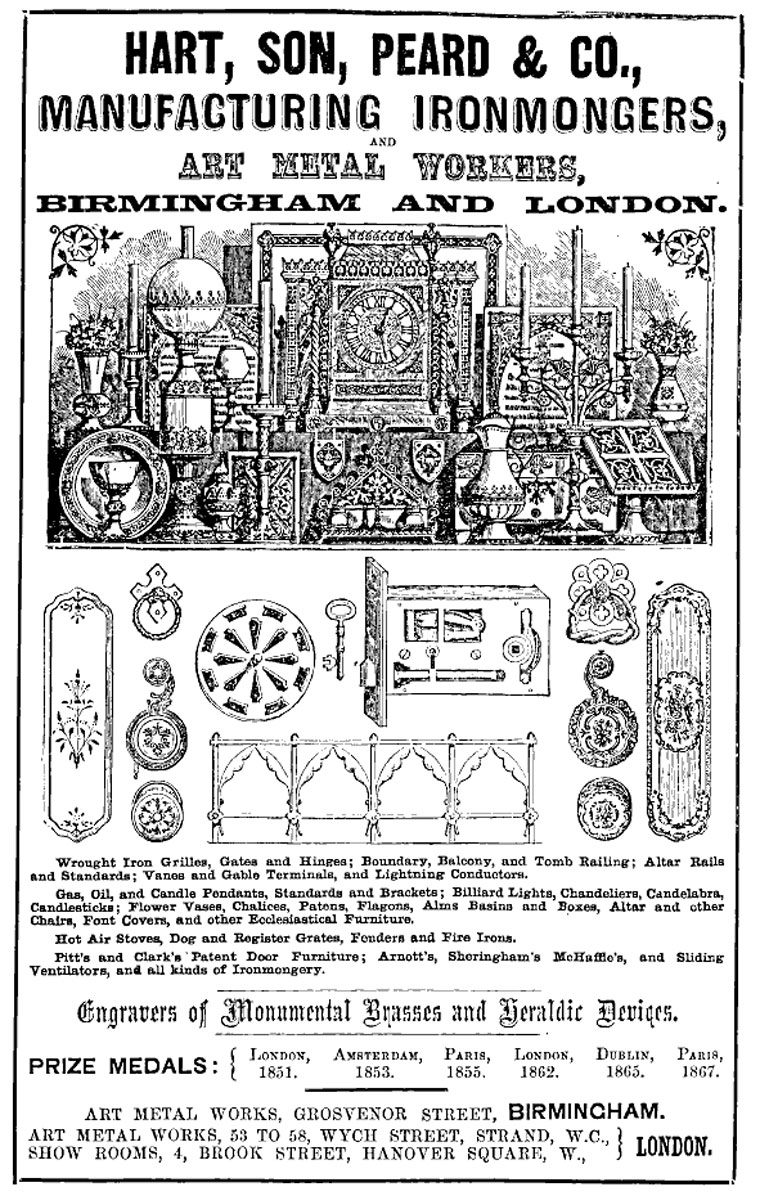 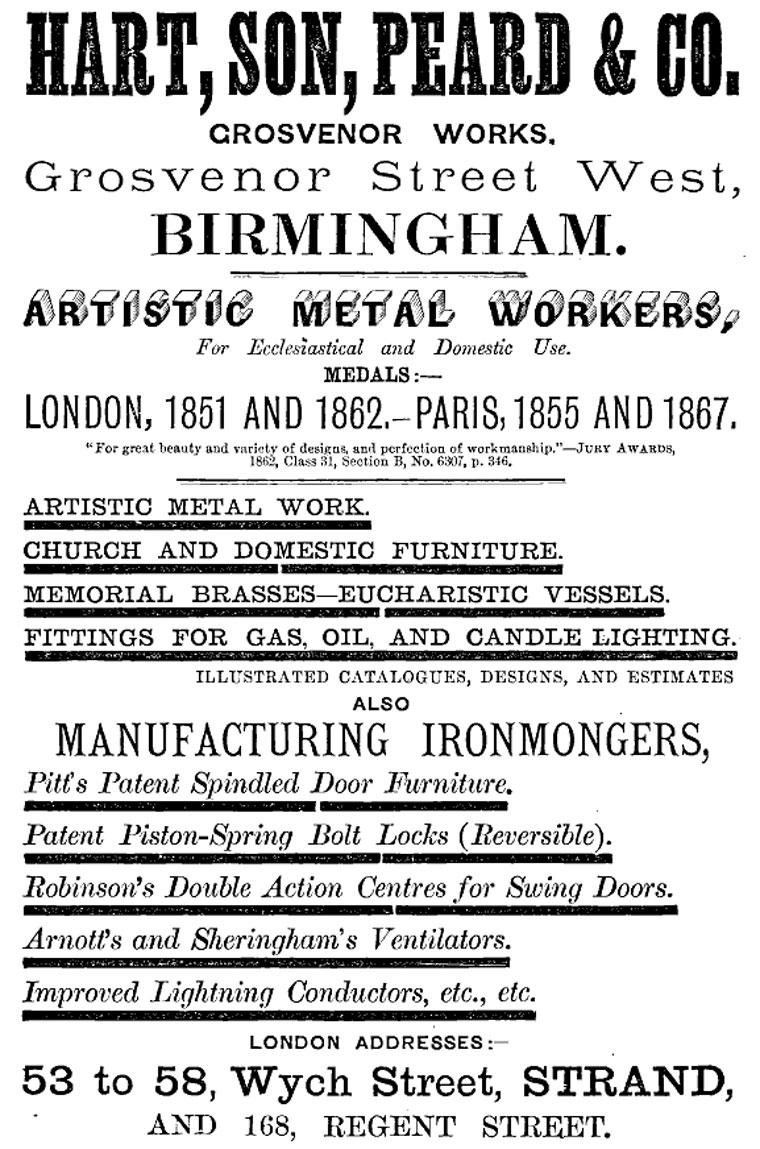 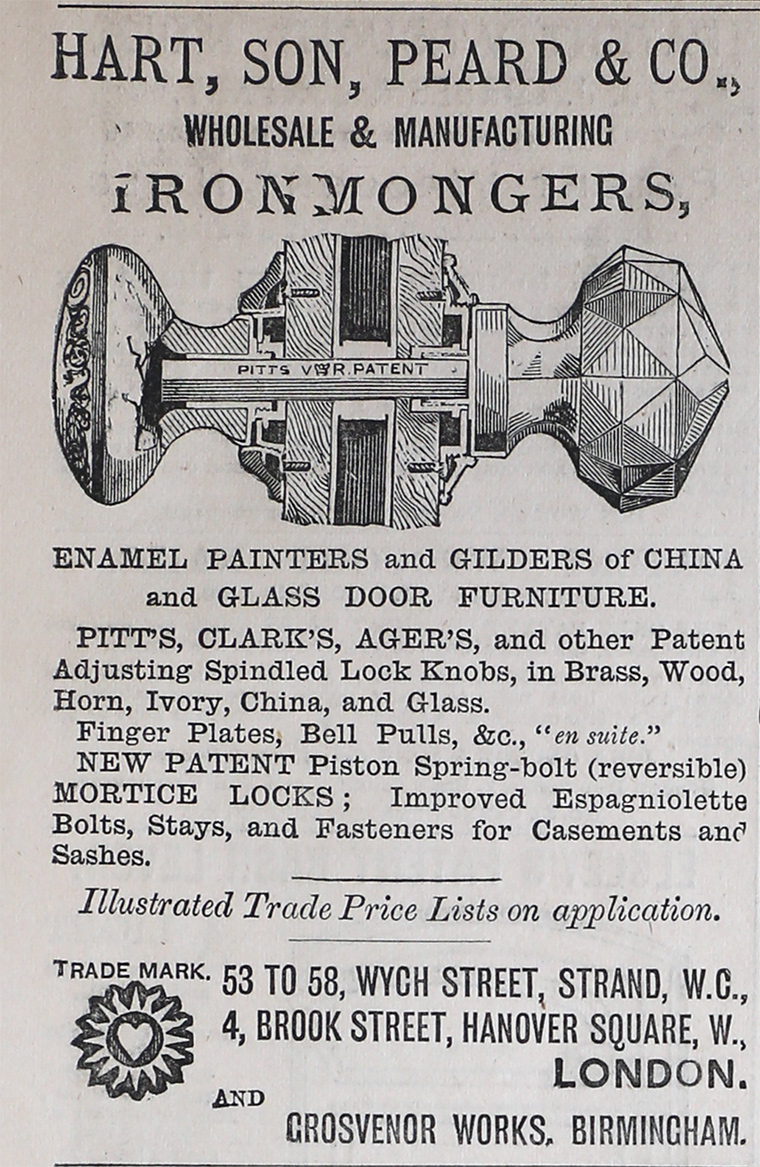 c.1840 Hart and Son were founded by Joseph Hart, manufacturing art metal for ecclesiastic and domestic use.

1856 Hart and Son were at Wych Street

c1866 Merger of the two businesses: Hart and Son and Peard and Jackson to form Hart, Son, Peard and Co.

The business specialised in brass, iron and silver ecclesiastical fittings, light fittings and a wide range of interior and exterior architectural cast iron and wrought iron work. They participated in a number of International Exhibitions as well as regional exhibitions throughout the Staffordshire and Birmingham areas and sponsored prizes at various Birmingham Art and Design Schools

1870 Patent to Thomas Peard, of the firm of Hart, Son, Peard, and Co., of Wych-street, in the county of Middlesex, and James John Castle and Isaac Holmes, both in the employ of the said firm, in respect of the invention of "improvements in the apparatus for adjusting and securing the knobs or handles of locks, latches, and other fastenings."[2]

1871 Patent to Henry Davis, of Birmingham, in the county of Warwick, Pattern Maker to Messrs. Hart, Son, Peard, and Co., of London and Birmingham, for the invention of "certain improvements in the mode of constructing sash frames and sashes, and hanging the same so as to permit the sashes to be reversed or revolved at pleasure for cleaning or repairing."[3]

A number of notable designers, including J. P. Seddon, B. J. Talbert, William Burgess and William Butterfield, worked for the company which also completed many commissions for the architect Alfred Waterhouse.

The company had showrooms in Brook Street and Regent Street, London. It had a factory in Drury Lane, a foundry in Birmingham (which operated as the Art Metal Works from 1886 to 1913), and an additional foundry in Ryland Street, Birmingham known as the Islington Iron Foundry.

The Birmingham locations were supervised by Charles Hart, while Jackson ran the company finances and Peard ran the London businesses, with all three businesses entering marks with the London Assay Office.

1885 Supplied ironwork for the new Birmingham Museum and Council offices