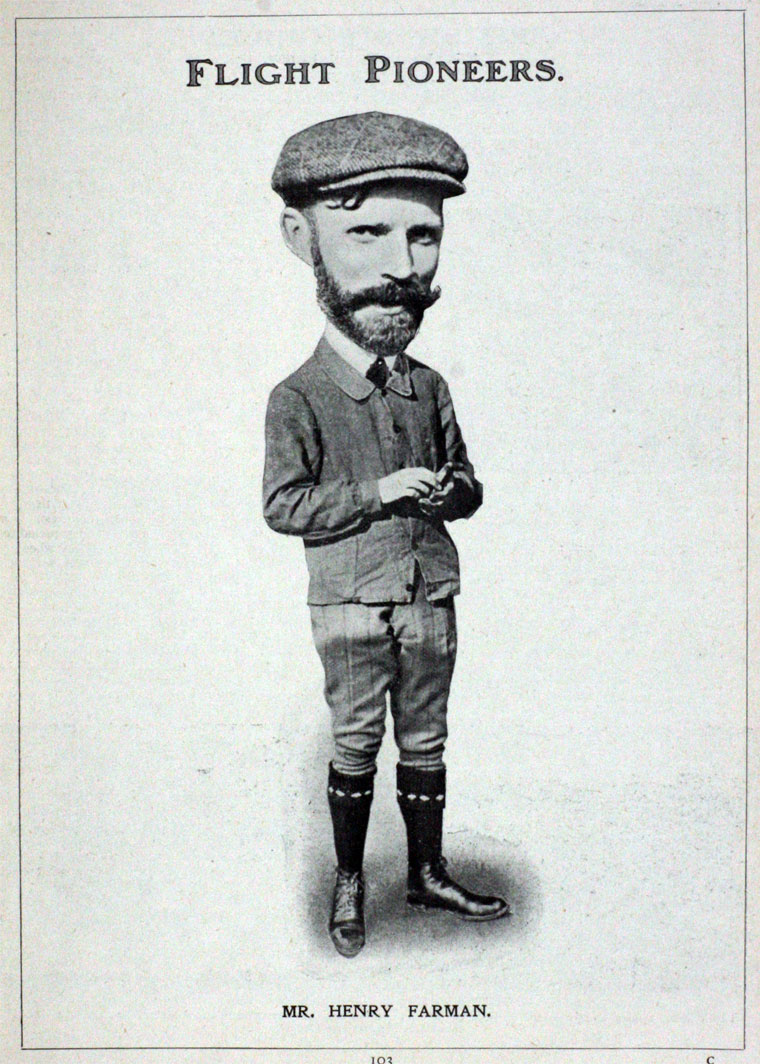 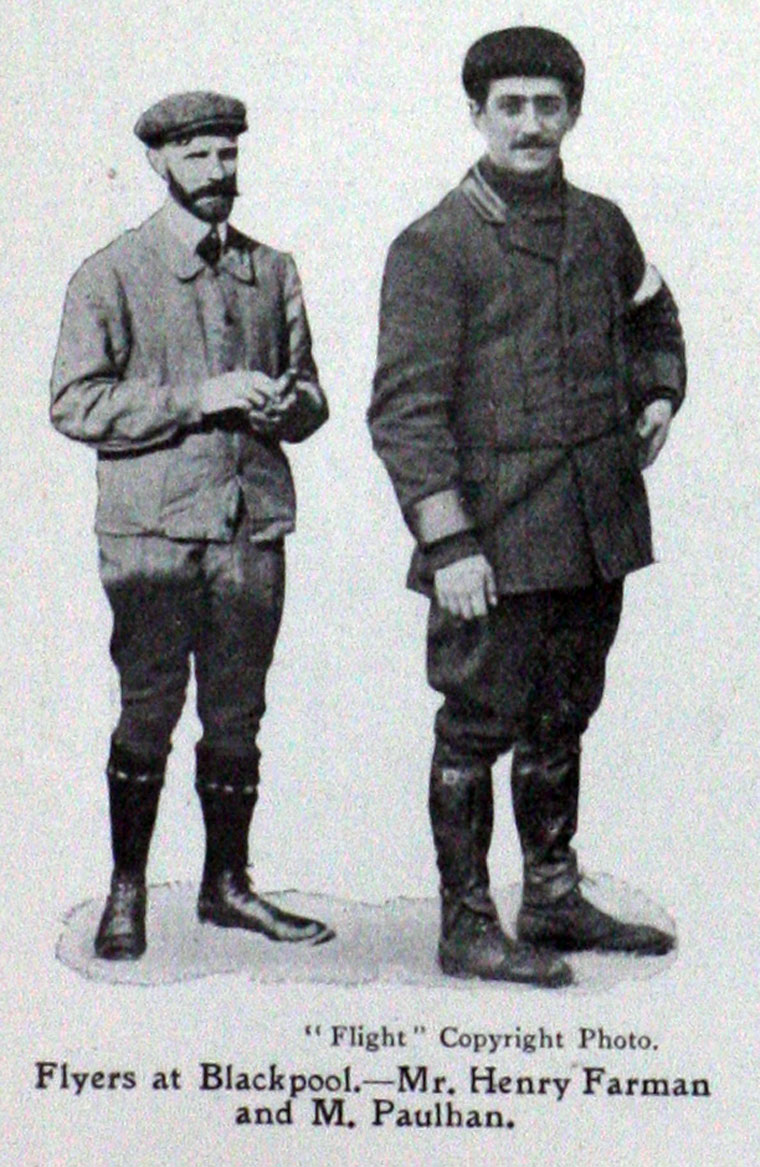 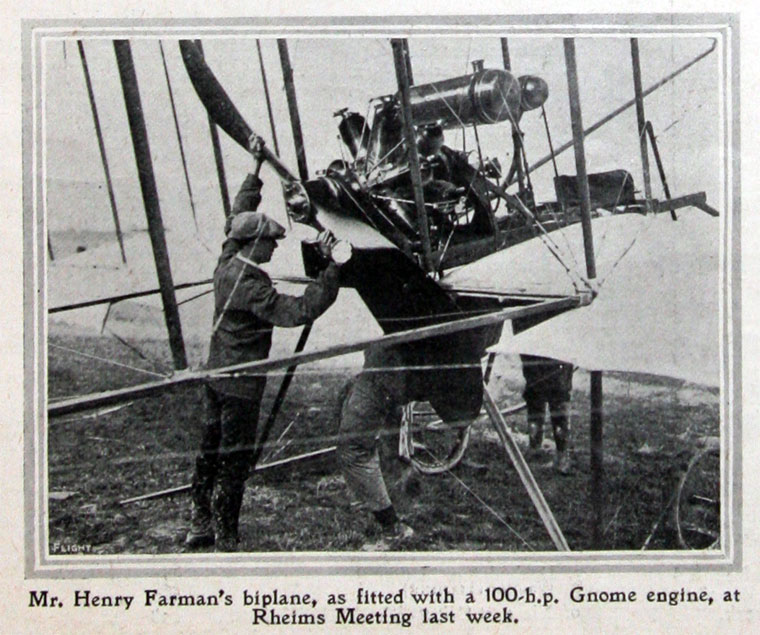 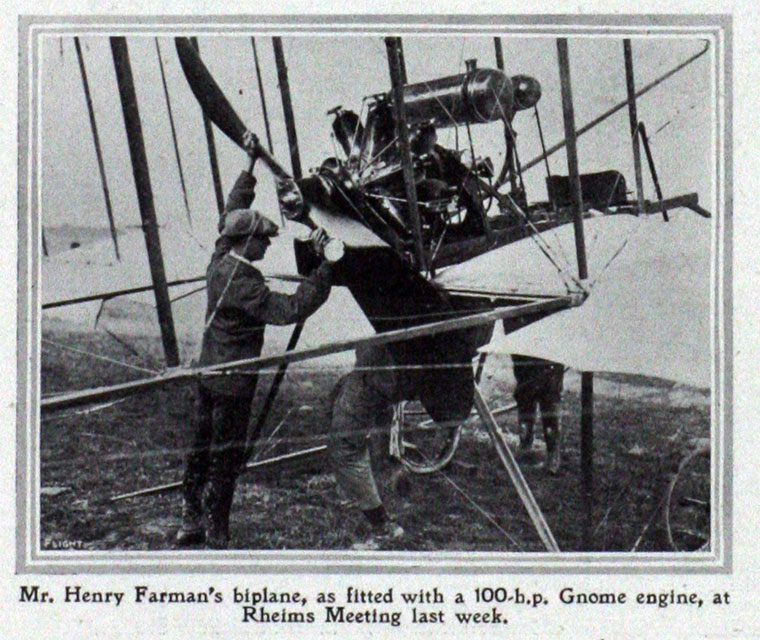 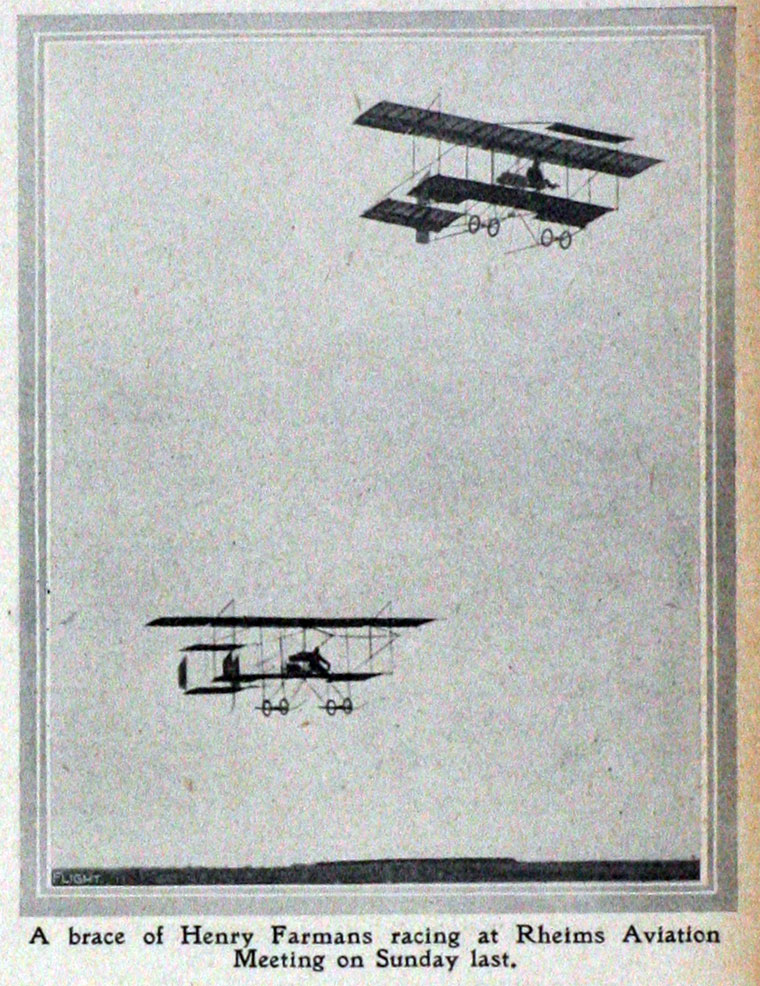 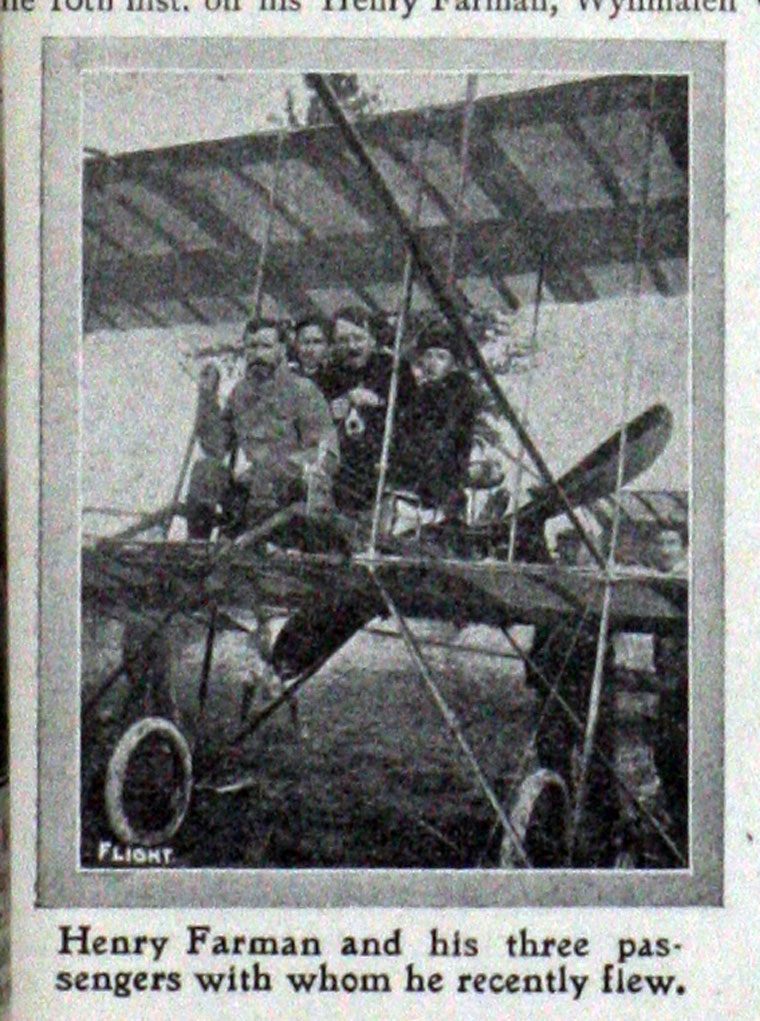 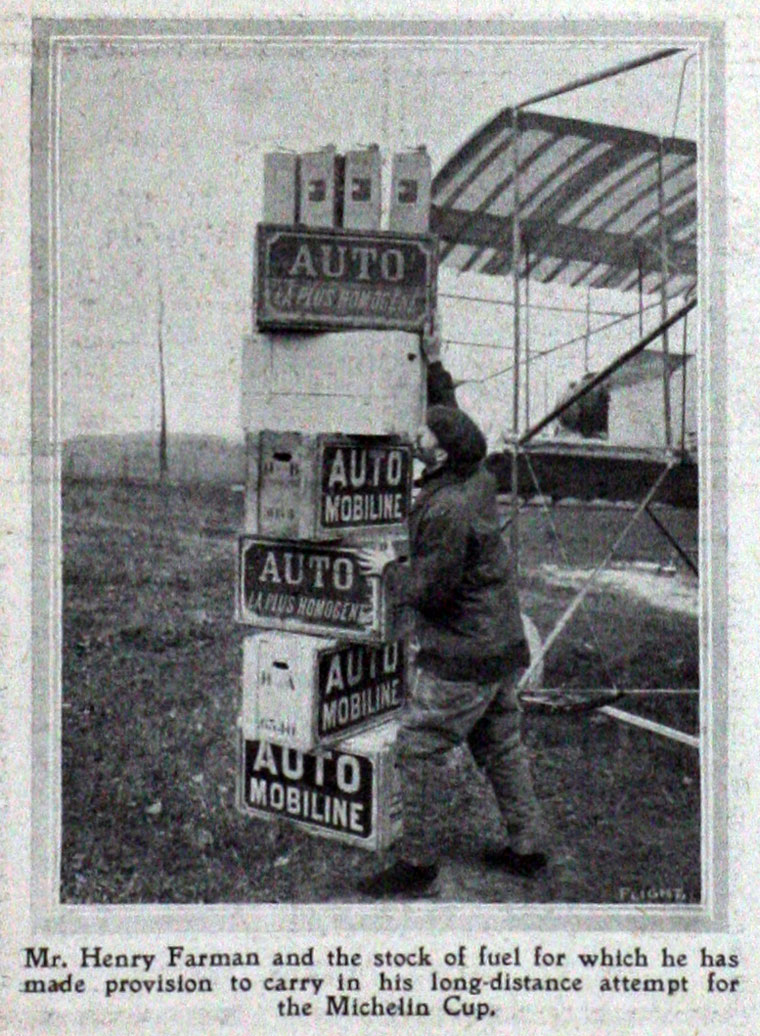 Henri or Henry Farman (1874-1958) was a French aviator and aircraft designer and manufacturer with his brother Maurice Farman.

1874 May 26th. He was born in Paris, and was baptised as Harry Edgar Mudford Farman. He was a son of Thomas Frederick Farman (1845-1921), the Paris correspondent of the London Standard. His father was born in 1845 at Layer Marney, Essex. His mother, Sophia Ann Louisa Mudford, was born in Canterbury, Kent, and was a daughter of the author William Mudford.

Farman trained as a painter at the École des Beaux Arts, but quickly become obsessed with the new mechanical inventions that were rapidly appearing at the end of the 19th century. Because his family had the money, he was able to pursue his interest as an amateur sportsman.

In the 1890s, with his brothers Maurice and Richard, he was amongst the first to take up the sport of bicycle racing using the new pneumatic tyres[1]. He became a championship cyclist and, at the turn of the century, he discovered motor racing, competing for Renault in the Gordon Bennett Cup.

1904 FARMAN, Messrs. Henri and Maurice, 10, Rue Notre Dame de Lorette, Paris (private address); Rue des Acacias (business address). Are the sons of the Standard correspondent in Paris. At fourteen they began their career as professional cyclists by winning a number of prizes in French races. In 1892 Henri became bicycle champion of France, and the following year his brother Maurice took the French Championship from him. In 1895 both brothers rode tandem, and found nobody to beat them until 1897, Owing to this fact they were nicknamed the "Virgin team." When the first motor-tricycles came out, both brothers began hiring machines from different makers, and soon became very expert motorists. Henri won the first motor-tricycle race, the Cote de Chanteloup, with a 1.75-h.p. tricycle. In 1901 Henri began racing in earnest, and won the Pau 150 kilometre race on a light Darracq. In the same race Maurice came in first in the heavy cars section. In May, 1901, Henri got in fourth in the Paris-Bordeaux race of that year; he then drove a Panhard. It was also on a Panhard that he took fourth place in the 1901 Paris-Berlin race. In 1902 Maurice came in first in the French Northern Circuit, or alcohol race. Henri took second place in the same race. In the 1902 Paris-Vienna race Henri got in first in spite of an accident, which delayed him two hours. It was an accident that obliged him to abandon the Paris-Madrid race at Vendome. In the Irish race for the Gordon Bennett Cup Henri had a puncture, his reservoir leaked badly, and his brake refused to act, but he got in third, ten minutes after the winner. Henri and his brother Maurice have a tremendous amount of pluck, and though brought up in France, and earning their living there, they are still essentially British in character. Henri is now in business with his brother Dick, and according to all accounts is doing well. Both the racing brothers believe that very few of the present big factories make any money; they are obliged to spend too much in experimenting. They assert that the future of the motor trade lies in the building of cars for industrial and commercial purposes, more than, as now, for pleasure or recreation. [2]

When Gabriel Voisin began to produce a powered aeroplane for sale in 1907, Farman was one of his first customers. He set numerous Official Records (though still well short of those achieved by the Wright Brothers) for both distance and duration. These include the first to fly a complete circuit of 1 kilometre (January 13, 1908) and 2 kilometres (March 21, 1908). On the latter date he is also recorded as becoming the first ever aeroplane passenger, flown by Leon Delagrange.

Later in 1908, on October 30, Farman went on to make the first cross-country flight in Europe, flying from Chalons to Rheims (27 kilometres in 20 minutes).

After designing his own aeroplane, on May 30, 1908, he took Ernest Archdeacon for a 1,241 metre flight at Ghent, Belgium. Although his own flight as a passenger should take precedence there is some evidence that on or around this date he made the first flight with a woman passenger.

In 1909, he made further record breaking flights of 180 kilometres in just over 3 hours (at Rheims on August 27) and 232 kilometres in 4 hours 17 minutes and 53 seconds (at Mourmelon on November 3). On August 28, he was the pilot of the first 3-person flight when he carried 2 passengers for 10 kilometres.

1911 At this time, Maurice's designs were approaching the "aerobus" whilst Henri favoured the biplane which possesses the lightness, the rapidity, and general handiness of the monoplane. Maurice Farman's biplane was said to be able to carry loads of petrol whilst Henri Farman's machine needed to carry much less fuel in travelling a similar distance in shorter time. Henri had also designed a monoplane[3].

In partnership with his two brothers Henri built a highly successful and innovative aircraft manufacturing plant. Their 1914 model was used extensively for artillery observation and reconnaissance during World War I. The Farman Aviation Works's Goliath was the first long-distance passenger airliner, beginning regular Paris-London flights on February 8, 1919.

He was made a chevalier of the Legion d'Honneur in 1919 and retired in 1937, when the French government nationalized the aircraft industry.

1958 July 18th. Henry Farman died in Paris and is buried in the Cimetière de Passy in Paris.

The machine is of the Chanute type which appears to have greater stability than the aeroplane was believed to possess. During his many experiments Mr. Farman was on one occasion caught broadside by a strong gust, when the apparatus sailed with the wind in a perfectly horizontal direction. Constructed by Messrs. Voisin Freres, who have specialised themselves in the building of aeroplanes, the original Farman machine was composed essentially of two transverse planes, at the centre of which was a skeleton of ash at right angles terminating in a box-shaped cell at slightly above the horizontal level of the transversal planes.

The actual machine in which the successful flight was made was slightly different at its rear end from the original type, as may be seen in the engravings. The two transversal planes have a length of 33ft. 6in., and their width is 6ft. 6in. The distance between the top and bottom planes is 5ft. The light ash girder extending at right angles to the rear of the main planes has a length of 14ft. 9in., and the rectangular cell which it carries has a length of 19ft. 7in., and is 6ft. 6in. square. This box-shaped plane was covered on four sides with a light varnished fabric, and the same material is also used on the main planes.

The total surface offered by the machine is 170.5 square feet. The aeronaut sits between the two main plain's, where he has command of the propelling mechanism, consisting of an 8-cylinder Antoinette engine, developing about 50 horse-power. This type of engine has been designed especially for aeroplane experiments, and it is largely due to engine builders obtaining such remarkable results in the reduction of weight that mechanical flying has become possible.

The engine drives a two-blade propeller immediately behind the main planes, the diameter of these blades being 6ft. 7in. The steering apparatus is at the rear. The machine is mounted on pivoted wheels to allow of its travelling along the ground before taking flight.

Having got complete mastery over his machine, and being assured that it was in proper running order, Mr. Farman carried out some private tests on Saturday of last week with such good results that he convened the judges of the Aero Club to an official test on the following Monday. The conditions imposed for winning the prize were that the competitor had to cross a line between two posts placed 50m. apart, and, flying to a flag 500m. distant, turn round and finish across the line without having touched the ground.

He glided round very easily at a much sharper curve than would have been (teemed possible, with only a slight inclination of the planes, and then continuing with a flat curve behind the post for about 50 yards or so, he turned again somewhat sharply and steered almost straight home, crossing the line at almost the point where he started. He brought the machine to the ground as gracefully as a bird, without any shock.

The whole performance gave one the impression of the flight being carried out with perfect ease, while there appeared to be no reason why Farman should not have continued for a much longer time. As a matter of fact, to escape the attentions of a particularly enthusiastic crowd, he flew off to the shed where the machine is kept, as if it were the most natural thing in the world. The time that elapsed from the start to the finish was 1 min. 28 sec., the actual distance covered being probably a little over a mile.

Having thus secured the most coveted prize for mechanical flight, Mr. Farman intends to try for the prizes which are being offered in England. He thinks he will have no difficulty in securing the prize for the mile in a straight line, and he has also been engaged to fly round the Brooklands track.

Mr. Farman has no intention, however, of continuing his experiments with his present type of machine, which he considers to have a certain defect in that it is not capable of travelling at sufficiently high speeds to be able to fly against any strong wind. Obviously, it is quite possible it could be made to fly faster by the application of more suitable propellers. On the other hand, the machine seems somewhat fragile, and may possibly not be able to withstand the resistance offered when travelling against strong winds, since an appreciable surface must be presented by the numbers of struts and stays that are employed for strengthening the planes.

Mr. Farman has decided to experiment with a machine of the Langley type, which, while being much less cumbrous, has been shown by experiments with models to be capable of travelling at very high speeds. Obviously, in mechanical flight speed is a very important factor in rendering time machine independent of the varying forces of the wind. The successful flight of Monday last is bound to stimulate interest in the art of mechanical flying, and we may look forward to very rapid progress in the construction and handling of flying machines in the early future.