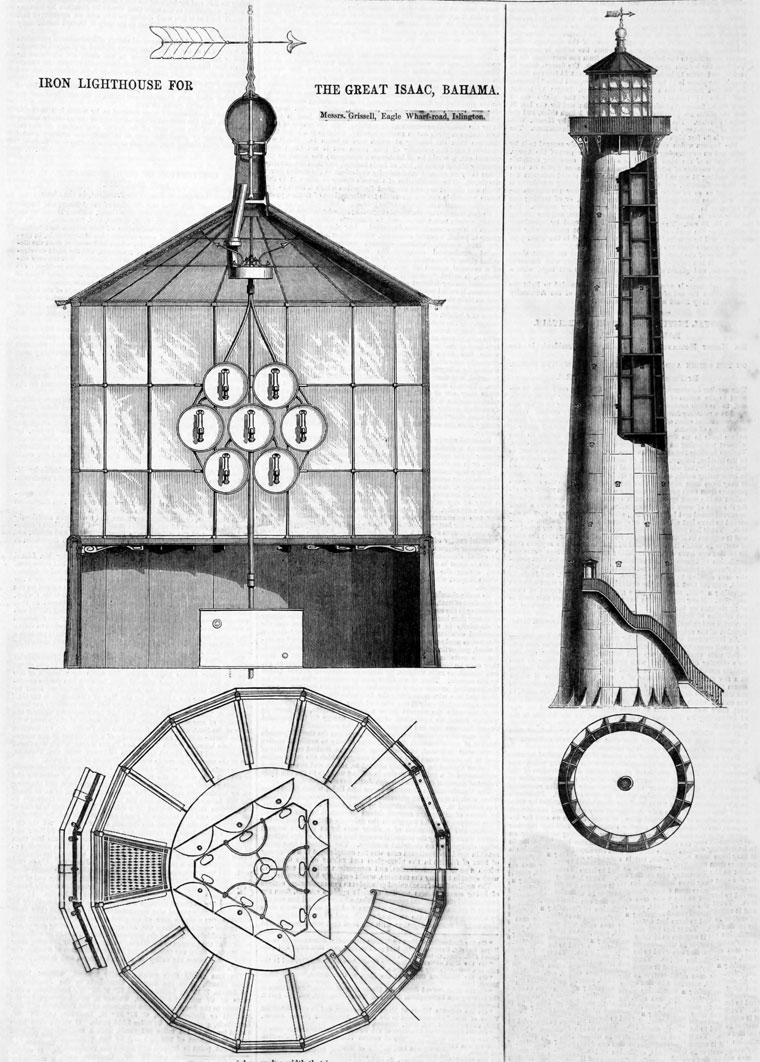 1859. Machinery for moving vessels on slips.

1869. Bathing pavilion for the Viceroy of Egypt

Henry Grissell (1817-1883), sometimes known as "Iron Henry", was an English foundry-man who was responsible for the ironwork in a number of prestigious buildings in England, Russia, Austria and Egypt.

1817 July 4th. Henry Grissell was born in London to Thomas De La Garde Grissell, who worked with the East India Company. He started work with John Joseph Bramah, of the Bramah and Co, known for his intricate castings and metal work.

1841 Grissell start his own business (see Grissell) in partnership with his brother, Martin De La Garde Grissell, at the Regents Canal Ironworks, as ironfounders and contractors.

1858 Martin left the partnership. They worked with the major engineers of the time, including Robert Stephenson, Bidder, Walker & Burges, and Sir William Cubitt.

The company made the ironwork for some major bridges, including at the river Nene, Sutton, Lincolnshire, Great Yarmouth, and the Nile in Egypt, as well as works in Portsmouth and Devonport dockyards. Overseas jobs included waterworks at Vienna, Leipzig, Russia, and various lighthouses. They also made ironwork for Covent Garden Opera House, for the some of the Houses of Parliament and the new museum at South Kensington. He also made the gates for Sir William Tite's Royal Exchange, the gates and railings round Buckingham Palace and at the British Museum.

After the banking crisis of 1866, Henry closed the foundry and developed his interests in Scandinavian timber.

1883 January 31st. He died at his home in Montagu Square and was interred at West Norwood Cemetery in an elaborate Gothic tomb made of iron, constructed initially for his father.

HENRY GRISSELL, son of Mr. Thomas De La Garde Grissell, was born in London on the 4th of July, 1817. His career was commenced under the well-known engineer, John Joseph Bramah; and, in partnership with his brother Martin De La Garde Grissell, he started in business at the Regent’s Canal Ironworks, Eagle Wharf Road, as ironfounders, contractors, &C., about the year 1841. He was thus brought into connection with all the principal civil engineers of the day, having worked for Mr. Robert Stephenson, Mr. G. P. Bidder, Messrs. Walker and Burges, Sir William Cubitt, Mr. John Fowler, &c.

Amongst other large works executed by the firm may be mentioned the bridge over the river Nene, the Yarmouth bridge, the swing railway-bridge over the Stour, large works in Portsmouth and Devonport dockyards, and the waterworks at Vienna and at Leipsic. In Russia, he was the prominent promoter of engineering works carried out in that country by English industry. He also built the Calf Rock Lighthouse, Bahamas High Rock, and many other small lighthouses. The present Italian Opera House, Covent Garden, with its Floral Hall, and in earlier dayas portion of the ironwork for the new Houses of Parliament were entrusted to the firm. A great part of the South Kensington Museum was his work, as well as the gates at the Royal Exchange, the gates and railings round Buckingham Palace and at the British Museum.

The late Mr. Robert Stephenson had a very high opinion of Mr. Henry Grissell, which was reciprocated with the greatest veneration. All Mr. Stephenson’s bridges in Egypt, and in many other places, besides other massive cast iron work, were constructed by Messrs. Grissell. These were the large bridges over the Nile at Benha, Berket-el-Saba, and others ; the original steam-ferry at Kaffr-Azayat, the large viaduct and swing-bridge on the site of the ferry, which it superseded; a bathing-kiosk, or river-palace, which was a gorgeous and costly structure, mainly formed of cast-iron, but fitted within with choice and expensive materials. The shell of the building was temporarily erected on premises belonging to Messrs. Grissell, at the Isle of Dogs, and it was an object of great attraction. Every fitting was prepared, including a large quantity of beautiful floor tiles by Minton, much parquetry-work, stained-glass for domes, &c. But the kiosk was never erected ; for years it remained at Alexandria unpacked, the latest news respecting it being, that a more practical successor to the vice-regal throne had determined to utilize the structure by converting it into a railway station.

The famous Sutton bridge in Lincolnshire, was another important work constructed by Messrs. Grissell for Mr. Robert Stephenson. No man could be more devoted to his business than was Henry Grissell; his work always possessed charms for him, and the love of his art was carried to such an extent as to make it almost a mania. He scarcely ever had a contract but he must do something, at his own cost, to improve the details; and he would frequently lose his profit by this process of French-polishing other people’s work; in most cases it was unappreciated, sometimes it even led him into trouble. Notwithstanding all this, what he did was honestly meant, he being entirely free from ambitious notions or unjust motives.

During the last ten years of his life he purchased large sawmills and forests at Hernosand, Sweden, which he worked with untiring energy till he died. He was often known amongst engineers as 'Iron Henry,' and was loved and respected by all with whom he was associated. He was ever a friend to rich or poor, and ready to give succour and advice to all who needed it.

Mr. Grissell was elected an Associate on the 7th of March, 1843, and for many years was a frequent attendant at the meetings.