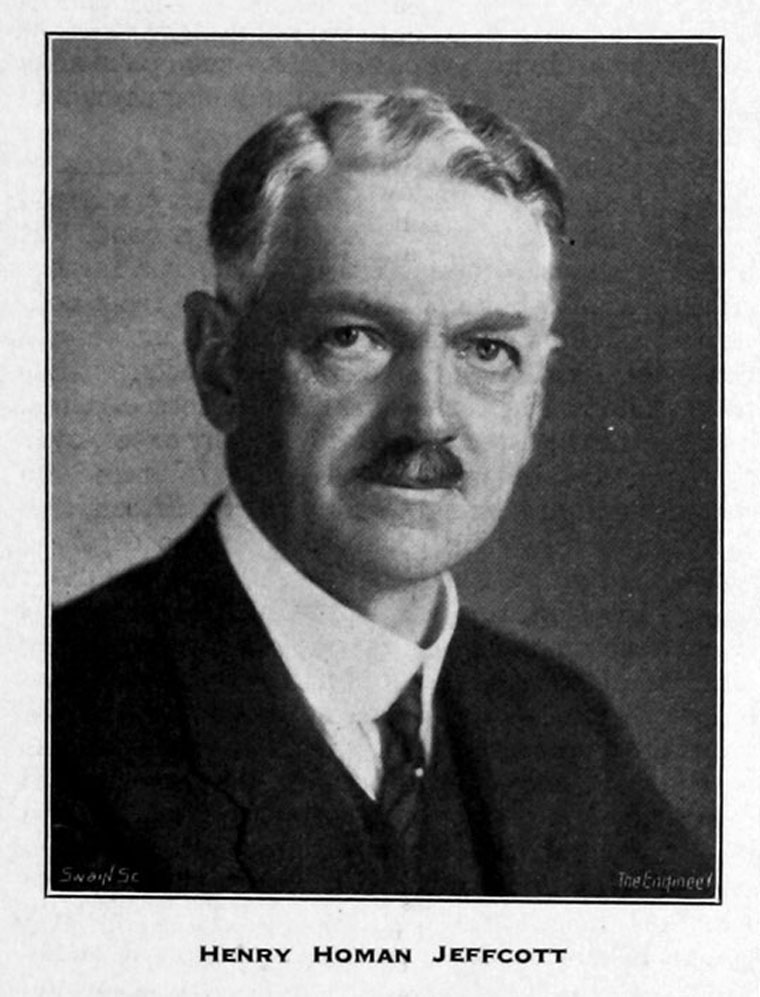 HENRY HOMAN JEFFCOTT, Sc.D., was known to a very large number of engineers by his work as secretary of the Institution of Civil Engineers, a position which he had occupied since 1922. Dr. Jeffcott was born in Co. Donegal in 1877 and was educated in Londonderry and Dublin. In 1895 he entered Trinity College, Dublin, and after graduating in 1899, he studied for a further three years at the engineering school of the college, where he had a distinguished career.

He then joined Messrs. Siemens Brothers and Company, Ltd., as assistant engineer and was engaged at their works at Woolwich and Stafford, on the design of dynamos and motors. From 1904 to 1905 he worked in the shops at the Openshaw works of Sir W. G. Armstrong, Whitworth and Company, Ltd., and gained special experience in gauge making, accurate screw-cutting, and surfacing.

He was appointed head of the Metrology Department of the National Physical Laboratory, Teddington, in 1905, and took charge of the experimental work in connexion with screw threads, pipe flanges, and bolt heads. He was also concerned with the standardization of screw threads, the verification of surveying apparatus for base-line measurements, and the testing of measuring machines. Five years later he returned to Ireland as professor of engineering in the Royal College of Science for Ireland, Dublin, a position which he held until his appointment to the Institution of Civil Engineers. During the War he adapted the lathes in the college workshops to the manufacture of munitions and designed and constructed additional turret lathes for the purpose.

He was secretary of the Water Power Resources of Ireland Sub-Committee from 1918 to 1921 and was associated with Sir John P. Griffith in preparing a hydro-electric power scheme for the river Liffey. In addition, Dr. Jeffcott was examiner in mechanical engineering in the University of Belfast and in the National University of Ireland. He was the author of numerous technical papers on screw threads, whirling of shafts, electrical transmission lines, hydro-electric schemes, and surveying instruments, which he presented before various engineering and scientific institutions, including "Screw Threads" and "Milling of Screws and other Problems in the Theory of Screw Threads", which were published by The Institution of Mechanical Engineers in 1907 and 1922 respectively. Among the various inventions of which he was patentee, the best known was his direct-reading tacheometer.

"...the deepest regret that we have to record the death at his home at Walton-on-Thames, Surrey, on the morning of Tuesday, June 29th, after a long illness, of Dr. Henry Homan Jeffcott, the Secretary of the Institution of Civil Engineers. Dr. Jeffcott was the second son of William Jeffcott, Justice of the Peace, and was born in County Donegal on February 6th, 1877. From 1895 to 1899 he was educated at Trinity College, Dublin, and then proceeded for three years to the Engineering School at Trinity College, Dublin, where he..."[More]