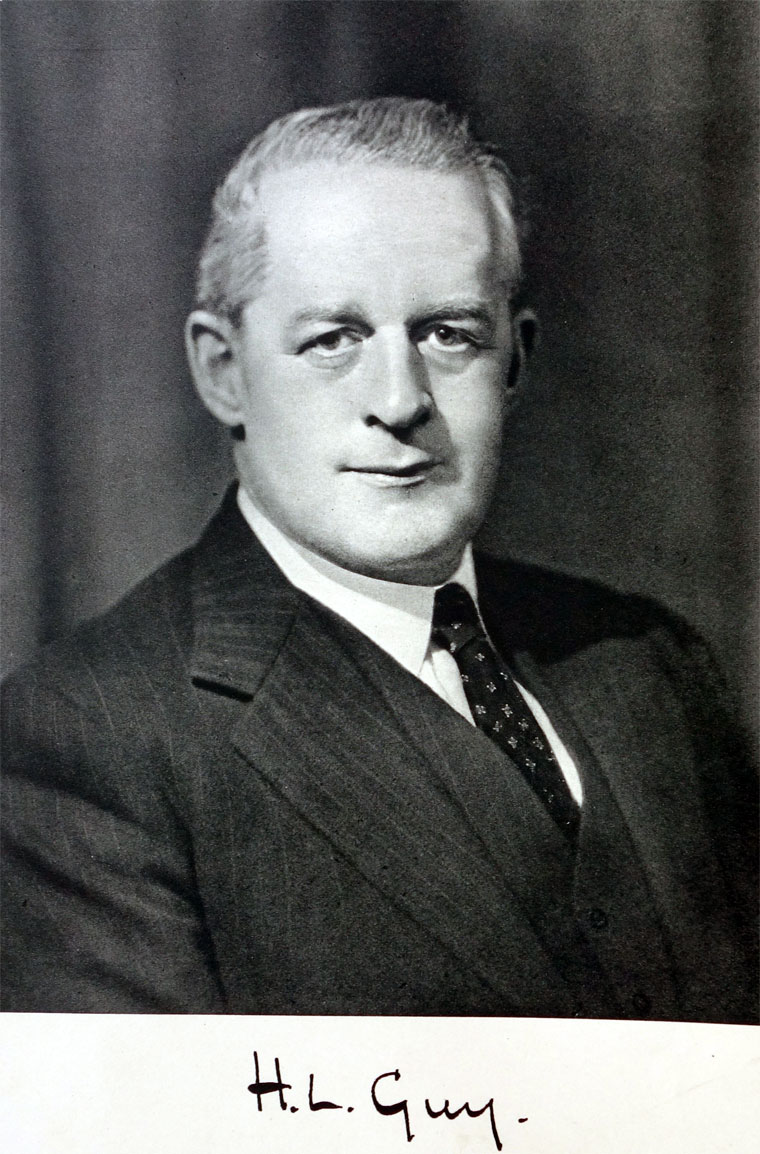 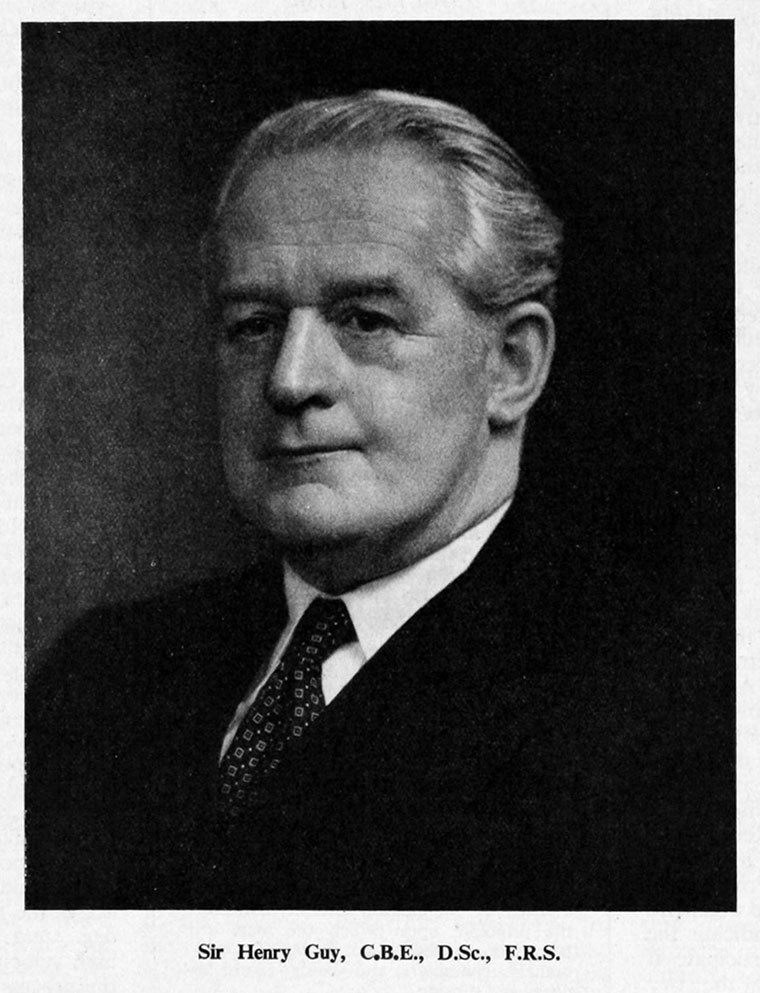 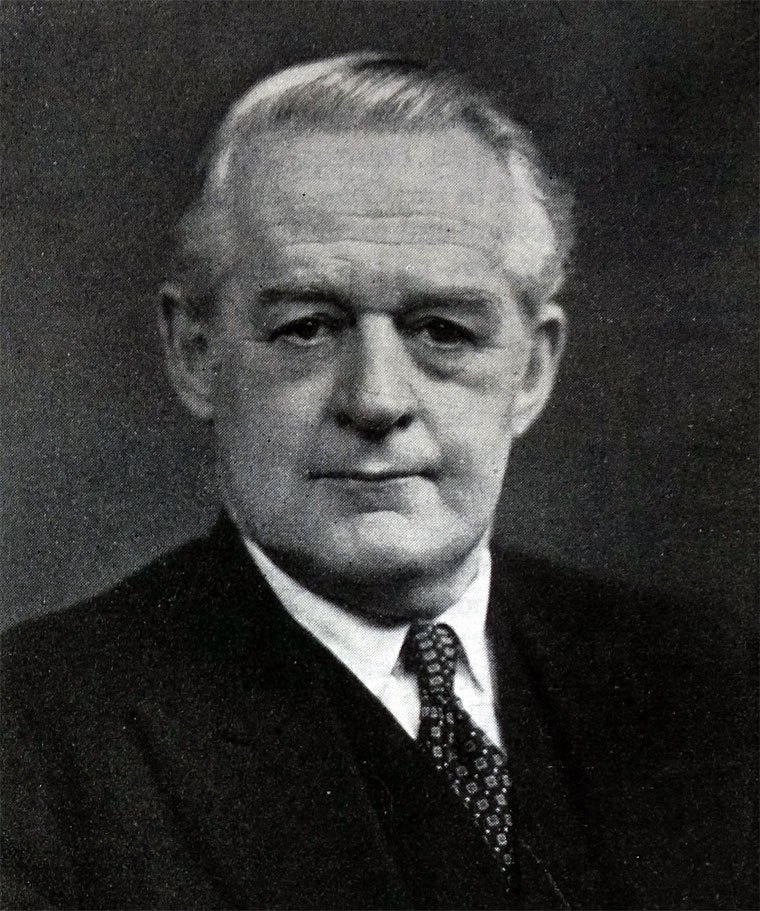 Sir Henry Lewis Guy (1887–1956), mechanical engineer and secretary of the Institution of Mechanical Engineers. He was notable in particular for his work on steam turbine design.

Following his education he joined the Taff Vale Railway as a student apprentice, and studied at the University College of South Wales where he gained a diploma in mechanical and electrical engineering.

In 1915, Guy joined British Westinghouse, (later to become Metropolitan-Vickers) as a design engineer.

In 1918 he was appointed chief mechanical engineer at that company, a post he was to hold until 1941. Whilst at Metrovicks, Guy was responsible for many innovations in the design of steam turbo-generators.

Guy was elected a Fellow of the Royal Society in 1936.

During WWII, Guy served on a number committees including the Scientific Advisory Council of the Ministry of Supply. He was awarded a CBE in 1943 followed by a knighthood in 1949.

From 1941 until his retirement in 1951, Guy was secretary of the Institution of Mechanical Engineers.

IT is with deep regret that we have to record the death last Friday of Sir Henry Guy, C.B.E., D.Sc., F.R.S., who was Secretary of the Institution of Mechanical Engineers from 1941 to 1950. He was 69 years old.

The details of Sir Henry's life can be quickly touched upon. His first major contact with engineering seems to have been on the Taff Vale Railway, where he was a pupil under the late Mr. T. Hurry Riches.

From 1907 to 1910 he studied at the University College of South Wales, proving himself academically brilliant by gaining College diplomas in both mechanical and electrical engineering simultaneously. Even at that early age he was clearly a glutton for work. Later he won the Bayliss prize of the Institution of Civil Engineers, a Royal Research Scholarship and a Whitworth Exhibition.

In 1910 he joined the technical staff of the British Westinghouse Company, in 1915 he became its centrifugal pump and turbo-compressor engineer, and in 1918, so quick was his rise, he was chief engineer of that company's successor, the Metropolitan-Vickers Electrical Company, Ltd. Later he became a director of the Metropolitan-Vickers Electrical Export Company.

In 1939, with war looming on the horizon, he was invited to join the advisory Council on Scientific Research and Development and later he became chairman of its Gun Design Committee and of its Static Detonation Committee (Bombs). He was also appointed chairman of the Committee on Armament Development, and he presided over other committees concerned with armament research and development and the technical organisation of the Forces.

In 1944 he became a member of the Advisory Council to the Committee of the Privy Council for Scientific and Industrial Research, and in 1945 he was appointed chairman of the D.S.I.R. Committee on the Essential Requirements for Research in Mechanical Engineering, which led to the setting up of the Mechanical Engineering Research Laboratory at East Kilbride. Sir Henry was created a knight in 1949.

But how little one can learn about a man from a mere recital of posts held and honours bestowed! The things that really count in our estimation of a man are far more personal. Many a man has risen to as high a position, served upon as many committees, and had greater honours bestowed upon him, and yet made far less mark upon his times than did Sir Henry. No man, it is said, is irreplaceable; and in the sense that others can always be found who can carry on a job the remark is true. But no man of character can ever do a job just as his predecessor did it. Sir Henry had so strongly marked a character that far from being moulded by the jobs he did he left his mark strongly upon them. So strong, indeed was his character that it made him enemies as well as friends. For having used his fine brain to think out exhaustively an answer to every problem that was presented to him, he was impatient of criticism and angered by opposition. To work with him it was needful to be prepared to fight hard to justify rationally opinions that differed from his. But to follow, to accept his leadership was to receive swift and full encouragement and all the backing that he could give. Particularly was his support and encouragement always readily given to younger men.

The major change in Sir Henry's life came in 1941. He was then, as we have related, chief engineer of Metropolitan-Vickers and a director of its export company. He had also for three years been a Vice-President of the Institution of Mechanical Engineers. To all appearances quite suddenly, he gave up the prospect of becoming President and offered his services to the Council in the capacity of Sir Henry Guy, C.B.E., D.Sc., F.R.S. Secretary. What prompted him to do it? Surprised members of the Council, no doubt, asked themselves that question. But, being wise, they did not let the question unduly trouble them. The prime point was that an outstanding figure was offering to take on the job of Secretary just when, in the midst of war, it would have been hard indeed to find anyone at all of sufficient stature. That it meant to Sir Henry a heavy financial sacrifice - for he had necessarily to resign from his posts with Metropolitan-Vickers - was Sir Henry's affair, not theirs. The offer, whatever prompted it, was eagerly seized upon. Now, looking back upon the event, it is easier to have some glimmering of understanding of what was going on in Sir Henry's mind. As an up and coming junior in the Metropolitan-Vickers organisation, young Henry Guy had, no doubt, been happy enough.

He had more to do with technicalities than policies. But upon reaching more exalted altitudes he became more aware how, in the 'tween-war days of depression and partial depression, questions of policy were having a bearing upon technical developments. The situation irked him. As Secretary of an Institution he would have a freer hand.

Moreover, it is by no means impossible that he already foresaw that he had a major part to play in winning the war. For he could hardly have served with such great distinction on the many committees which we have mentioned had he not been independent of commercial attachments. Furthermore, he had for years held the fortunes of the Institution close to his heart and he probably foresaw, not only that the character of the Institution was changing, but that the change ought to be encouraged, that it must become after the war a great national Institution rather than the more intimate society it had once been if it was to continue to serve its purposes. Certainly during his Secretaryship Sir Henry greatly raised the prestige of the Institution. There can be traced to his influence the creation of that machinery by which the three major engineering institutions of this country now consult together, instead of aloofly going their separate ways; and he had much to do with the setting up of those conferences by which the major British institutions are linked with similar bodies abroad. It was no doubt upon the ground of increasing the prestige and national and international influence of the Institution that he based his support and enthusiasm for the amalgamation with the Institution of Automobile Engineers. It is, indeed, probable that he would have liked to have gone further and to have drawn into the Institution as "Groups" or "Sections" certain other societies within the mechanical engineering field which he may have felt should never have been allowed to have a separate existence, thus creating a great Institution, the sole representative of mechanical engineering in Britain.

But his life ended in sadness. The closing years of his Secretaryship were marred by the storm of criticism aroused amongst a considerable minority of the members of the Institution about the amalgamation. Any thought of further amalgamations, if Sir Henry had ever held them, were now clearly out of the question; worse, much of the animosity aroused was directed at the personality of Sir Henry himself - and worse still, Sir Henry's health was failing. He had always been a glutton for work but he had drive himself too hard during the war.

In falling health he was in no fit state in the post-war years to meet with equanimity the criticisms and the pin-pricks of those who opposed the amalgamation. He took it all much too much to heart and his health further suffered. Resignation at last became inevitable. His friends - and, though his enemies made the greater noise, he had very many of them - hoped that relieved of cares and anxieties, he would recover health. But - alas! - it was not to be. Slowly health continued to ebb away. A great man died last Friday.

SIR HENRY LEWIS GUY, C.B.E., D.Sc., Wh.Ex., Hon. M.I.Mech.E., F.A.S.M.E., F.R. S., who until his retirement due to ill health in January 1951 had been Secretary of the Institution for nearly ten years, died aged sixty-nine on 20th July 1956 at his home, Enniskerry, Ravine Road, Canford Cliffs, Bournemouth. He leaves a widow and two married daughters, one of whom is the wife of Mr. J. A. W. Gill, M.Sc. (Associate Member), and the other of Mr. V. de Lisle Dear, M.A. (Associate Member).

Sir Henry, who was born on 15th June 1887, began his career as a pupil to Mr. T. Hurry Riches, Chief Mechanical Engineer of the Taff Vale Railway and President of the Institution of Mechanical Engineers in 1907-8. From 1907 to 1910 he was at the University College, South Wales.

In 1910 he joined the technical staff of the Mechanical Department of the British Westinghouse Company, and. in 1915 was appointed Centrifugal Pump and Turbo-compressor Engineer. From 1916 he served as the Company's Turbine Engineer, and in 1918 became Chief Engineer of the Mechanical Department of its successor, the Metropolitan-Vickers Electrical Company, a post which he retained until his resignation in 1941, during which time he was responsible for inventions and researches directed to the improvement of steam power plant. In 1936, Sir Henry joined the Board of the Metropolitan-Vickers Electrical Export Company.

During and after the 1939-45 war he served on numerous other important Government and industrial committees and acted as Chairman of many of them.

In 1927 Sir Henry was awarded the Thomas Hawksley Gold Medal for the paper which he presented to the Institution on 'The Economic Value of Increased Steam Pressure'. In 1930 he presented a paper jointly with Mr. H. C. Lamb, on 'Operating Results with the Recent Extensions at Barton Power Station'. Other papers he presented were, in 1929, `Tendencies in Steam Turbine Development', and in 1934, jointly with Mr. E. V. Winstanley, 'Factors in the Design of Surface Condensing Plant'. He was closely associated with the Discussion on Lubrication in 1937, to which he contributed a paper, jointly with Dr. D. M. Smith, on 'Steam Turbine Journal Bearings'. In 1942 Sir Henry gave the Annual Lecture to the London Graduates under the title `Through Trouble to Improvement'. He was also invited by The Royal Society and the Institution of Civil Engineers to give the Fourth Parsons Memorial Lecture in 1939, and was awarded the Parsons Memorial Medal. He has also contributed a number of papers to other engineering societies at home and overseas.

In the New Year Honours List in 1949 he was created a Knight Bachelor by His Late Majesty King George VI for his contributions in the engineering and scientific world.

The years of Sir Henry's secretaryship were years of rapid growth in the membership figures (from 14,225 in 1940 to 35,000 in 1950) and of considerable gain in the authority and prestige of the Institution. His retirement on account of ill health dated from 19th January 1951.

In December 1951 Sir Henry was elected an Honorary Member of the Institution in recognition of his distinguished scientific and engineering attainments and of his outstanding services to the Institution throughout many years.