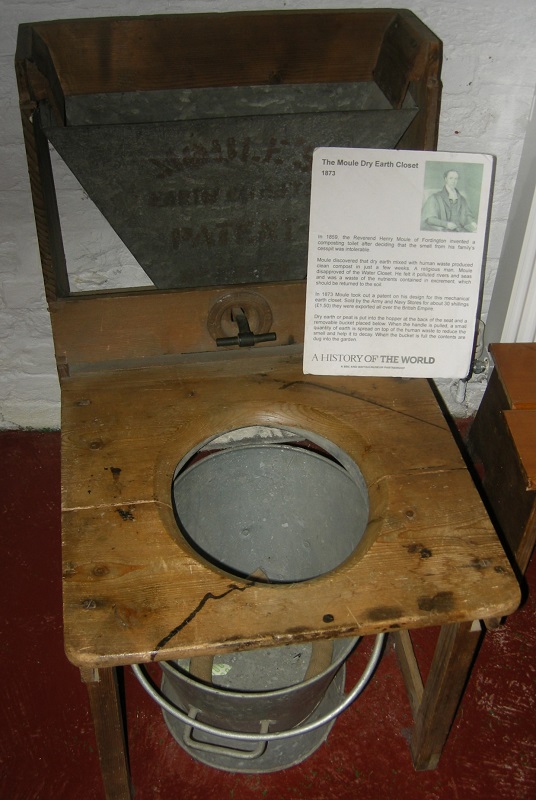 1873 toilet to Moule's patent, on display at Dorset County Museum

Rev. Henry Moule (1801–1880) was a priest in the Church of England and inventor of the dry earth closet.

Educated at Marlborough Grammar School. He was elected a foundation scholar of St John's College, Cambridge, and graduated B.A. 1821 and M.A. 1826.

1823 Ordained to the curacy of Melksham

1824 Married Mary Mullett Evans and they had eight sons

1829 Made vicar of Fordington and remained there for the remainder of his life.

During the cholera epidemics of 1849 and 1854 and noting the insalubrity of the houses, especially in the summer of 1858 (the Great Stink) he turned his attention to sanitary science, and invented what is called the dry earth system.

1860 Patent. '1316. And the Reverend Henry Moule, of Fordington, in the county of Dorset, Clerk, and James Bannehr, of Exeter, Agent, have given the like notice in respect of the invention of "improvements in the nature and construction of closets and commodes for the reception and removal of excrementitious and other offensive matter, and in the manufacture of manure from thence."'[1]

His system was adopted in private houses, in rural districts, in military camps, in many hospitals, and extensively in the British Raj.