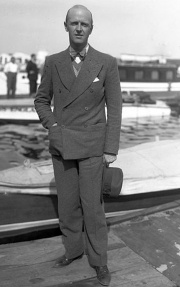 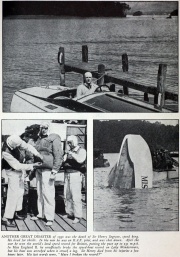 A British national, Segrave was born in Baltimore, Maryland of an American mother and an Irish father. He was raised in Ireland and attended Eton College in England.

In 1919 he transferred to the Royal Air Force Administrative Branch, but soon resigned his commission due to his wounds. Segrave bragged that he would drive a car at over 200 miles per hour. People thought that the war had made him mad.

He was the first Briton to win a Grand Prix in a British car. He won the 1923 French Grand Prix and the 1924 San Sebastian Grand Prix at Circuito Lasarte (Spain) in a Sunbeam automobile. After a further win at Miramas in France, he retired from racing to concentrate on speed records.

On 21 March 1926, he set his first land speed record in his 4 litre Sunbeam Tiger Ladybird on the sands at Southport, England at 152.33 mph. This record lasted for almost a year, until broken by John Godfrey Parry Thomas driving Babs

Segrave set his final land speed record at 231.45 mph in his new car, the beautiful Golden Arrow, at Daytona Beach on 11 March 1929. This car had only 18.74 miles on it, which is the least used car to set the record. After being the first person on the scene of Lee Bible's death, Segrave began concentrating on the water speed record. Golden Arrow has never been used since.

After his 1929 land speed record, he went to Miami for a motorboat race against Garfield Wood, multiple water speed record holder and the first man to travel over 100 miles per hour on water. Segrave won, causing Wood's first defeat in nine years. After Segrave returned to Great Britain, he was knighted for his many accomplishments.

A few months after receiving his knighthood, on Friday 13 June 1930, Sir Henry Segrave unknowingly captured the water speed record driving Miss England II on England's largest natural lake, Windermere. In a follow up run the boat presumably hit a log and capsized, killing Miss England's mechanic, Victor Halliwell. Segrave's unconscious body was recovered, and taken to a hospital. He regained consciousness for a moment, was informed that he had indeed broken the record, then died a few moments later of lung hemorrhages.

When Segrave's interest in flying returned in the late 1920s he designed an aircraft for luxury touring. The aircraft was a wooden twin-engined monoplane built as the Saro Segrave Meteor, three metal versions being built as the Blackburn Segrave.