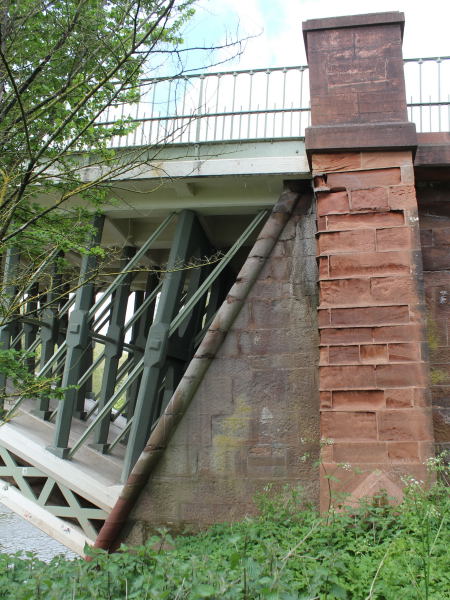 Crosses the River Severn at Holt Fleet, north of Worcester

In 1928 the bridge underwent considerable modification to strengthen and widen it, without spoiling the elegant appearance. The arch ribs and spandrel columns were reinforced with steel bars. Unusually for the time, these were electrically welded at selected points to the cast iron. The intrados and part of the extrados were constructed in the form of solid vaulted arch slabs of reinforced concrete. The cast iron decking was replaced by a reinforced concrete beam and slab deck supported by the spandrel columns and bracing. The abutments and wing walls were strengthened by reinforced concrete and faced with sandstone to match the original. The cost was £11,600, about half the cost of a new bridge. The contractor was the Yorkshire Hennebique Construction Co Ltd, to the design of B. C. Hammond (Worcestershire County Surveyor) in consultation with M. Boulongne and M. Gueritte. [3]